The Keys to Taking Your Best Restaurant Dishes Off-Site

For as much as taste and texture are touted, the saying that people eat with their eyes still holds true. That’s the case not only at fine-dining establishments where aesthetics skew toward art, but also at more casual restaurants. Even items as humble as a sandwich or noodle bowl are cast in a different light when properly plated.

Among other experience-driven attributes, the pandemic has stolen the conventional means of presenting dishes. For many restaurants, that has meant re-engineering dishes and re-imagining menu options.

“In terms of how it will be presented, I still believe food looks best on a plate,” says chef and restaurant owner Kevin Ordonez. “Unfortunately, COVID took away so much from everyone, and one of the hard pills for us to swallow was learning that you can’t put hospitality in a box and send it home.”

Ordonez trained at the Culinary Institute of America before diving into the world of fine dining. He brought those techniques and standards to a more relaxed setting with his ramen concept, Alkaline, in Norfolk, Virginia, while leaving behind other trappings of fine dining, like the rigid environment and high ticket prices.

But despite a less fussy operation, Ordonez still put a great emphasis on the presentation of his signature noodle dishes. That’s not to say Alkaline didn’t do off-premises business, but it was miniscule, accounting for about 10 percent of sales prior to the pandemic.

“Not only is our food—ramen—not so great with takeout, but also Alkaline was always designed as a best-experienced-in-person type of place. [As of January], there are nights where takeout might account for 80 percent of the sales,” Ordonez says.

The challenges were even more pronounced at Baby Izakaya, a new concept Ordonez opened in Virginia Beach just before the pandemic began. Modeled after its namesake of traditional Japanese gastropubs, Baby Izakaya was designed as an intimate venue where guests would rub shoulders with strangers and revel in the commotion. While it was impossible to re-create that atmosphere and experience at home, Ordonez and his team could—and did—finagle the menu of small plates, Asian barbecue, and noodles for off-site consumption.

“We basically opened three or four different versions of Baby Izakaya all within about seven months,” he says. First it was a restaurant, then a takeout-only operation, then a commissary for preparing free meals for healthcare workers, and finally an open-patio restaurant. “We joke about it, but actually each version of Baby Izakaya offered a completely different menu,” Ordonez adds.

Like ramen, sandwiches may intuitively seem better suited for takeout and delivery than, say, filet mignon or tuna tartare. But barring limited-service concepts that specialize in to-go orders, sandwiches can also be a tricky food to take off the proverbial plate.

“When people look at sandwiches, they think that they are a lunchtime thing. You put meat in it, you put cheese in it, you add sauce maybe, and bread, and the dish is done. They don’t really think of it as a composed plate of food,” says Mason Hereford, chef and owner of Turkey and the Wolf in New Orleans.

Although Turkey and the Wolf is a laid-back, limited-service sandwich shop, it has generated the culinary respect usually reserved for fine dining. Bon Appetit even named it America’s Best New Restaurant in 2017. Hereford did not study within a formal culinary school setting but instead became a chef through on-the-job training at fine-dining restaurants like Coquette and the now-defunct Sweet Olive. 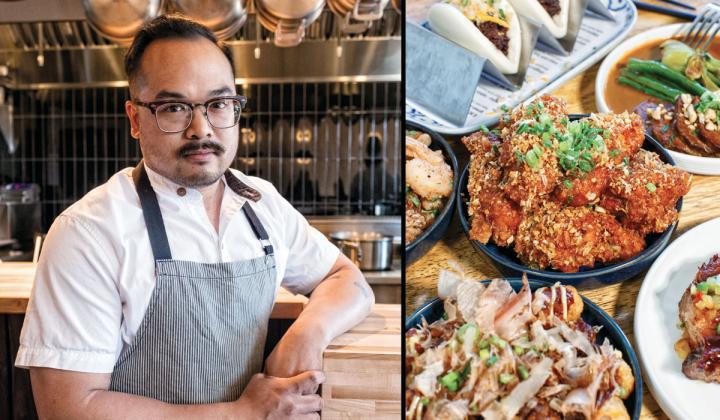 Chef Kevin Ordonez was inspired by quick-serve techniques for adapting dishes from Alkaline (right) and Baby Izakaya during the pandemic.

“So much of what I did working at fancy restaurants was finding balance and composure in dishes and layering flavors. We took that same requirement for a dish to be a complete dish that could really make someone crave it and hold it in high esteem,” he says.

In normal times, that attention to detail was a boon; dine-in business accounted for roughly 90 percent of sales. The early days of COVID-19 reversed the split. After operating under a takeaway-only model for a time, Turkey and the Wolf now does about half-and-half, with off-premises still slightly edging out on-site.

Given this shift, Hereford had to consider how transit could affect not just flavor but also appearance. After all, social media has upped the ante on aesthetics. Back-of-house logistics also came into play. Turkey and the Wolf’s collection of carefully constructed sandwiches requires both time and technique.

“I could cook a steak way faster than I cook everything for sandwiches and layer them up,” Hereford says. “I don’t think that we’re in a better position than a fine-dining place to have closer-to-normal sales.”

Hereford recently partnered with Incogmeato, a new line of plant-based meat alternatives, which has allowed him to not only beef up the menu but also prepare for uneven volumes. Unlike more perishable ingredients, the alternative protein can be frozen without compromising quality. Plus, the new menu item featuring Incogmeato helped Turkey and the Wolf generate buzz on social media.

Ultimately the key to taking dishes off-site may come down to perspective. Instead of striving to perfectly translate a menu item for takeaway, restaurants have the opportunity to re-imagine their offerings. For Ordonez, that has meant finding inspiration in unlikely places.

“I find myself looking more deeply at fast-food operations like Chick-fil-A and trying to dissect how their food is still so good, even to-go. It’s forced me to see if I can find some commonality between fast-food operations and restaurants like mine,” he says. “Five to 10 years ago, you wouldn’t have ever caught me trying to compare myself to a fast-food chain, let alone try to learn something from it.”

The pandemic has also led him to explore the myriad ways food technology has changed how food is prepared, packaged, and consumed beyond a restaurant’s four walls. As a chef and hospitality veteran, Ordonez has no intention of abandoning the dine-in model. That said, he does see presentation potential—and even a bit of theater—in to-go meals.

“The anticipation of seeing the steam slowly billow up from under the lid to reveal the hot food underneath is like when a magician disappears an item and reappears it from a puff of smoke,” he says. “It’s like opening presents on Christmas morning, but they’re filled with food.”