How Korean Flavors Amplify the Menu

The tang and spice of Korean cuisine are taking over American menus.
January 2019 Leigh Kunkel

Scroll through #koreanfood on Instagram and you’ll find more than 4.6 million photos. Even popular American food bloggers like the Minimalist Baker post recipes for homemade gochujang, the spicy fermented chile paste, and rack up thousands of likes and comments in the process. And kimchi is, well, everywhere. It’s safe to say Korean food in the U.S. is having a moment.

Chef Junghyun Park, who recently opened Korean fine-dining hotspot Atomix in New York with wife Ellia, thinks it’s about time. “I had thought about the concept of Atomix for many years now, but I did initially have reservations around how Korean fine dining would be received in New York,” Junghyun says. “But after starting Atoboy, our Korean fine-casual restaurant, and seeing how welcoming and interested diners were in learning more about our new Korean cuisine, I became more confident.”

As natives of Korea with some serious bona fides—including Junghyun’s stint as chef de cuisine at the two-Michelin-starred Jungsik, a Korean fine-dining spot with locations in New York City and Seoul, South Korea—the Parks are intimately familiar with the ingredients and techniques that have suddenly been showing up on menus everywhere. “Personally, I find it both intriguing and educational to see how chefs of different cultural backgrounds interpret their experiences with Korean cuisine,” Junghyun says.

Kona Grill, an Arizona-based sushi chain of 45 restaurants, is interpreting Korean flavors for its American audience. Timothy Griffin, Kona’s director of culinary innovation, recently added several wildly popular Korean-inspired dishes to the menu, including a crispy chicken sandwich made with gochujang and housemade pickles and a spicy flatbread topped with beef bulgogi, the grilled, thinly sliced marinated meat that is ubiquitous in Korean cuisine. “The Korean ingredients pack a lot of depth and bold flavors,” Griffin says. “I think we’re going to be seeing a lot more Korean dishes, influence, and fusion in the future.”

Kona Grill is far from alone in looking to Korea for inspiration. Tastee Diner in Asheville, North Carolina, serves a breakfast sandwich topped with house-made kimchi that has a cult following; Turntable, with three locations of various service levels in New York, offers pickled daikon alongside hush puppies on the menu; and even huge chains like The Cheesecake Factory are getting in on the action with the brand’s Korean Fried Cauliflower menu offering.

But there are still plenty of Korean ingredients and techniques that haven’t hit the mainstream here yet, says Chef David Park of the soon-to-open Jeong in Chicago. “Korean products here are just starting to move past kimchi and sesame oil, and there’s so much more to explore,” he says. “I’m excited to introduce diners to doenjang (soybean paste), chunjang (black bean paste), and omija (a fruit known for five distinct tastes).”

In terms of techniques, both David Park and Junghyun Park see fermentation and preservation as essential to Korean cuisine. “Due to the unique landscape and climate of Korea, many different preservation methods have developed over thousands of years,” Junghyun explains, naming jangs (fermented Korean sauces), kimchi, and jangajji (Korean pickles), among others. “These are all utilized in creative ways in our kitchens, and we hope that they become more well-known to a wider audience.”

Those preserved and fermented products play a big role in giving Korean food its depth of flavor, which is why chef and author of the new cookbook “Korean Home Cooking,” Sohui Kim, loves to use them in unexpected ways. She particularly likes adding gochujang, which she calls her “workhorse” ingredient, to recipes where one might not expect it. “It’s a great thickening agent, with a fantastic kick of flavor. I love the combination of sweet and spicy that it adds to chili, braises, and, especially barbecue sauces,” she says.

As for the future of Korean food in the U.S., Junghyun and Ellia Park have a specific vision they’d like to see realized: the single-item restaurant, which is a popular style of service in Korea.

“These are restaurants that serve just one type of dish that has been perfected to the chef’s standards,” Junghyun says. “Many Korean restaurants here have extensive menus, but I hope we will begin to see these craft-obsessed restaurants that can introduce or re-introduce Korean dishes to their fullest potential.”

David Park, too, hopes that awareness and appreciation of Korean cuisine can continue to grow.

“I hope in the future when people think of Korean food, it won’t be just Korean BBQ,” he says. “There’s so much more to it.” 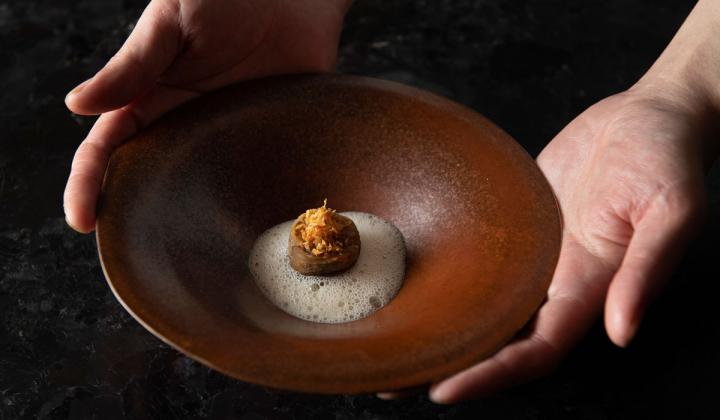 It’s All About Balance

Korean food excels at tying together the five basic flavors, so don’t neglect lesser-used ones like sour and bitter when experimenting with dishes.

Pickled vegetables, also known as jangajji, and kimchi add brightness and color to dishes. Try cucumbers, daikon, or carrots for a tangy addition to any plate.

Bring On The Sides

Banchan, the small side dishes that accompany many Korean meals, are an essential part of the experience. Kimchi, pickles, and hard-boiled eggs simmered in soy sauce are all classic options.