Palabok served at Maharlika in New York City is a rice noodle dish with uni, the edible part of a sea urchin.

Filipino Food is Finally Getting its Due

The multi-faceted cuisine of the Philippines is coming on strong.
March 2017 Amelia Levin

Filipino cuisine seems to be having its moment—finally. Once stereotyped as heavy, grease-laden fried food best consumed with beer, classic Filipino dishes are being revamped by chefs around the country to give the cuisine its due, shining a light onto the breadth and diversity of flavors and foods that make this fare so compelling.

“Filipino cuisine is replete with nuance, but one way to understand it is to look at the history and different colonizers [of the Philippines],” says P.J. Quesada, a third-generation owner of a Filipino foods business and founder of the Filipino Food Movement, a group of chefs and advocates looking to educate Americans about the culinary heritage. Influenced by the flavors of Malaysia, Indonesia, China, Japan, Spain, and—even to some extent—the U.S., this diverse cuisine deserves to move into the spotlight, especially as the census tells us Filipinos make up the second-largest group of Asians in America.

Surprising to many, Spanish colonization, in particular, had a huge impact on the country’s cuisine, as evident by the many dishes sharing the same style and name in both cultures—like empanadas, longanisa sausage, and lechón. But other cultures played a role as well. As a U.S. colony in the first half of the 20th century, there was a strong U.S. military presence, so the Philippines adopted not only English as a second language to its native Tagalog, but also many American food ingredients. Albeit less gourmet foods, like chicken bouillon cubes, Spam, and hot dogs—all meant for convenience.

Some elements and names of dishes from the native cuisine might have been further lost, or muted in translation to the U.S.  When Filipinos immigrated to this country, their English language skills enabled them to earn jobs in engineering, healthcare, and business, according to Lakhi Siap, an active member of the Filipino Food Movement and partner of Isla Pilipina in Chicago. Only a few opened restaurants or entered the food business, so it’s no surprise that the group of Filipino-born and Filipino-American chefs, restaurant owners, and food makers in the States have formed a tight-knit group, all with the same mission to make their heritage more well-known and widespread.

One of those restaurant owners is Nicole Ponseca, of the wildly popular Jeepney Filipino Gastropub and the recently opened Maharlika restaurant, both in New York City. While many choose to define Filipino cuisine by the island country’s lengthy history of colonization, she points out the many regional characteristics that also make dishes vary so greatly from north to south, east to west.

“Filipino cuisine is often described as Asian comfort food, or noted for its Spanish influence, but it goes well beyond that,” Ponseca says. “There are more than 7,000 islands in the Philippines. We may know more about food from the central islands and the capital of Manila, but there are many more regions with a whole legion of dishes that are so underrepresented here in the States. Filipino food is finally gaining its due, and we have an opportunity to go beyond the more premature approach to understand it in a more sincere way.” 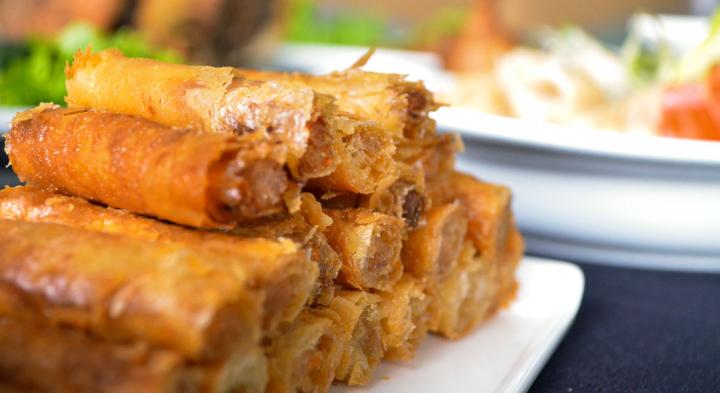 She’s so adamant about this regional-focused definition of Filipino cuisine that, after a recent visit to the Philippines to conduct research for her cookbook, she took her restaurant’s menu offline to rethink and tweak it.

Cavite (pronounced like the dental problem), the province on the southern shores of Manila Bay where her father was born and raised, has become a culinary mecca. It is known for treasuring ingredients introduced by a once strong Mexican presence (immigrants brought by the Spanish as workers)—foods like a salty cow’s milk cheese, reminiscent of cotija, and tamales that use a masa-like flour made, not from corn, but from stone-ground rice, and that are steamed in banana leaves as in the traditional way.

“My mom comes from the north, an area that is driven by farmers who are more thrifty, so the use of meat is not as prevalent because they would rather sell it to make money,” says Ponseca, who notes this region’s cuisine, as a result, can be more vegetable-forward with the use of fermented shrimp and fish sauces.

Regional differences are evident throughout the islands. For instance, venturing into an area in the South Philippines that is less well-known by Americans and that has a predominantly Muslim population, you won’t find the many pork dishes there that characterize the more central parts of the country.

Aside from the cultural and regional influences, Filipino dishes are most recognizable by a heavy use of vinegar and citrus as souring agents meant to cut through some of the richness and likely used as a method of fermentation before the dawn of refrigeration.

“We use three types of vinegar, or suka—coconut, sugarcane, and a certain kind of rice vinegar that’s almost alcoholic in taste,” Ponseca says. “Filipino cooking doesn’t end once food has left the kitchen, because we have these vinegars tableside.” Everyone has their own mixture of sawsawan, or condiments like suka, calamansi (Filipino lime juice), and petis (an aggressively umami-rich and salty fish sauce) used to make personalized dipping sauces.

Vinegar is used heavily in kinilaw, typically known as Filipino ceviche, and prepared with calamansi fruit to “cook” the fish—historically crawfish—in the Philippines. At Bad Saint in Washington, D.C., the tiny, no-reservation Filipino eatery that recently earned the title of the No. 2 restaurant in the U.S. from Bon Appetit magazine, Chef Tom Cunanan uses a spicy cane vinegar for his ukoy, a bright orange ball of shredded sweet potato and shrimp that diners tear off with their hands.

And dinuguan—a take on what people might recognize as morcilla, or blood sausage, but in stew form—uses vinegar as the main acid ingredient to cure the blood, Ponseca explains.

Tamarind, another souring agent, is the main ingredient in sinigang (pronounced sin-ee-gong), a popular, brothy soup with tomato, onions, green or long beans, and other vegetables like cabbage or bok choy. At the Pan-Asian Sunda in Chicago, Chef Jess DeGuzman changes things up by adding sea bass and chayote squash to his tamarind broth. More classic renditions, like those found at Isla Pilipina at the northern end of the city, showcase pork, chicken (manok), shrimp (hipon), or milkfish (bangus), the national fish of the Philippines.

As a child, Ponseca says, she always felt a twinge of embarrassment around her heritage cuisine, especially among non-Filipino crowds.  “My Dad would always eat with his hands, and I used to be so embarrassed by it growing up as a brown kid,” says Ponseca, but adds “at the restaurant we made kamayan eating a special night” and has since seen the trend catch on around the country (at Sunda, for one). In the kamayan style, diners are encouraged to make their own nigiri-like balls using sticky rice and scooping up different meats and vegetables without the food actually ever touching their hands.

Ponseca’s also not afraid to showcase some of the more offal-based dishes, like the aforementioned dinuguan.  And while balut, a boiled, fertilized duck egg embryo, might make some Americans cringe, it’s considered a street-food delicacy in the Philippines and often served with beer as a snack.

Her favorite dish made by her dad—and a popular one at the restaurant—remains arroz caldo, a rice porridge made using homemade chicken stock softly scented with garlic and ginger, chunks of chicken, saffron, and achuete oil, a blood orange–colored finishing oil made from annatto or achuete seeds, which made their way to the Philippines from South America.

Mexican influence can also be seen in adobo, the unofficial national dish of the Philippines and a favorite on many Filipino restaurants in the U.S. It showcases braised meats with rice. Ponseca makes her adobo with chicken thighs braised in cane vinegar, soy sauce, and peppercorns, but the dish can also take on regional nuances. “I discovered an adobo sa gata made with suka and rounded out by coconut milk, and another one, a red adobo, completely omits soy sauce and uses more fish sauce and achuete oil.

At the Asian-inspired pop-up Kraken Congee in Seattle, Chef Garrett Doherty makes his adobo with braised pork belly and swaps the sticky rice base for lugaw, a Filipino rice porridge that’s on the mild side, but meant to be layered with other richer flavors.

Similarly, many Filipino dishes center on pork as the main ingredient—from the addictive, ubiquitous lumpia, Chinese-inspired miniature egg rolls stuffed with ground pork and cabbage or other vegetables, to lechon kawali, a Filipino-style barbecue pork, to sizzling pork sisig.

“In Cebu where I’m from, for our lechon we stuff the pork belly with a lot of garlic, onion, and lemongrass, before roasting it and then serving it with a type of rich brown gravy made with pork liver, sugar cane, and soy sauce,” says Siap, of Isla Pilipina. 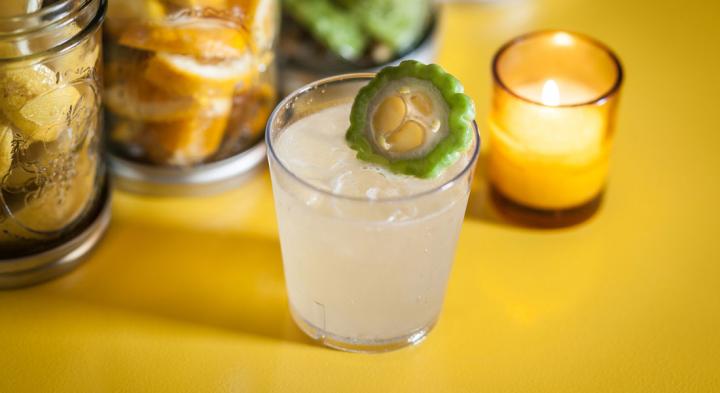 For that signature, sweet Filipino barbecue, Ponseca uses banana ketchup (a Filipino condiment) and sugar cane vinegar for the marinade. Other restaurants, like Isla Pilipina, model the central Filipino version that uses Sprite or ginger ale for the marinade.

Ponseca does, however, use 7UP to make her tocino, thin strips of sweet-cured pork often served for breakfast. The pork marinates for about three days in a mixture of the soda with salt, in the cooler, until it is tenderized, and then boiled or pan-fried to order.

Tselogs, a tapas restaurant in San Francisco, also showcases tocino as one of its silogs, a Filipino breakfast combining meat, eggs, and garlic-fried rice. Longsilog features longanisa, a thick and sweet pork sausage, while tapsilog features tapa, a cured beef similar to jerky.

Another popular breakfast dish in the Philippines is tortang talong, an omelet with a construction similar to the Spanish torta, but with eggplant added instead of potatoes. Solita Wakefield, co-owner of Bistro 7107 in Arlington, Virginia, takes it one step further, adding crab to her rendition. (Interestingly, the 7107 in the restaurant name stands for the number of islands in the Philippines.)

Perhaps the most recognizable Filipino beef dish—at least according to Siap—is kare-kare.  These are oxtails braised in a peanut butter sauce and sometimes vegetables, like bok choy, eggplant, and long beans, and often served with a side of shrimp brine paste.

For dessert, Filipinos and Filipino-Americans clamor for halo-halo, a variable mêlée of shaved ice with a combination that could include sweet beans, coconut, sticky rice, ube (purple potato) ice cream, and leche flan.

Filipino cuisine hasn’t quite achieved mass market appeal or made it on Asian chains around the country, as was the prediction of celebrity chef Andrew Zimmern back in 2012, but that could change just as Korean and Southeast Asian have gone mainstream across U.S. restaurants.