From butternut squash to pumpkin, gourds are a cornerstone of autumnal menus.

Designing a Menu Around the Flavors of Fall

Fall is all about crisp, cool days, getting cozy by the fire, and reaping the benefits of harvest. Mike Kostyo, trendologist at Datassential, notes that full-service restaurants are uniquely positioned to offer the indulgent dining experience customers crave during these days. “Fall has almost become a lifestyle for a certain segment of consumers who enjoy the symbols and signifiers of the season like campfires, changing leaves, warm drinks and soups, and spooky movies,” Kostyo says. “Chefs and operators should take inspiration from this culture and market menu items that fit the theme.”

Even though autumnal touches in decor and seasonal florals in the restaurant are nice touches, full-service restaurants reflect the season the most in their menus. Of course, the most popular of fall-time tastes is pumpkin spice, but Datassential’s Kostyo thinks this trend has hit its peak. “While pumpkin spice is here to stay as a fall flavor, I think we'll continue to see it plateau as chefs look for new options, particularly on [full-service restaurant] menus,” he says. Pumpkin, however, is another story. Kostyo has taken note of more savory options including pumpkin soups, diced pumpkin on salads and bowls, pumpkin-filled pastas, and even a number of not-so-sweet pumpkin breads.

It’s an approach The Florentine in Chicago has embraced. This fall, the Italian restaurant will feature a pork shank with pumpkin polenta and sage-infused jus, as well as filet mignon served with roasted acorn squash, pomegranate, and mint relish. “What sets us apart is our ability to take a rich fall ingredient like pumpkin and use it as the star to create a contemporary take on a pumpkin-and-ricotta–filled ravioli dish,” says Zachary Walrath, chef de cuisine at The Florentine.

The cucurbits plant family, in general—of which pumpkin and squash are members—is certainly doing well, Kostyo says. According to Datassential, mentions of specific pumpkin and squash varieties, like delicata squash, have increased 254 percent on menus in the past four years and are predicted to grow another 73 percent over the next four. It’s a similar trend for root vegetables; within the same time period, carrots have enjoyed a 9 percent uptick in menu mentions, sunchokes a 19 percent increase, and kohlrabi a whopping 53 percent surge.

This fall, Whiskey Cake Kitchen & Bar with seven locations in Texas, Florida, and Oklahoma, will serve hearty veggies like these in a range of monthly soups like the Spiced Carrot Soup in September, the Cauliflower-Browned Butter Soup in October, and the Spiced Butternut Brandy Soup in November. “Based on consumer trends and fall flavors, these are ingredients that are fresh, in abundance, and that appeal to consumers,” says Holly Ratliff, vice president of marketing for Front Burner Restaurants, which owns Whiskey Cake.

At nearly 50 units, Firebirds Wood Fired Grill has created a grilled vegetable dish featuring produce like squash, red pepper, and a new veggie on the market, Caulilini—a trademarked cross between cauliflower and broccoli—in an asiago sauce for the brand’s seasonal menu, which is available from early September to late October.

Other light takes on harvest cuisine include a range of salads. Firebirds, for example, features a bourbon-brown-sugar–roasted pear salad that, like The Florentine’s fall filet mignon, leverages the bright fall fruit, pomegranate, in a balsamic vinaigrette, as well as spiced pecans, arugula, bleu cheese crumbles, and the guest’s choice of grilled salmon, tuna, or chicken. 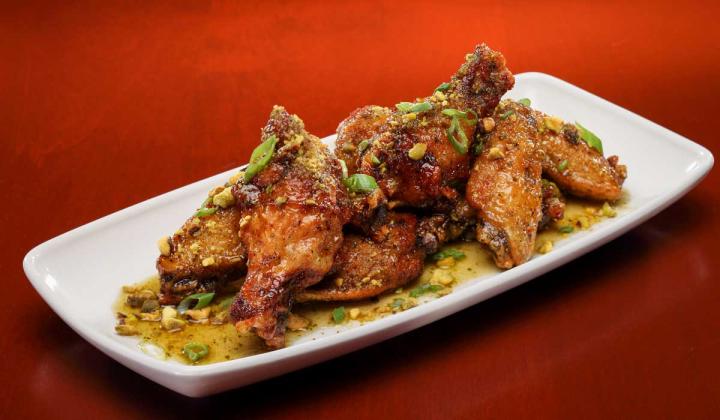 Firebirds
In the fall, Firebirds seasonalizes year-round offerings like its smoked wings, which get a revamp with a honey-jalapeño glaze, topped with crushed pistachios and grilled onions.

Despite the trend toward lighter, veg-heavy fare, however, cooler temperatures do signal the beginning of braise season. The Florentine’s menu features such fare as braised pork shoulder, while Firebirds proffers a pork chop with a bacon-bourbon mustard glaze served alongside a chile mac ‘n’ cheese.

Gary Messick, chef at Saint Michael's Alley in Palo Alto, California, likes to choose proteins that are transitional for fall features. He’ll do a honey-roasted duck breast with a szechuan peppercorn sauce or monkfish served with a lobster butter sauce. Both are heartier proteins, but not quite the heavy lamb, venison, and beef that will make more of an appearance in the winter season. “They’re a little bit more substantive, but not heavy winter dishes,” Messick says.

Lucky Rooster Kitchen + Bar located in Hilton Head Island, South Carolina, likes to keep a sense of continuity in its menu by seasonalizing year-round offerings. “For instance, our shrimp and grits is served with a corn and bean succotash with tomato vinaigrette in the summer, but in the fall we’ll make it heartier with bacon, mushrooms, greens, and creole mustard,” says chef and owner Clayton Rollison.

Firebirds does the same. In the fall, the North Carolina–based chain's smoked wings get a revamp with a honey-jalapeño glaze, topped with crushed pistachios and grilled onions.

And it wouldn’t be fall without talking about herbs. The Florentine and Lucky Rooster are big fans of hearty herbs like sage, rosemary, and thyme. “They really accentuate the flavors of fall produce. One of the great things about cooking seasonally is that the flavors are meant to go together,” Rollison says.

In general, Kostyo at Datassential expects to see more food and drink menus trending toward bitter, bold flavors, which can be achieved through herbs like these. “Look for amaros and cocktail bitters to be used in more menu items; dark sweeteners like blackstrap molasses and sorghum to be used across the menu; and the continuation of burnt flavors on menus,” he says.

In terms of toasted notes, s’mores and maple have also gained popularity. The latter has become more common not only in cocktail and dessert menus, but also on the savory side in dishes like maple-roasted vegetables.

Tea, Kostyo predicts, will also grow beyond the mug. Full-service restaurants are experimenting with tea-smoked proteins, Earl Grey–flavored desserts, and the smoked Chinese tea lapsang souchong as a flavoring ingredient.

Walrath at The Florentine cautions chefs to not get too caught up in flavor trends. “Over the years, I have learned that less is more when it comes to cooking and leveraging seasonality,” he says. It’s important to remember that seasonal ingredients at their peak don’t need much manipulation to taste delicious. “It’s all about identifying great seasonal ingredients and developing recipes that let them shine in any dish,” he adds.

And it’s important not to get too far ahead of yourself in anticipating ingredients, as well, warns Messick of Saint Michael’s. “With the weather experiencing unpredictable heat waves and rainy spells the last couple of years, things are just not as consistent,” he says. Celebrate the bounty when it’s available, but don’t count on duck dishes before they hatch.

The power of social media, especially when sharing limited-time offerings, is a huge asset for full-service restaurants.

“Everything tastes better when it comes with a backstory, and through social media we’re able to spotlight where our seasonal ingredients come from and what produce partners we work with to help create our exciting offerings,” says Zachary Walrath, chef de cuisine at Chicago-based The Florentine.

Even though Firebirds finds great success in its loyalty program and public-relations strategy, Facebook and Instagram are still huge tools for the brand when sharing seasonal items. “There are usually a few days in which a deluge of pictures are going up,” says Steven Loftis, vice president of marketing at Firebirds, regarding the start of a season.

Chef Gary Messick at Saint Michael's Alley says social media is great at promoting new, limited-time dishes, as well as seasonal ones that guests look forward to year after year. Every spring for the last 20 years, the restaurant has offered its signature chicken pot pie, and every winter, its duck confit. “We have guests who have been dining with us for 15 to 20 years. For them, it's a really nice comfort level. No matter what else is new, they can rely on a few of these things to always be there for that season,” Messick says. The sales-driven strategy builds on itself each year, as already-beloved dishes compound their popularity. 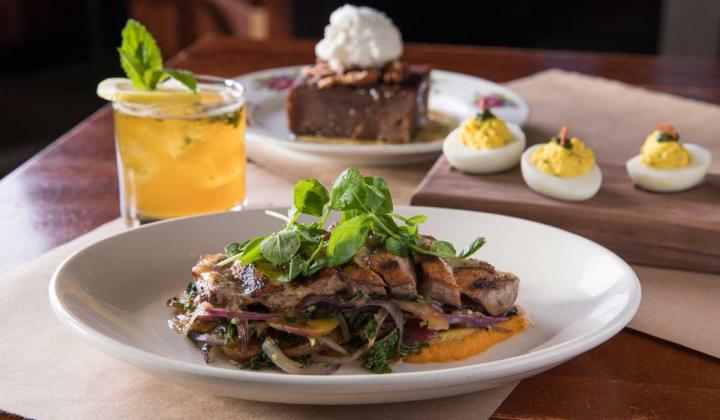 Executive chef Mike Dalton at Campiello also relies on this strategy for a highly prized ingredient. Thanks to excellent exports from the Miami area, November is truffle season at the Naples, Florida, location. Facebook, Instagram, and Twitter are where the restaurant goes to share its monthly regional menu items, as well as to let the truffle fans know when the black and white varieties are on the premises.