Are China's Mixian Noodles the Next Ramen?

While ramen has more or less become a household word—thanks not to the cheap packets that college students eat in mass quantity but to the rise of hip, Japanese-inspired noodle eateries in major cities—few are quite as familiar with mixian, a type of rice noodle popular in China’s Yunnan province. And Tong, chef-owner of Little Tong Noodle Shop in New York’s East Village, hopes to change that.

“It’s always been my obsession—I love rice noodles,” Tong says. “I love ramen and I love udon, but I grew up eating rice noodles and [have them] every time I go back to China.”

Tong was born in Chengdu, capital city of the Sichuan province. She studied in Beijing, Macau, Hong Kong, Singapore, Australia, and at the University of North Carolina in Chapel Hill before she pursued her culinary career. She graduated with highest honors from the Institute of Culinary Education in New York City and went on to work at such Michelin-starred restaurants as wd-50 and 15 East.

Then, in 2016, she embarked on a three-month journey across the Yunnan province, researching local culinary traditions and exploring the vast array of the region’s complex flavors. Less than a year later, she opened the 28-seat Little Tong.

“I think there are a lot of stories to be shared when it comes to Chinese cuisine,” she says. “It’s one of the most biodynamic areas in China, and it was the least traveled until recently.” 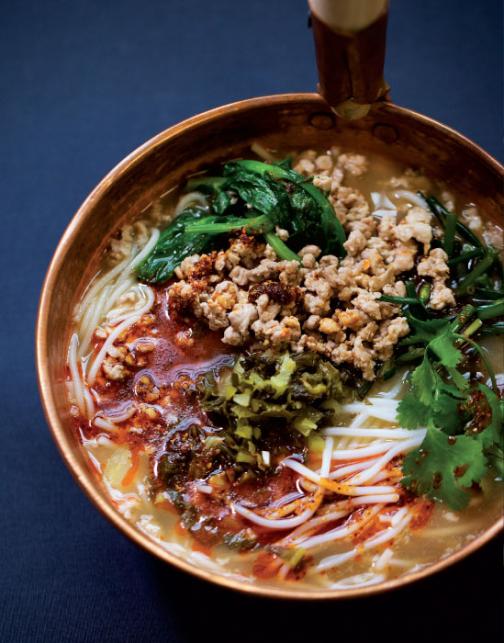 Asian noodle restaurants, whether they serve Yunnan mixian, Sichuan dan dan noodles, or Japanese ramen, have evolved into premium affairs. Here are a few noteworthy institutions across the country.

In the decade since Han Chiang first opened the go-to Philadelphia Sichuan destination, Han Dynasty has expanded to a total of nine locations—including six in the greater Philly area, two in Manhattan, and one in Brooklyn. It’s well known for its spicy dan dan noodles.

Noted Chicago restaurateur Brendan Sodikoff’s subterranean, speakeasy-like noodle eatery gives new meaning to the term “hot spot.” Its ramen bowls can be quite a heated affair. The cozy spot serves its noodles in rich and creamy, Tonkatsu-style broth derived from bones cooked for 18 hours. The menu warns of “pain, sweating, discomfort, and deep regret” for those who dare go “full spice.” Even “half spice” can be a bit much for the Scoville-sensitive. High Five calls “no spice” a “wise choice for beginners.”

The trendy spot in Oakland, California, is as much a fashionable bar as it is a place to slurp a bowl of fine Japanese noodles. Its drink menu features classic cocktails, as well as some house innovations. It’s also the only place a diner is likely to find St. George Spirits California Shochu, an American riff on the Japanese spirit produced in nearby Alameda.

There are about 27 ethnic minorities within the southwestern province—nearly half the number in all of China.

“Each one has their own culture, their own religion, [and] their own language, and they eat what they can harvest,” Tong says. “There are just so many natural resources, mushrooms, all sorts of things. The biggest source of imported mushrooms into Japan is Yunnan.”

The Little Tong menu makes such diversity of culture and flavor accessible for novices, as well as for seasoned diners. As a good entry point to the Yunnan mixian experience, servers often recommend the Little Pot, which includes minced pork belly, shiitake mushrooms, garlic chives, pickled mustard stems, pea shoots, and chili vinaigrette, combined with the noodles in pork bone broth (a vegetarian version is available). It’s cooked in a traditional copper pot and served in a smaller copper pot. “It has so many flavor dimensions, with 10 different kinds of spices and seasonings,” Tong says.

The starters also draw upon a variety of seasonal traditions. A standout is the Dali Street Taters: purple potatoes in spiced duck fat with chili oil and some dry seasonings, tucked beneath cheese curds made in the tradition of the city of Dali in southwestern Yunnan. “It’s an iconic, beautiful, ancient city,” Tong says, adding that it’s one of the very few areas in China known for making cheese.

Made from the milk of water buffalo, the cheese is not unlike mozzarella in consistency. It’s typically fried and then dried in the sun before it’s incorporated in the dish.

Despite so much focus on traditional ingredients and techniques, Tong is quick to avoid the word authentic.

“It’s Chinese food that is regional, modern, and delicious,” she says. “I’m not doing ‘authentic’—every different village has its own claim for authenticity, and there’s no way I could ever pursue that. This is a Yunnan rice–themed restaurant that has focused a lot on seasonality, on different Chinese cooking techniques, and modern techniques that I learned from elsewhere to make good food.”

Though the dishes may contrast greatly with the types of Americanized Chinese food consumers have grown up with, their lifelong exposure to their neighborhood take-out joints has primed them for this new experience.

Tong plans to build off of the Yunnan focus by incorporating influences from other regions into the menu in the near future.

And it likely will continue to stand out among the many other Asian noodle shops—ramen and the like—within a few blocks of its location at First Avenue and 11th Street in the East Village. “It’s just a different, fun vibe,” she says, “a casual happy little place where people can have rice noodles.”