2017 might just turn out to be the year of the jackfruit.

From mushroom tea to the surprising ingredient ready to explode on vegan menus, here's what we learned from this year's show.
January 2017 Annelies Zijderveld

A sea of specialty buyers and retailers converge every January in San Francisco for the Winter Fancy Food show to see what’s hot and what’s not. Joining the throng, chefs, caterers, food and beverage directors, and others working in hospitality troll the aisles to glean upcoming trends, to place orders onsite and explore flavors to incorporate into menus. Here are a few flavor trends from this year’s show and a peek into restaurant menus already including them in innovative ways.

If there’s one breakout ingredient slated for 2017 that we haven’t fully seen realized yet, it’s the jackfruit. Typically a mainstay in Southern Asian, Southeast Asian and vegan restaurants in-the-know, jackfruit flesh shreds into a vegan-friendly alternative to pulled pork and is served at Seabirds in Costa Mesa, California, as BBQ jack sliders with shredded BBQ jackfruit, slaw, caramelized onions, and dill pickles packed on slider buns. In New York, Black Flamingo serves them two ways—al pastor, marinating jackfruit in ancho chile and topping it with smoked mozzarella and seared pineapple on tortillas, and also features a menu item of “crab cakes” searing the jackfruit and adding a side of chipotle aioli, mango raita, and Savoy cabbage. Cross-town in New York, Mother of Pearl offers Jackfruit and Shiitake Mushroom Buns with ginger aioli and five spice ketchup. Jackfruit provides an adaptable vegetarian/vegan menu alternative that takes on the flavor of sauce or marinade with which it’s matched. 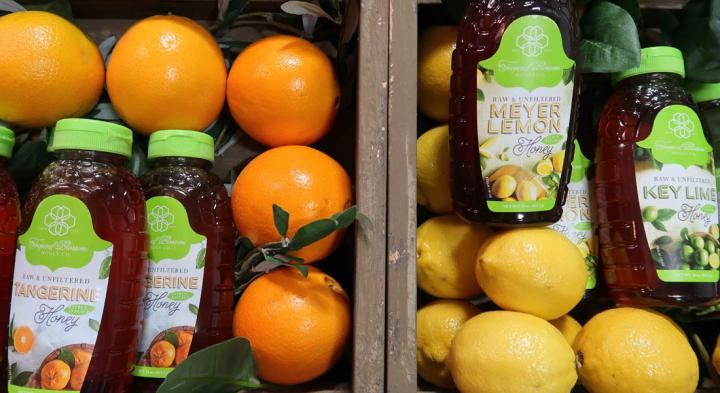 Infusing flavors into honey provides a customizable and creative option for menu offerings.

A manufacturer of hot honey served samples of chili-laced honey in one aisle of the Fancy Food show where a few aisles over, another honey company introduced a line of citrus-infused honeys, including key lime honey, Meyer lemon honey, and a tangerine honey. In Brooklyn, chili-infused honey is drizzled on a spicy pizza of soppressata, fresh mozzarella, and Parmegiano Reggiano at Paulie Gee’s. The Twisted Tail in Philadelphia drizzles rosemary-infused honey on fried chicken. At Steuben’s in Denver, an appetizer of fried corn gets a drizzle of habanero-infused honey atop, while cross-town at Honor Society Handcrafted Eatery, a gluten-free fried chicken gets slicked with sriracha-laced honey. Infusing flavors into honey provides a customizable and creative option for menu offerings. 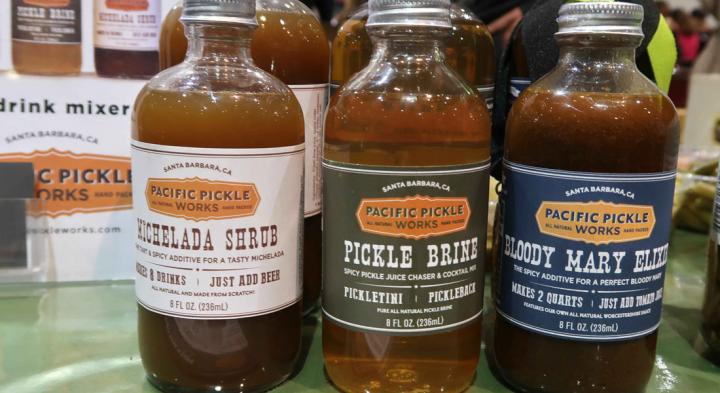 Tap into the familiar flavor of dill pickle.

The quick pickle and fermented vegetable explosion of several years ago takes a different turn as one pickle company at Fancy Food sampled condiments like mustard, ketchup, and a dairy-free sauce reminiscent of Thousand Island, utilizing their dill pickle brine as the foundation to the sauces. Dill pickle found its way as a flavor in peanuts, too. Another vendor at the show produced bottles of pickle brine sans the pickles, aimed at mixologists and the illustrious pickle back cocktails. Pickle backs started in Brooklyn so it’s not surprising to find several drinks on the Jacob’s Pickles menu in New York including Spicy Brine Margaritas with house-infused jalapeno Espolon tequila, and spicy pickle brine, as well as a drink called the Dirty Aphrodite made of vodka and dirty dill pickle brine. In another New York City borough, The Belfry boasts several options for pickle brine-based drinks including the Standard made of spicy or sour brine with house bourbon. Thinking outside the bar, Clove and Hoof Butchery and Restaurant in Oakland, California, blends minced pickles and brine into mayonnaise, served with French fries. Across the Bay, in San Francisco, AL’s Place pickle brines their French Fries, served with a smoked applesauce. Dill pickle flavor is at once familiar and offers untapped possibilities for exploration of creating fresh ideas for menu offerings. 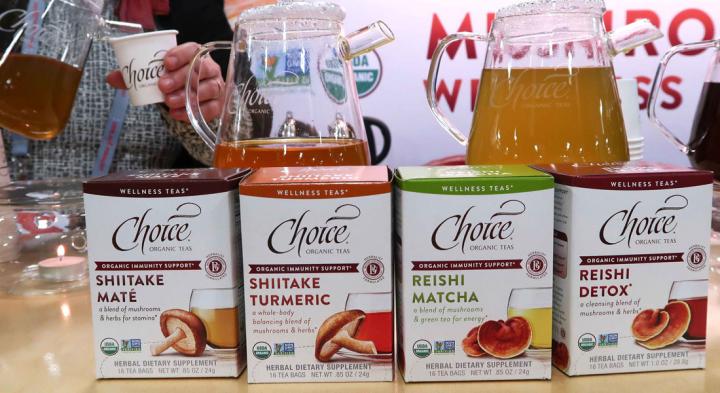 Mushroom tea? The result is a healthy, flavor-forward drink that can be combined with food or paired beside.

Reishi tea has been slowly making the rounds in the natural food industry the past two years and recently crossed over to specialty food at this year’s Fancy Food show where one tea company featured a new Mushroom Wellness line of teas that includes a reishi detox tea with notes of carob and cacao and a shiitake turmeric tea. Mushroom tea is used in the Berkeley, California, restaurant, Gather, in a shiitake bacon broth served with steamed mussels. At Jean-Georges in New York, mushroom tea comes with finely grated Parmeggiano Regiano, chili, and thyme, while in another borough, at Brodo, shiitake mushroom tea is steeped in a beef bone broth with ginger. Marigold Kitchen in Philadelphia serves mushroom tea with a wild mushroom forest and house-cured Kago Buri Hamachi. A notable Fancy Food show mention came in the form of wild mushroom chips that were unbelievably good and which could be reconfigured for restaurants with pulverized dried mushroom powder and aromatics in a potato dish. Shiitake mushroom teas provide untapped potential for adding umami to broth, where reishi mushrooms pair well and are seen in several retail products matched with cocoa. 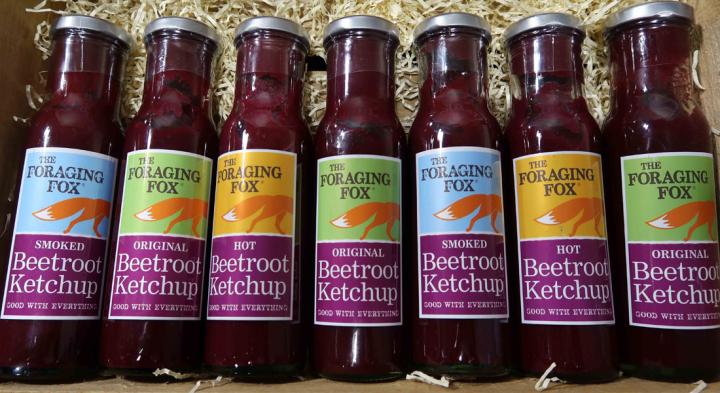 Beets are all the rage, especially in ketchup.

Several years ago, beets looked like they might plan a takeover of the space created by kale chips. And, several vendors showcased beet chips at the Fancy Food show, but where they really shone was in a ketchup, available in three flavors, including a smoky beetroot ketchup that hit all the right notes, as well as a beet-flavored kombucha. At Root Down in Denver, beets leave the plate and make an earthy sweet addition to the Beet Down cocktail, crafted of gin, Canton, Aperol, beet shrub, lemon, and mint. Rustic Canyon in Santa Monica, Caifornia, makes a Beet Royale, made of Brooklyn gin, geranium-infused beet juice, lemon, and Prosecco. In New York, at Mother of Pearl, the Jørn Utzon mixes together apple, lemon, powdered beet, passion fruit, and aquavit. Cross-town, Russ & Sons makes a drink with beet shrub. With their sweet earthy taste, beets can make the transition to non-alcoholic drinks and cocktails adding a bright pink drink to the mix of your menu. 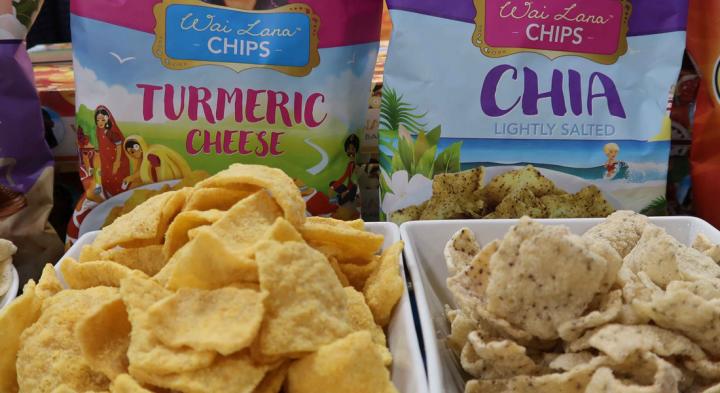 Few ingredients are as hot in health-minded circles as turmeric.

Turmeric’s takeover continues as this spice is still a hot commodity in convenience foods like tasty turmeric cheddar cassava chips. It’s found sure footing in several beverage offerings such as a ready-to-drink flavor of apple cider drinking vinegar at the Fancy Food Show and in a line of hot teas—with one serving as the base to an easy cocktail mixed with vodka and ice at happy hour on the show floor. At Woodberry Kitchen in Baltimore, the Top Hat cocktail consists of vodka, carrot juice, turmeric-chili shrub, absinthe, whey, apple bitters, and hot sauce. Meanwhile, at DOSA in San Francisco, the Flower Child cocktail shakes it up with turmeric-infused gin, spiced agave, egg whites, and lemon. A dash of this spice easily adds intrigue to cocktails with its cheering color and earthy taste, whether used in root form or ground powder. 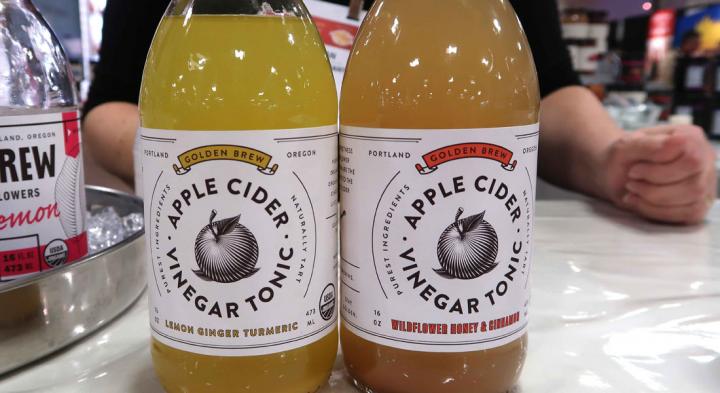 Apple cider vinegar has been a popular edible remedy for years.

A crop of new ready-to-drink bottled beverages boasting drinking vinegar and notably apple cider drinking vinegar as the starring ingredient made a splash at the Fancy Food show. Apple cider vinegar has been a popular edible remedy in natural food circles for years, but over the past few years it’s been getting greater play in mixology. Pok Pok, Portland discovered such renown for their drinking vinegars that they now sell bottles of it, labeled as Som in flavors like turmeric or celery, and also tamarind or ginger to retailers as well as mixing and selling it as bottled sodas outside of their restaurant operations (they also have been sampling their soms and sodas at Fancy Food for the past few years). One way that drinking vinegars make the rounds in restaurants is as fruit-fermented vinegars, or shrubs. Philadelphia eatery, Vedge, features pineapple-chile shrub with tequila, and aperol in the Tulum or Not cocktail. Cross-town in Philadelphia, at Abe Fisher, they stir together a cucumber-dill shrub with sparkling water to pair with their Jewish diaspora style cuisine. Woodberry Kitchen in Baltimore mixes a mocktail of apple-sage shrub with soda. DOSA in San Francisco’s Icon cocktail mixes together apple-ginger shrub, bourbon, elderflower liqueur, spiced agave, and lemon. Russ & Sons in New York serves a cherry shrub, created with cherries, white balsamic vinegar, Szechuan pepper, and lime. Shrubs can be made easily in-house using fruit that’s just past its peak and offer opportunities for drink menu expansion. This simple concoction can swing toward cocktails or boost a restaurant’s non-alcoholic offerings.

A notable selection that didn’t make it into the mix above includes black garlic, which one food purveyor blends into a hummus flavor that debuted at the Fancy Food show. Vedge includes it in their side dish of campfire potatoes with za’atar. Another trend to watch is bold flavored spiced salts like salty and spicy sriracha roasted hemp seeds, a crunchy and addictive topping or snack that premiered at the Fancy Food show, along with another purveyor who launched a line of peanuts in interesting flavors (with no powder residue clinging to fingers using a proprietary cooking method that includes high heat), available in flavors like bay spice, buffalo, and taco. Woodberry Kitchen in Baltimore offers this idea in an appetizer of fish pepper salt sprinkled over popcorn. Whereas, Rustic Canyon in Santa Monica includes an appetizer of lavender almonds and AL’s Place in San Francisco serves up vadouvan almonds. Using flavored salts gives an upselling opportunity especially in bar snacks like nuts and popcorn.