In addition to its Salted Caramel Chicken & Waffles, HopCat excels in brunch staples like avocado toast topped with eggs and Egg in the hole sandwiches.

Thanks to creative iterations, chicken and waffles and other brunch classics remain crowd pleasers.

Since the first outpost debuted in 2008, beer-centric chain HopCat has expanded rapidly. Across the Midwest, guests love the huge tap selection and the pub-focused menu. Dinner includes fun dishes like house-made pizza rolls and the famous “Cosmik fries” topped with an addictive cracked black pepper seasoning. The brunch menu is similarly playful, including plenty of brunch staples like scrambles and French toast. (They even use the signature Cosmik seasoning on the rim of their bloody marys.) HopCat’s chicken and waffles are a guest—and Instagram—favorite.

“Chicken and waffles are the ultimate breakfast comfort food, and we wanted to put our own HopCat spin on the traditional dish,” says Shawn Blonk, Hopcat’s director of food and beverage. The restaurant takes a sweet-sugar waffle and piles it high with fried chicken, topped with salted-caramel butter and hickory smoked bacon. “In addition to the salted-caramel butter, which enhances the sweet and salty combination, guests have the option to order the chicken Nashville hot. This spices up a dish that you might find on other menus and makes it unique to HopCat,” Blonk adds. 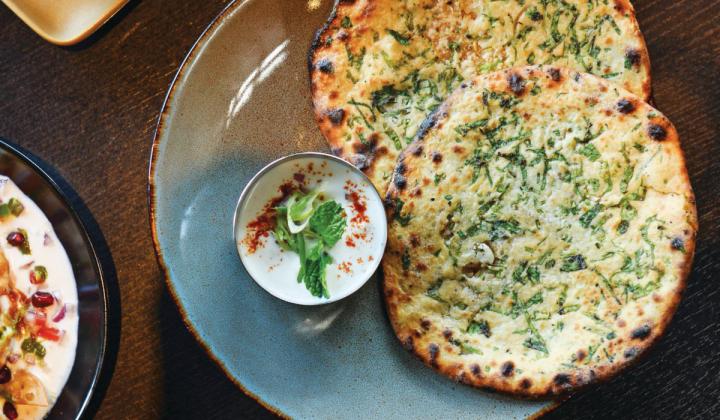 Restaurateur Ajay Walia has never done things the traditional way. He worked in Silicon Valley before opening his first restaurant, Saffron Indian Bistro in San Carlos, California, and his approach to brunch is equally unconventional.

“At Saffron, we didn’t fully adapt to the American idea of brunch, but instead brunch presented us with an opportunity to showcase our cuisine in a new light,” Walia says. “We are able to expose customers to Indian ideas of breakfast and lunch by adding traditional items menu like eggs, [but] prepared the Indian way.”

One of the brunch dishes Saffron has taken on is chicken and waffles. The fried chicken is spiced with cumin, fenugreek leaves, cilantro powder, and chilli powder. Other menu items, like the Gali Aloo Paratha, introduce a typical Northern Indian breakfast food to American guests.

“At the beginning guests’ reactions to our brunch were a bit surprised, because everyone is so used to Indian buffets,” Walia says. “Now, customers have caught on and the feedback is great and very positive.” 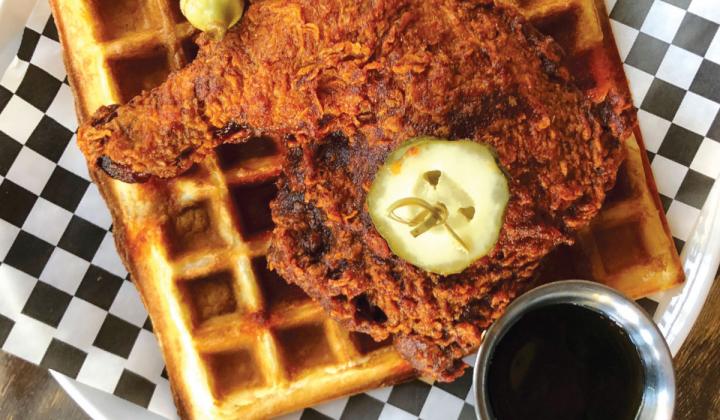 At Dusek’s, chicken and waffles gets a nashville hot twist with cayenne pepper and house-made pickles.

It’s not often that you get to eat a Michelin-starred brunch, but at Dusek’s Board & Beer, the morning meal is just as stellar as supper. Even better, guests can wash it all down with one of four different “beermosas,” all made with craft brews from an extensive list and intended to pair perfectly with the eclectic menu.

Dusek’s pastries are fantastic—think: ricotta beignets and butterscotch sticky buns—but the hot chicken and waffles is what steals the show. The Nashville classic usually consists of fried chicken spiced with cayenne pepper atop a slice of bread and garnished with pickle chips.

“Our white bread waffle was developed by our pastry chef, T.C. Lumbar, and it really soaks up all that spiciness that seeps off the chicken when you cut into it,” says executive chef Mike Galen. “For a palate cleanser we have two types of pickles: our beer-vinegar dill pickles and pickled okra.” The waffles are also topped with Tabasco maple syrup.

“I think this is a fun and creative way to do chicken and waffles,” Galen adds. “It’s not too complicated, and the guests who are ordering it agree.”