The National Restaurant Association’s 2022 State of the Restaurant Industry found that more than four in 10 full-service restaurant operators expect loyalty or frequent-customer programs to become more widespread this year.

Why the Future of Restaurants is Loyalty

As technological advances simplify rewards programs, restaurants can tailor offerings to the guest and learn more about them through data insights.

As COVID-19 creeps toward endemic status and inflation continues to roar, full-service restaurants increasingly have been moving to launch or expand loyalty programs to make sure their best customers keep coming back—during good times and bad.

These programs, often viewed as initiatives to bond customers more closely to a restaurant while providing a sense of value, have been around for years in one form or another. In recent years, however, they’ve taken on a more important role as the coronavirus ravaged the dining industry.

Loyalty plans do more than increase business and build goodwill between a restaurant and its consumers. Data garnered from these programs can provide operators with actionable insight into how guests view these restaurants while also allowing brands to tailor their customer communications.

Dozens of full-service restaurants—ranging from national brands such as Red Robin, Logan’s Roadhouse, and IHOP to regional players like Iron Hill Brewery in the Mid-Atlantic and Rib & Chop House in the Mountain West—have recently introduced or upgraded loyalty plans. And more are likely to follow.

The National Restaurant Association’s 2022 State of the Restaurant Industry found that more than four in 10 full-service restaurant operators expect loyalty or frequent-customer programs to become more widespread this year. The latest activity follows on the heels of a “flurry of investment” into loyalty programs launched by operators in the months before and during the pandemic, according to a Paytronix Loyalty Report released last fall.

These programs provided “tremendous value” to restaurants in 2020 and “helped them stay afloat or even grow,” says Andrea Mulligan, chief customer officer at Paytronix, which provides software solutions. “These are still relevant, if not more so.” 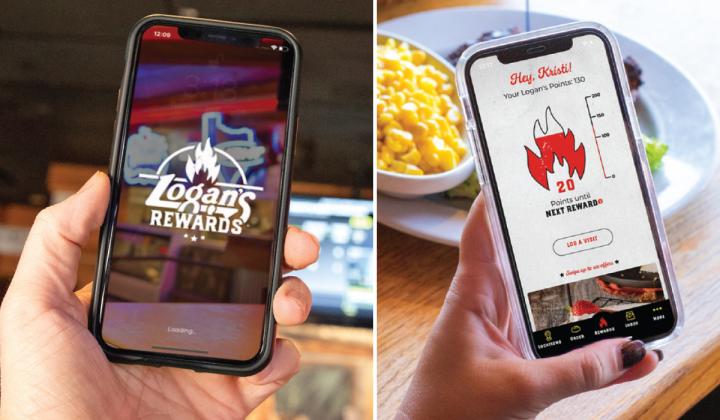 Logan’s Roadhouse rewards launched last fall and distinguishes itself through a mobile-forward approach.

That certainly was the case for Iron Hill Brewery, which upgraded its rewards program by tying it to its proprietary app just before COVID hit. The ties built by the loyalty program “really helped carry us through the pandemic,” says Chris Westcott, chief executive of the Wilmington, Delaware–based company. “The loyalty goes both ways.”

That two-way street is critical in developing a loyalty program, says Lisa Lee, vice president of marketing at Houston-based SPB Hospitality, whose Logan’s Roadhouse brand began its rewards initiative last fall as part of its return to solvency.

“First and foremost, it’s about creating an enhanced guest experience,” she says. “The second thing is that we are able to learn a lot about the guests and what motivates them.” The result is that everyone—operators, their staff, and customers—benefits.

As restaurants boosted or improved their loyalty programs over the past few years, diners increasingly have embraced them. The portion of customers using at least one restaurant loyalty program jumped to 47.4 percent from 43 percent in a seven-month period that ended last April, noted Paytronix in a 2021 consumer survey conducted with payment-industry research firm PYMNTS.

About 80 percent of adults—even more of Gen Z and millennials diners—said they likely would join a rewards program if it was offered by their favorite local restaurant.

Most of the gains in loyalty-program use among those surveyed was for quick-service chains, although table-service chains bested limited service in terms of frequency of use. Nearly half of the full-service customers utilized at least one restaurant’s loyalty program. Rewards program usage dropped, however, among independent table-service restaurant guests.

Overall, the survey found a lack of awareness or access to rewards plans is more common among full-service customers, with a majority stating the primary reason they didn’t use the programs was because those restaurants didn’t offer the option. At the same time, 57 percent said they would spend more on food at a restaurant if it had a loyalty program.

While the consumer survey gauged guest sentiment, the Paytronix loyalty report analyzed actual credit card data for dozens of restaurant brands and millions of customers. It found that over time, most loyalty programs boost members’ visits and the amount they spend by 18–30 percent. Even in 2020, loyalty members’ checks were 6 percent larger than those of non-rewards members, the report found. The depressed number that year owed to the fact that many full-service restaurants were busy adjusting to pandemic restrictions. Plus, alcohol sales were restricted in many states.

But it’s not just the increase in visits and spending that make loyalty programs valuable. Mulligan points out that data from these programs can be leveraged for tactical business and marketing decisions, with artificial intelligence sussing out hidden patterns and trends that impact relations with all guests, not just rewards members.

In short, operators can get to know not only who their customers are, what locations they frequent, and when they visit, but also what their favorite menu items are, what motivates them, etc. While loyalty programs can vary significantly, Paytronix has broken them into five distinct categorie.

The most popular approach is the automatic conversion model, wherein rewards are earned after points (earned with each dollar) hit a certain amount. However, the bankable version is close behind, thanks to its flexible structure, which allows consumers to choose not only when they redeem their points but also what rewards they receive.

“It’s the one I’m seeing the most,” Mulligan says of recently launched plans.

Some chains use a combination of schemes, but they all help operators gather megabytes of data about their customers. Increasingly sophisticated mobile apps make it easy for guests to tap into the loyalty programs—and for businesses to tailor interactions with those guests.

“The previous program had seen a great deal of success,” says Darla Morse, chief information officer of the suburban Denver-based chain. The new one, however, “allows us to take the program to the next level” by better understanding the behaviors and patterns of guests and allowing diners to link the app to their Facebook or Apple accounts, she adds.

Red Robin’s program is basically a qualified-visits plan. The key rewards are that every 10th item is free and members get a free burger during their birthday month. There is also a bit of the surprise aspect to the program, thanks to exclusive rewards and special offers.

“The program was developed with the ‘buy nine, get the 10th one free’ and the birthday burger. As we talked to guests, they said they loved that,” Morse points out. “We’ve kept that and can drive [the relationship] higher with the surprise-and-delight messaging.”

One big difference is that the new digital experience removed some of the technological limitations of the old plan, says Jonathan Muhtar, chief concept officer at Red Robin. “The base design for consumers is the same, but the relevancy is improved.”

As a result, the company’s surprise opportunities can be customized to the guest. For example, a key demographic for Red Robin is families with kids, so knowing which loyalty members order kids’ meals gives the chain an opportunity to target them with, say, a 30 percent-off offer.

“The feedback we’ve received so far has been positive from guests and operators,” Lee says. It also turns out that plan participants to date tend to have a higher check average.

Rewards members can do everything from placing an order to paying for it from their mobile devices, all while building points they can cash in for rewards. While points-based loyalty programs had already existed for some of SPB Hospitality’s other brands, including Old Chicago, the Logan’s plan is unique in its mobile-first design.

In this bankable points program, in which a point is earned for each dollar spent, members can redeem them for $5 off a minimum $20 purchase when they reach 100 points, a free appetizer for 150 points, or a free entrée for 200 points. They also get a free dessert for their birthday,

While it’s a plus for the company to get more frequent and higher-spending visits by rewards members, the program also benefits Logan’s.

“It allows us to get a richer perspective of the guest and a view into what they are purchasing and how they are motivated,” Lee says. Plus, there is the opportunity to directly communicate with them more personally and on a more fequent basis.

Putting a premium on loyalty

Iron Hill also employs a points system with its King of the Hill rewards program, but there is one big difference from other loyalty plans: The company requires consumers to pay a $20 initiation fee to join the program, which operates almost like a club.

Even with the buy-in, King of the Hill has garnered more than 100,000 members across the chain’s 20 locations in five states. “We’re proud of this membership level,” Westcott says.

Other benefits include a member-exclusive 22-ounce mug of beer for the cost of a pint, free appetizer or dessert on their King of the Hill anniversary, invitations to events like appreciation nights that feature half-price growlers, and updates on various events.

For its part, the loyalty program upgrade has translated to better insights. Still, some of the most impactful information has been suggestions and feedback Iron Hill has received when it solicits its members’ thoughts.

“We’re getting better data now,” Westcott says. “It just opened the doors to communication in a more significant fashion.”

Going forward, the CEO expects the program to evolve, and one idea being launched later this month is the chain’s beer club subscription program, which was offered first to King of the Hill members. The club will package four 16-ounce beers brewed exclusively for the club quarterly.

“I think everybody is trying to figure out a way to keep that customer,” he says. A loyalty program “creates a cyclical behavior, and it allows you to really connect with them.”

Automatic conversion: Points are earned by members for each dollar spent, and when a specific threshold is met, the points are converted into a reward.

Bankable point: Members build points based on the amount they spend, redeeming them for available rewards when they want. The points are earned, tracked, and stored in a personal account.

Qualified visits: Visits add up for each time a member dines at a brand unit. At a certain threshold, the points automatically convert into a reward, reward dollars, or a discount.

Surprise and delight: In this less common program, loyalty members earn rewards and perks unexpectedly rather than accumulating points over time.

Layered/Other: These could be a tiered program, where more spending earns richer rewards, or perhaps a subscription plan, in which guests have access to pay for special food and/or beverage offerings.