San Pedro Fish Market has been a Los Angeles staple since the 1950s.

Thanks to a docuseries and one of the most instagrammable menus in the nation, San Pedro Fish Market is ruling the seafood scene.
November 2017 Danny Klein

Mike Ungaro isn’t being flippant when he says his restaurant has a real traffic problem. Freeway ramps are literally chocked up. People are driving six hours to visit on a Wednesday morning, and then turning back. During one weeklong period in March, his restaurant welcomed some 30,000 people.

“We’re having issues with crowd control. It’s really creating a problem for the city,” he says, “which is a great problem to have, don’t get me wrong.”

How Ungaro and the San Pedro Fish Market got there is a blueprint buster for the average restaurateur, a fact that’s fitting when you consider the family behind the story, a group about as off-script as they come.

Mackey Ungaro, his son Henry, and nephew Tommy Amalfitano, debuted Vista Seafood as a small corner store in 1956. In the late 1960s it moved to its current location, was renamed, and has stayed in the family ever since, morphing into a 3,000-seat, 50,000-square-foot powerhouse.

The restaurant hummed along for decades until the recession arrived. In 2007, Ungaro says San Pedro Fish Market saw its first dip in sales since the 1980s. And that’s when things officially got interesting.

At first, the team turned to social media and saw its sales jump about 12 percent annually. But let’s fast forward to July 4th weekend 2016. July, which is typically the restaurant’s busy month, witnessed a sales jump of 20 percent over the previous year.

“There was no accounting for it. There was nothing else we were doing,” Ungaro says.

That “nothing else” refers to the restaurant’s “Kings of Fi$h” docuseries, a reality show that chronicles the restaurant’s day-to-day operations. It generated more than 40 million views through the first two seasons. 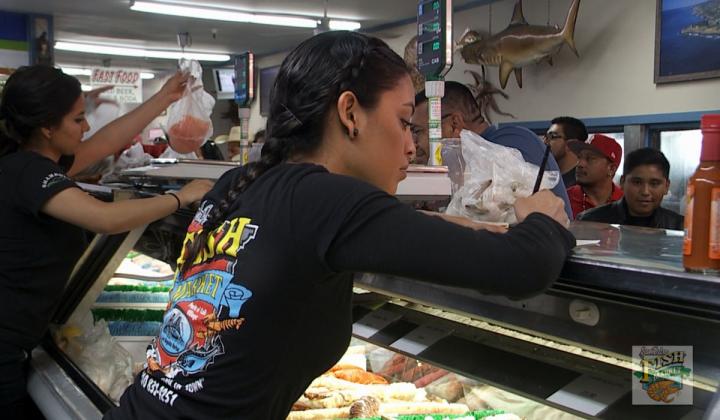 San Pedro Fish Market flirted with fame before, but nothing like this. The restaurant was featured on The Food Network’s Hungry Detective more than a decade ago. The episode aired in December. It was freezing cold and nobody came out in response.

Then the restaurant appeared on Google’s channel. Again, the results weren’t anything substantial. But this time the producers let Ungaro keep the sizzle reel. San Pedro Fish Market used the two-minute promotion to help sell its products in grocery stores. A light bulb went off.

“It looked so much like a TV show they wanted to get onboard before it became one. But it would always fail because we didn’t have anything back it up,” Ungaro says.

After another TV stint, this time on Travel Channel’s Food Paradise, Ungaro realized it was time to make their own show, stop waiting, and just run with it. Originally, it was supposed to be a how-to series. It evolved into a goofy, entertainment piece that has turned the restaurant’s characters into celebrities. Ungaro, known as Mr. Computer on the show, says it has played a massive role on the restaurant’s bottom line.

“I would say for every dollar we put into this it’s produced at least $5 in new sales for the restaurant,” he says.

That July, when the sales boom came, they had aired four episodes. FOODBEAST then reached out and asked if they could distribute the series.

“We weren’t looking to do a TV network. We wanted to maintain control. We worked it out with them,” Ungaro says. “We said we’ll give you all the content, but you need to help us produce viewers because that helps us produce sponsors. That’s really our move now, looking for help in finance and production.” 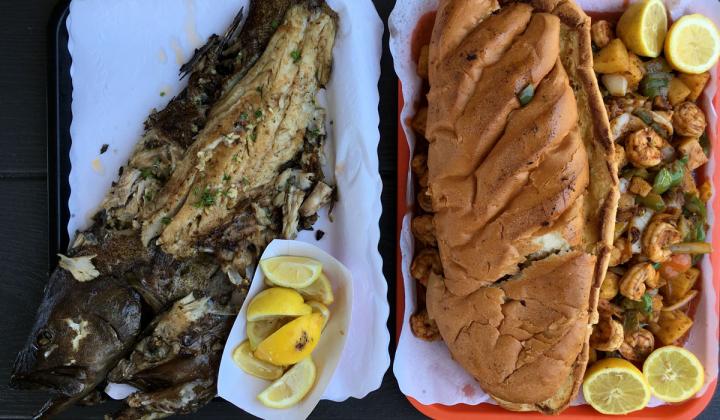 It would be nearly impossible to count the amount of fish sold per year at San Pedro Fish Market.

After launching the show, FOODBEAST swung by the restaurant and filmed what’s known as the “Super Tray.” It’s a customizable plate stacked with seafood, potatoes, and veggies. The video turned in more than 30 million views online and led to an actual shut down of freeway off-ramps into the Port of Long Beach. This also resulted in the 30,000-customer invasion Ungaro was referencing before. San Pedro was ranked No. 7 on Food & Wine’s January list of the 10 Most Instagrammed Restaurants in America as well. The account has more than 22,000 followers.

While Ungaro says he’s tried to stay in the background mostly, he experienced a surreal day recently during a business dinner at a Brazilian steakhouse. A girl approached him and asked if he was Mike from the show.

“I looked over her shoulder, her whole family was staring and looking to see if it was me or not. It was the most freaky experience I’ve ever had,” he says.

Tommy Jr. has signed shirts. They’ve all taken pictures with guests. Overall, it’s made the operators not just recognizable to guests, but accessible, turning San Pedro Fish Market into a destination of unique description.

It’s also home to four Guinness World Records. One is the most seafood prepared at an outdoor event (12,537.4 pounds), done so on September 19, 2009 for the Port of Los Angeles Lobster Festival.

Naturally, the restaurant has had to evolve to meet its consumer demand. In 1982, the owners decided to reopen the restaurant as a full-service operation with a walk-up counter added in. They expanded the lobster and crab tanks, adder steamers, and grew the footprint.

Ungaro was 12 when it opened with 3,000 seats on Good Friday in 1981. These days, the restaurant is selling about 12,000 loaves of bread a week, a couple of thousand pounds of red potatoes, and a pretty much incalculable amount of fish.

And the attention is leading to more growth. They also operate the adjacent Crusty Crab and are getting ready to bring a fast casual, San Pedro Fish Market Grille, to the LA dining scene. A Palos Verdes Peninsula Center location is set to open in March, with a Harbor City unit slated for May.

“We started looking at and we had been talking about it for a while. Maybe we needed to find a way to give people another option outside of here,” Ungaro says.

As San Pedro Fish Market grows, the reality show will serve as a promotional vehicle, and offer a rare peek behind the curtain of a thriving restaurant operation.

“People will get to see the whole process. What are the challenges? It will be entertaining but it will also show customers that there’s a new opportunity to experience our restaurant,” Ungaro says. “We’re excited to show them what’s coming next.”