Throughout the next year, Buffalo Wings & Rings will be introducing different flavors, which are more adventurous and reflect global flavors, to the menu.

An unconventional test revealed insights into what the 57-unit brand is doing right—and how it can disrupt the sports bar status quo.

Just like any restaurant brand, Buffalo Wings & Rings thrives on feedback and data. The company loves hearing from guests and involving them in the decisions that affect the brand. Whether that comes in the form of feedback about a dining experience or whether or not they like a new sauce, the company welcomes the insight.

One major finding from talking with customers is they still confuse Buffalo Wings & Rings with another nationwide wing chain, vice president of marketing Diane Matheson says. That perception, paired with the fact that the brand isn’t an independent restaurant, puts it at a disadvantage sometimes.

“We know there are some perceptions just based on some consumer learnings that a chain restaurant doesn't necessarily offer the same quality of ingredients and flavor as local independents,” she says. “I think we're just trying to turn that perception on its head and show people that we really can offer a great tasting food that they would expect at a local independent.”

At the recent Queen of the Wing festival, the company decided to test some new sauces and disrupt consumer perception in its home market of Cincinnati.

Throughout the research and development process, Buffalo Wings & Rings’ products are tested and tried at least three times with guests, either through a focus group or in-restaurant event. For the latest event, the company decided to take another approach.

The company entered the festival under two names: Buffalo Wings & Rings and NBL CKN. The name of imaginary brand comes from Wings & Rings’ motto “Great Food, No Bull.” Matheson and the marketing played up the “No Bull” part to make the name sound like the word “noble” to form NBL CKN. The festival offered the team a chance to test which booth would gain more attention from consumers.

“We knew we had those two challenges against us going into the festival,” Matheson says. “There's a lot of local independents that entered this and then people confusing us with [Buffalo Wild Wings] and not wanting to give us a try.”

With two booths at the event, the team observed first-hand how consumers approached the brand operating under two different names. The NBL CHK booth had its own logo, staff, website, and uniform.

To ensure a fair test, the team decided to keep the true identity of NBL CHK secret until the end of the event. “We went in and told no one,” Matheson says. Buffalo Wings & Rings was a sponsor for the festival and the team didn’t want people thinking the deck was stacked in their favor just because they had two brands in the competition.

“As soon as the festival started NBL CHK was packed with people and we remained that way throughout the day,” Matheson says. “We actually sold out of wings.” 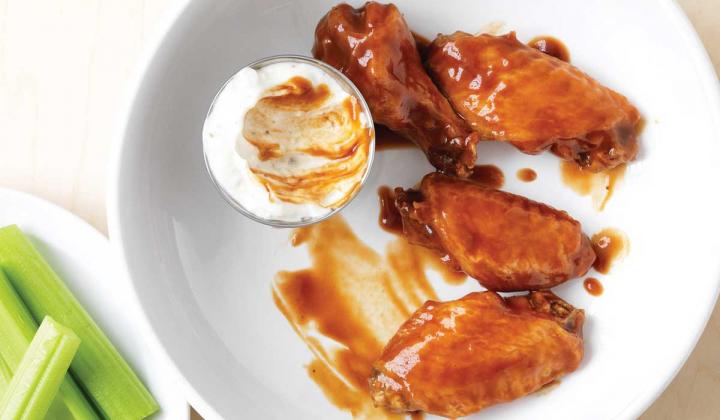 At the recent Queen of the Wing festival, the company decided to test some new sauces and disrupt consumer perception of the brand in its home market of Cincinnati.

The Wings & Rings booth had a steady line throughout the day, but it wasn’t close with the attention NBL CHK received. It was stunning, Matheson says, considering everything—the chicken, the cooking process—was the same except for the sauces. The sauces at Wings & Rings also gained little attention in the vote for fan favorite. Meanwhile the sauces at NBL CHK remained on the leaderboard all day.

“We were watching it go back and forth, back and forth, and weren’t quite sure what was going to happen,” Matheson says. “And then at the very end, we had pulled it out.”

Wings & Rings didn’t hide NBL CHK’s true identity for long. After winning, the company revealed it was behind the two wing brands. Festival-goers were surprised and had mostly positive reactions, Matheson says. Throughout the day, the NBL CHK team handed out cards with a QR code, which guests could scan at the end of the event. The scan led consumers to the NBL CHK website, which was then redirected to the Wings & Rings page.

The festival offered the brand more feedback and insight than it normally gathers at one of its normal tests. It was a fun study in consumer psychology, Matheson says.

“It actually was a really great event for us,” she says. “Our hypothesis going in kind of played itself out that, you know, a name can mean everything and it comes with a certain perception. It was a good lesson learned.”

The demand for the winning sauce at the Cincinnati Wings & Rings location was so high, the brand is fast-tracking it to launch by the end of October. It will be rolling out to restaurants nationwide over the next few months.

Matheson says the brand plans to keep the NBL CHK brand in its back pocket. The marketing team is playing around with ways to leverage it in the future.

The new options featured at the festival reflect the changing flavor profile of the Wings & Rings menu.

Just like other cuisines, wings are evolving. Gone are the days where the menu will only feature classic flavors, Matheson says. The brand is introducing different creations, which are more adventurous and reflect global flavors.

“We’re always in this kind of wing innovation mode where we're looking at new ways to cook the chicken, new ways to hand-bread, new ways to bring in flavors, you name it,” Matheson says.

Chef Dan Admire, who has a fine-dining background, is leading menu development at Wings & Rings.

“We're not trying to be what we're not, but we are trying to within our category and what people are looking for,” Matheson says. “We're trying to break the paradigm that you can't get great food at a sports bar and restaurant.”

The tried-and-true flavors will remain on the menu, but new flavors will be introduced with more frequency, Matheson adds. Some of the new sauces will be quick, limited-time offers, while others will join the menu permanently.

The goal is to attract millennials and Gen Zers with a familiar product, but then push the boundaries when it comes to flavor, Matheson says. 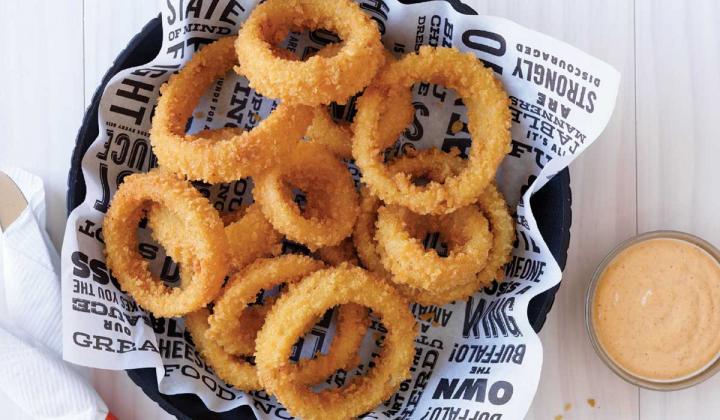 Matheson says the brand plans to keep the NBL CHK brand in its back pocket. The marketing team is playing around with ways to leverage it in the future.

“We'll use the wing as the crossover vehicle that they're familiar with,” Matheson says. “And then we're going to play around with different flavor pairings.”

Flavors of the Middle East and Asia will join the existing lineup of buffalo and barbecue sauces.

Heat will also factor into the development of new sauces. Instead of just relying on cayenne peppers, the culinary team is looking to incorporate a number of different peppers—everything from Carolina Reapers to ghost and habanero peppers—into new sauces.

“We want to make sure that our guests feel like we're delivering on the sauce side of the wing,” Matheson says.