Front Burner Restaurants CEO Randy Dewitt believes food halls could be the most exciting concept the industry has seen.

A spirit of creativity and constant innovation keeps the CEO of Front Burner Restaurants thinking ahead.
June 2017 Danny Klein

Randy Dewitt can only imagine what this would have felt like 20 years ago. Like many aspiring restaurateurs, his pockets were full of passion and little else.

“I just think it’s the coolest foodservice concept to come along in my entire career,” Dewitt says. He’s surveying Legacy Hall, a nearly 60,000-square foot development in Dallas-Fort Worth’s renowned Legacy West Development. Complete with on-site brewery, beer garden, artisan food stalls, a full-service restaurant, and an outdoor live entertainment venue, the upcoming culinary compound is a fitting entry into the space for Dewitt, the CEO of Front Burner Restaurants. Throughout his career, one perhaps best known for founding Twin Peaks, Dewitt has tried to follow a failsafe strategy: Develop the DNA and soul of a concept and then simply outexecute everybody else.

Dewitt says he believes food halls are going to dot markets from coast to coast in the coming years and he wants to have “a handful of the very best.” Dewitt’s affinity for the model stems from his own resume.

When he first started in the industry, Dewitt lacked resources and capital, naturally, and was struggling to find even the faintest crack in the door. But if a food hall had existed at the time, he could have taken his idea, without outside investors, and brought it seamlessly to life. “It would have been a great place to start,” he says. “Much less risk.”

There’s more to the notion, he adds. At least in the case of Legacy Hall, Front Burner will assist incoming operators by allowing the entrepreneurs to lean on their 23 years of experience building and growing restaurants. Front Burner’s in-house design and construction development chops, along with the organization’s brass, including Dewitt, will be at the ready to make sure chefs and food visionaries succeed. That equation, he says, is in the best interest of everybody, including the consumers, of which more than 1,500 could fill Legacy Hall at any given time. 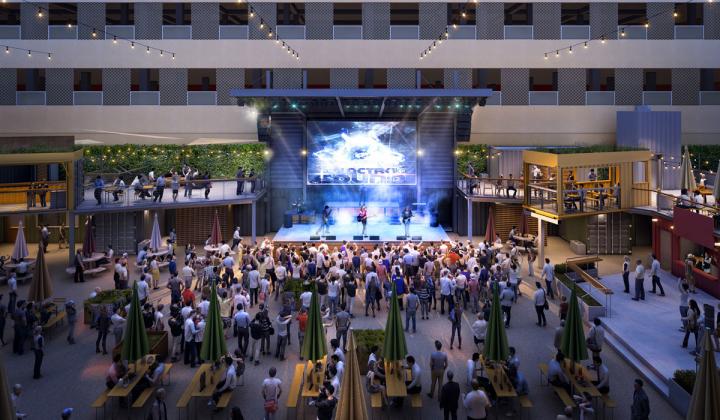 Legacy Hall is going to have a bit of everything, including a live entertainment venue.

“It’s so pure because it’s not one company trying to present everything. It’s individual ownership and usually the owner/operator is standing right behind the grill making whatever you’re getting. It’s really exciting,” Dewitt says.

This spirit of innovation is driving Dewitt. In 2016, when Twin Peaks sold a majority interest to La Cima Restaurants LLC, Dewitt stepped away from the day-to-day and turned his focus to Front Burner’s emerging footprint. Joe Hummel assumed the CEO role at Twin Peaks and Dewitt remained on the board of directors.

Front Burner is a restaurant innovation lab in many ways. It’s the force behind more than 90 locations and multiple thriving brands that identify as polished casual concepts, restaurants presenting more like independent operations than cogs in a larger conglomerate. Whiskey Cake, Mexican Sugar, Velvet Taco, Ida Claire, The Ranch at Las Colinas, and wine-on-tap concept Sixty Vines are some of the brands in Front Burner’s portfolio.

The experience with Twin Peaks, however, which was founded in 2005 and grew to 78 locations when the La Cima announcement was made, is always a source to pull from for Dewitt. “We’re always trying to go where the puck is going as the expression goes in hockey. We want to build restaurant concepts that are for the next 20—30 years,” Dewitt says. 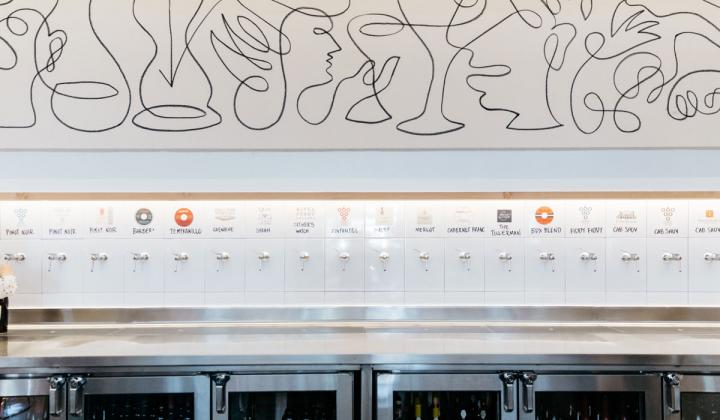 Front Burner concept Sixty Vines is thriving with a wine-on-tap model perfectly suited for customers of all ages and price points.

Velvet Taco is one such concept. The brand received a significant investment from L Catterton in 2016 and is poised for rapid growth.

Dewitt has pretty much seen it all at this point of his career. He started with Half Shell’s Oyster Bar & Grill in University Park, Texas, in 1994. Dewitt went on to build Rockfish, a brand that caught the eye of Brinker International. With the backing of the publicly traded giant, the concept grew too quickly and swerved off course. Dewitt ended up buying the company back and contracting it before selling it again.

Dewitt partnered with Scott Gordon to create Twin Peaks in 2005, and it took off quickly, experiencing over 50 percent year-over-year growth from 2012—2015.

These days, Dewitt and Front Burner are in a place where developing restaurants feels like trying on a tailored suit. The company doesn’t need to expand as much as it strives to create something lasting and memorable.

“Being cutting edge is exciting. We don’t just create concepts because we can,” he says. Dewitt uses upcoming seafood concept The Keeper as an example. “We have direct sourcing from fishermen in Alaska and the Pacific Rim, just from travels and friendships and some relatives that will allow us to source fresher and better seafood than we think anybody else in the Dallas-Fort Worth area. That’s why we’re bringing that brand to life. Otherwise we probably wouldn’t have done it. We would never say, ‘Let’s just do a seafood concept in the same every other seafood restaurant in the area does.’ That’s not who we are.”

Dewitt sold Rockfish for a second time nearly 10 years ago, a summer decision that involved cutting bait with casual dining in a sense. In Dewitt’s view, the segment is oversaturated and rigid. There are too many seats and too many options.

“The real opportunity is how to reuse some of that real estate because casual dining is closing more restaurants than they’re opening right now,” he says.

Polished casual, on the other hand, is a different story. Why? “It’s driven by food quality and the fact that most polished casual restaurants are more locally owned and owner operated,” he says. “They’re not chains. They might be small, regional operations that have a dozen or fewer restaurants. That’s just more appealing to consumers.” 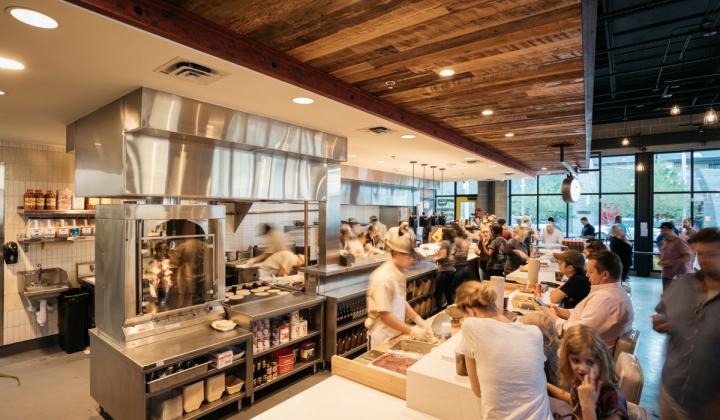 And from a sourcing equation, smaller chains, Dewitt says, are far more nimble when it comes to delivering the farm-to-table promise so many consumers yearn for.

“To cede that level of control, to the restaurant level, about what’s on their menus is really difficult for those larger chains,” he says. “… Especially the publicly traded ones because food cost margins, things like that, are controlling a lot of their decisions.”

Another point Dewitt makes is that Front Burner has the ability, as a multi-concept company, to fit its restaurants to the real estate—not the other way around. Recently on a tour in Houston, advisers showed Dewitt a space they felt could work for Sixty Vines. While it would likely succeed there, Dewitt recognized the venue as a much snugger fit for a future concept set to debut this fall.

“We can just call an audible and say we’re going to do this. I think that’s a strong advantage to keep the company growing,” he says.

Creativity and innovation bring Dewitt back to Legacy Hall. Regardless of which space he explores, the foodservice industry is more diverse and lively than it’s ever been.

“Just look at the trend of consumers being so excited about food,” he says. “It’s amazing who I meet and they say they watch [food shows on TV]. They just run out of other ideas or there are no more football or basketball games to watch so they turn on food. And they’re not even a foodie but they become one by consuming that content. If you think about that, it’s a pretty exciting prospect for the industry and for the future of this business. We’re excited to be a leading part of it.”