Commander’s Palace reopened only to close again three days later thanks to a hurricane. It's open once more.

The New Orleans icon is open again after being closed six months due to COVID. But that's only half the story.

Even before COVID-19, Commander’s Palace could see the writing on the aqua blue wall. To-go food was coming strong, even at a fine-dining icon with roots dating back to 1893. Shipping products through Goldbelly was a logical next step, too. But hosting a 1,000-plus virtual party known as “The Zoom That Saved Wednesday?”

“That was not a twinkle in anybody’s eye,” co-proprietor Ti Adelaide Martin says.

These past six-plus months have tested one of the country’s oldest and most-beloved restaurants. Yet Commander’s Palace is no stranger to fighting out of the foxhole. In 2005, Hurricane Katrina shuttered the restaurant for 13 months—a stretch that cost it $6.5 million.

On September 11, Commander’s Palace reopened for the first time since closing March 16 due to COVID-19. After three stellar days, it boarded up again in preparation of Hurricane Sally. The restaurant reopened once more this past Wednesday, and hopes the whirlwind has calmed, at least to some extent.

Like it has for thousands of restaurants, independents, chains, big, small, upstart and historic, coronavirus crammed the innovation cycle. In some cases, it didn’t so much create a new reality as much as it accelerated what was already happening. For Commander Palace’s, it meant placing stock in an off-premises strategy that would have felt like asking a shark to walk upright years ago. However, it’s where the customer was headed, category or not, as younger generations started to age into the marketplace and more people—of all demographics—began to embrace modern ecommerce, like mobile payments.

Take it to the coronavirus arena and Commander’s Palace just debuted “Le Petit Bleu” last week along with its reopening. Ti Martin says the restaurant brainstormed to-go models as background chatter about two years ago. That’s about when it opened Picnic Provisions & Whiskey as well, a corner restaurant that focuses on Southern picnic fare (think Crawfish Boil Hot Fried Chicken Sandwich) and targets a large chunk of revenue from takeout and delivery. A “fast-fine” concept that meets changing demand.

GOING BACK TO THE START: Commander’s Palace, and the ‘Spirit of Hospitality’ After COVID-19

Commander’s Palace itself was searching for a nearby location to house to-go offerings for the main shop. What it landed on was the front of its accounting office next door, across from the cemetery. Le Petit Bleu is one room decked in Commander Palace’s famed blue stripes with pickup options like Crabmeat Ravigote, Muffaletta, and Miso Roasted Forest Mushroom Pasta with cashew cream and summer truffles. Customers can call ahead or just drop in.

“To-go is something our customers were already doing,” Ti Martin says. “But we just moved it over however many feet.”

Early on during the pandemic, Commander’s Palace gave to-go-only business a shot but paused when employees expressed safety concerns. It eventually restarted, with just cold food so kitchen staff could socially distance during preparation. Over time, Commander’s Palace added hot food and eventually got to about a 50/50 split.

“For every one of these things, we felt like we were building the plane while we were flying it,” Ti Martin says. “We had no choice.” 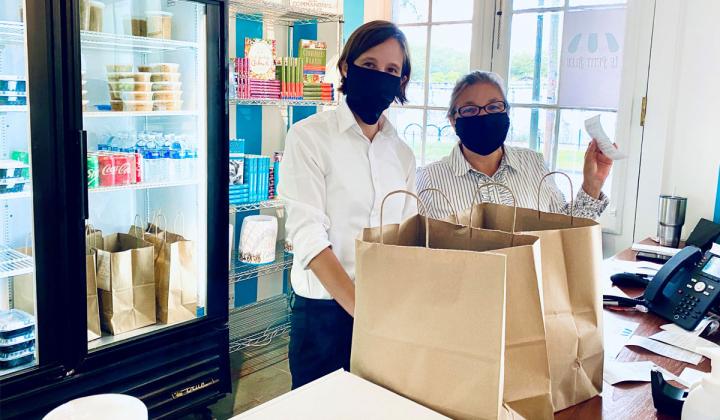 Commander’s Palace found success with some whimsical creations. Street foods like chicken on a stick, tamales, and tacos. Le Petit Bleu can do all of that, plus serve up pies and classics without stuffing the main kitchen or storage areas. Plus, it’s a visible, deliberate entry point for customers interested in something they might not have known was available before. It’s open seven days a week, with hot takeout beginning at 6 p.m. 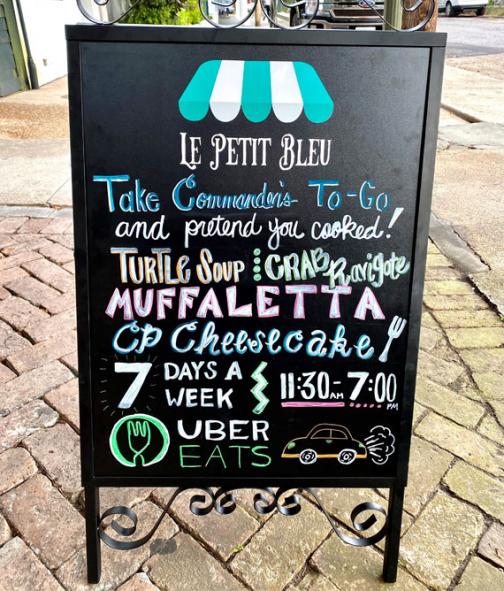 The Zoom event, though, is something else. Every Wednesday night since April, 1,000 or so New Orleanians (that’s not an exaggeration) have joined Commander’s Palace for wine and cheese parties. It started as a simple way to remain connected during a time of truly strange disconnection. James Beard-nominated “wine guy” Dan Davis headed to the wine cellar at Commander’s Palace and rotated through guests, from cheesemakers in Romania and Italy to winemakers joining in the middle of the night. Each week had a theme, starting with French. And the team dressed accordingly.

Also, Commander’s Palace kept the event local so it could literally drive wine and cheese to participants who signed up. As Ti Martin chatted last week, the GM was preparing to hop in their car and make deliveries.

Local jazz bands and musicians performed to give it an authentic New Orleans vibe. “It was the only party in town,” Ti Martin says.

Commander’s Palace wasn’t sure how to play host. That first week, it turned Zoom on and people started shouting at each other. “We were like that was crazy, you can’t do that. And then they just said, ‘no, that was really fun. It felt like a party,'” Ti Martin says.

People danced. They showed off dogs and babies. They wore outrageous hats and costumes. “And now people just go completely nuts and everybody is yelling at everybody,” Ti Martin says.

And soon, on October 7, Commander’s Palace is taking the party national.

Outside of Alabama, Alaska, Arkansas, Delaware, Hawaii, Indiana, Kentucky, Mississippi, and Oklahoma, the restaurant will ship packages across the country for $179 in what it’s calling a “showstopping Broadway party.” The package includes three bottles of wine, two cheese selections, a charcuterie selection from Cochon|Butcher in New Orleans, crackers, and preserves.

Like the local iterations, people who sign up will meet winemakers and cheesemakers and hear from Ti Martin, Brennan, Davis, and Chef Tory McPhail, a James Beard winner in 2013.

The Commander’s Palace “Social Distancing Jazz Trio,” and the Roving Reporter, will pop in on some real New Orleans locals, too.

As you can see, Commander’s Palace isn’t treating the Zoom outlet as a COVID sidestep. It’s fast becoming a real part of the company’s revenue stream and ability to reach new and core guests. And it keeps them tuned in as they consider returning to dine-in service.

New Orleans is currently limiting capacity to 50 percent, although Commander’s Palace is currently under that a bit, Brennan says, so they can “get our legs underneath us.”

Serving customers has brought forth some learnings. The restaurant put an “Occupied?” sign out front for comical relief, only to realize customers took it literally and weren’t sure if they could find a seat. 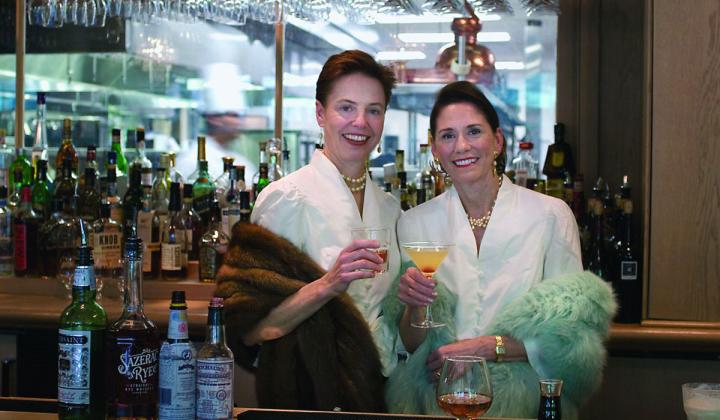 "We did everything we could do to try to survive, like every restaurant in America,” says Ti Martin.

Commander’s Palace takes the temperature of guests before they walk in. It’s asking them to wear masks when they’re strolling about and holding extended conversations with waitstaff. Nuanced details have adjusted as well. Garlic bread is brought to the entire table instead of guest-to-guest as it once was. Napkins aren’t refolded or replaced when a guest gets up. Silverware is wrapped up. Menus are accessible online or with a paper option. The wine book shows up on a plate with a pair of rubber gloves. Staff also carry gloves in case anybody wants their picture taken—a common request at Commander’s Palace.

The restaurant also halted valet car parking. But what it does offer is valet treatment. Employees open car doors and direct traffic. They’ll walk guests to and from the restaurant, if asked.

Commander’s Palace put stanchions out front so customers could wait outside without crowding the lobby. There are signs on the wall to explain everything.

Ti Martin admits she was a bit concerned on day one. The dining experience at Commander’s Palace is sacred to a lot of folks, as much as the food is.

“They’ve been very receptive,” she says. “We’ve just been very upfront. When you do your reservation here comes this thing called the ‘Commander’s Commitment’ explaining all the things we’re doing and asking you to do. … It’s not just been OK, really; they’ve been appreciative.”

Leading up to reopenings, Commander’s Palace tried to prepare staff with some de-escalation roleplaying. But Brennan says that hasn’t come into the picture so far. They read about the COVID horror stories just like everybody else. Thankfully, though, customers have embraced protocol.

The toughest part, she adds, was reopening with a staff at roughly 40 percent of prior levels. It was like picking between your favorite child, Brennan says. Currently, the restaurant is open for dinner seven nights a week, starting at 6 p.m., and Jazz Brunch on the weekends (11 a.m. on Saturday, 10 a.m. on Sunday). The music is going out on the patio. When lunch returns, they hope to bring back more people. The same is true of added dine-in capacity.

Will there be restaurant closures in New Orleans? Have there been already? There’s little question, Ti Martin says. “But I think fine dining is a way of life and entertainment in New Orleans as much, or more, than any other city I know of. I don’t think it’s ever going away,” she says.