At two dozen locations and counting, Iron Hill is filling in its system, which runs from Georgia all the way to New Jersey and Pennsylvania.

Although 2020 was hardly a cakewalk for any restaurant—particularly growing brands—Iron Hill Brewery & Restaurant didn’t let the uncertainty of the pandemic veer it off course. The emerging chain made adjustments to retain as much business as possible, but it also plowed forward with new initiatives.

“We’ve always been about our craft in each area: brewery and beer making; food and culinary; and service [and] hospitality,” says COO Joe Kopke. “We are putting our foot forward on all fronts. And I think it’s the good synergy between all three of those that has allowed us to not only embrace the craft beer scene and boom, but also thrive as a restaurant.”

Kopke joined Iron Hill shortly after Kim Boerema came onboard as CEO in 2018. Around that time, the restaurant had just shy of a dozen locations. Today its footprint has about doubled; plus the Delaware-based brand recently entered a new region, the Southeast. Kopke describes Iron Hill’s expansion strategy as competitive but also thoughtful. Regardless of the pandemic, the company aims to open three to four (but no more than five) locations each year. 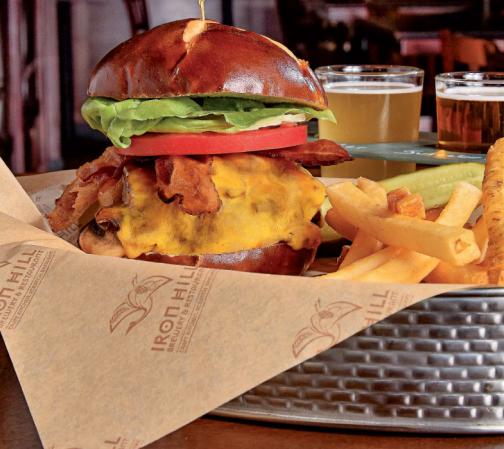 When Kevin Finn, Mark Edelson, and Kevin Davies opened the first Iron Hill in the mid-90s, they envisioned a brand that excelled both in the quality of its food and its beer program. This was well before the craft beer movement swept the nation, and at the time the cofounders only planned for a few locations. But the success of those stores combined with growing consumer interest in craft food and beverage positioned the brand for a bigger future.

In fact, Iron Hill Brewery has been rounding a number of milestones as of late. In the fall, the brand opened a large-scale production facility in Exton, Pennsylvania, which marked its first foray into the retail side of beer. The timing was especially fortuitous; Iron Hill had already laid the groundwork for selling canned beer when COVID-19 struck and decimated dine-in business across the restaurant industry.

At press time, many of the brand’s best-sellers, including Sweet Leaf IPA, Hipster IPA, and Philly Phavorite IPA were already available at retailers in Delaware and Pennsylvania, with plans to extend into New Jersey soon and eventually all of the markets where it has restaurants.

The company entered retail stores in late 2020 and is currently selling in more than 500 stores in Pennsylvania and Delaware.

“The production brewery is one of the founders’ dreams,” Kopke says. “It’s a big deal for our brand after this many years to be able to launch that and then still grow our restaurant path as well.”

With about 15–20 items on the menu at a time, the Taphouse is a way to explore new dishes and solicit guest feedback. Kopke says that while the food is still taken very seriously, the atmosphere is more akin to a fast casual.

In a way, the Taphouse is a natural extension of the brand’s long-standing Chef’s Table. The program grants chefs at each location the creative license to come up with their own specialties. As a system-wide test kitchen, the Taphouse takes that spirit of innovation to the next level.

“We’re staying true to our craft and [making] everything from scratch. We’re just trying to bring that creativity and ideation to our food,” Kopke says. “It gives our culinary team a good outlet to test a lot of things and have chefs within the company send ideas and recipes that we can try out in real-time.”

In addition to these more momentous changes, the brand has also adapted to the current crisis with a range of off-premises options that fit consumers’ varying needs. For those seeking a hands-on experience, Iron Hill’s craft meal kits provide all the raw ingredients plus step-by-step directions. In addition to takeout/delivery orders, customers who have grown weary of cooking can opt for ready-to-heat meals.

Kopke doesn’t anticipate these options going away any time soon, even once COVID-19 regulations are dialed back and dine-in business picks up. Takeout and delivery increased 28 percent during the pandemic.

Iron Hill Brewery reported 16.5 percent more to-go beer sold in 2020 than in 2019, which included growlers, crowlers and cans. The brand also sold about 125,000 cheesesteak egg rolls this past year.

“Our guests have changed. We’ve all been forced to change as consumers,” Kopke says. “We’ve really tried to expand and make it easy for the guest to choose. … It has broadened our horizon so the guest really has control.”

The chain maintained a low employee turnover rate during the crisis, too. It currently sits at roughly 18 percent, Iron Hill said.

Iron Hill will also continue broadening its geographic horizons. In 2018, the brand debuted its first Southeast location in Greenville, South Carolina, and last year it opened another unit in the Buckhead suburb of Atlanta. Plans are already underway to add a Columbia, South Carolina, store and a second Atlanta unit.

“We will always look up here in the Northeast area but also fill in from Atlanta to the Carolinas,” Kopke says, adding that the brand will stay focused on the East Coast. “We want to be thoughtful and really embrace the neighborhoods and markets that we go into and be a presence there. It differentiates us.”