Vivili Hospitality Group has hired back 90 percent of its base staff.

How One Arizona Restaurateur is Saving his Small-Town Restaurants

Skyler Reeves moved quickly, and hasn't let off the gas since.

Surviving as an independent restaurant in today’s COVID-19 arena doesn’t come without difficult calls. At the onset of the pandemic, Skyler Reeves, proprietor of Vivili Hospitality Group in Prescott, Arizona, consolidated his three restaurants, The Barley Hound, Rosa’s Pizzeria, and Taco Don’s. He then paused catering, stopped construction on a new venue, slated to be among the city’s largest, and laid off more than half of his 100-person staff.

Yet this this was just the groundwork. Like many markets in getaway destinations, Prescott was hit especially hard not. And just by dining-room restrictions, but by a sudden lack of travel as well.

Reeves arrived in Prescott in 2014. He spent 10 years navigating the Los Angeles nightlife scene, beginning as a barback before becoming one of the first employees of SBE Entertainment Group. He eventually took on a role as operations manager at 213 Hospitality, now called Pouring With Heart, which many credit as bringing the mixology movement to LA. He helped the company grow from seven venues to more than a dozen.

Reeves’ varied experience has come into play of late. He’s had to get creative to bolster takeout and invent outdoor dining models that require little interaction between staff and guests.

Today, he’s hired back 90 percent of his employee base, seen sales rise 5 percent, year-over-year at Taco Don’s (a drive-thru Mexican food join), and is working with the city on a beta-dining experience that would allow restaurants to use more outdoor space to offset indoor restrictions.

Vivili restaurants came within 90 percent of its normal sales on Mother’s Day thanks to an assembly line operation.

Reeves restructured The Barley Hound, his signature restaurant, to double capacity by adding a “backyard” expansion to the Victorian-style home that houses the gastropub. The restaurant added an 1,800-squafe foot outdoor area.

Reeves reached out to Prescott’s tourism board in order to push a new idea and is now working with the city to debut a semi-permanent structure within the city-owned parking spaces in front of his Rosa’s Pizzeria. It will allow the restaurant to move the indoor capacity outdoors. Reeves said he could tack on about 30 percent of seating to the new patio. 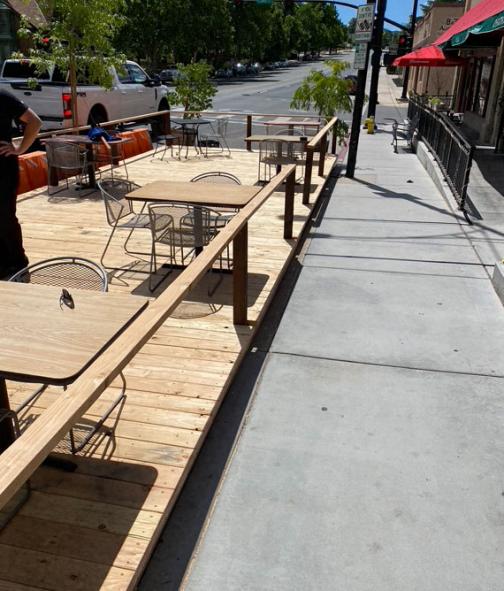 The Barley Hound added “bottle service” so tables could order large-batched cocktails, or even a bottle of vodka if the group is big enough, so they wouldn’t have to go back to the bar to re-order.

The company has given back, too, donating more than 600 meals to frontline healthcare workers.

And moving forward, Reeves wants to blend his indie philosophy with cues from large operators, like Starbucks, to reconfigure how guests order and receive food. He’s installed Plexiglas behind the bar where customers order, implemented new tech like online ordering and contactless payment, and is requiring all guests to wear masks until they sit at their table.

Reeves chatted with FSR about the changes, progress, and how he plans to keep fighting through crisis conditions.

Take us back to the early days of COVID, and the difficult decisions that followed, from consolidating your three Prescott-area restaurants to pausing the catering company and stopping construction on what would be the city’s largest venue. How quickly did you move on these calls, and what kind of discussions were you having that preceded them?

I moved very quickly. I realized restaurants were going to shut down on a Sunday. The following Monday morning, I called meetings with each of my general managers to talk next steps and to let them know where my head was at. This was also when I made the very tough decision to lay-off majority of my staff in order to consolidate costs. I usually lean on my other managers for day-to-day operations, but in this situation, I had to do a lot on my own.

Talk about the employee element. Like countless operators, you were forced to lay off a good chunk of your staff. At that point, what kind of steps did you take to stay connected and hopefully plant the seeds to recall workers later on?

In order to keep in touch, I wrote a letter that we distributed to our laid-off staff about what we were doing and how we were doing in. I wanted to let them know and be very transparent that things were uncertain and that I’d reach out to reinstate employment as soon as I could.

Fast-forward to today. You’ve rehired 90 percent of the employee base. What has that process been like? What are some ways you’ve been successful bringing people back?

Bringing employees back on board has been a slow and steady process. As we have more positions becoming available within our restaurants, we’re struggling to get people to even apply with the unemployment insurance being increased. So, we’ve had to get creative and offer new positions that entice people while also satisfying our needs within the restaurant. One example of this is our hostess. Outside of just seating guests, this person is now responsible for explaining what guests can and can’t do within the restaurants as it relates to them wearing masks and how our service is now structured. By doing this, it gives this person much more responsibility and allows for us to relay our message effectively to our guests.

I think the biggest tip I can give other restaurateurs is crawl before you walk. Start with limited hours, then gauge the demand. Especially right now, guests are pretty understanding and are willing to work with you.

What are some wins you’ve had in recent weeks? Taco Don’s being up 5 percent, for instance.

I think some of our biggest wins include being able to hire back 90 percent of our employee base, Taco Don’s, our primarily drive-thru Mexican food joint, being up 5 percent from this time last year at his, and currently having the support of the city as we get ready to debut a beta-dining experience that allows our restaurants to utilize more outdoor space to offset recent indoor dining restrictions in Arizona.

Elaborate on how you were able to come within 90 percent of normal sales on Mother’s Day despite lower beverage mix.

We offered great value. At the onset of the pandemic, we pivoted to offer a “Take and Bake” meal for six and dinner for two that was a hit on Mother’s Day. We also rolled out online ordering and touchless pick up quickly to make people feel better about the experience. I am also so proud of our staff during this time. Everyone was doing way more than what was asked of them. 10 hours bagging orders is no fun, but they knew the success of Rosa’s Pizzeria was important for their jobs.

Also dive deeper into The Barley Hound’s decision to double restaurant capacity with a “backyard” expansion. How did that come about?

We already had this in the works. But once it became clear that outdoor dining was going to be the trend to keep guests safe, within a couple weeks, we restructured our signature restaurant, The Barley Hound, to double the restaurant’s capacity by adding a “backyard” expansion to the Victorian’-style home that houses the gastropub. The restaurant is already known as the undisputed best patio in Prescott in the “front yard”, so we wanted to further stake this claim with the addition of 1,800 square foot outdoor area.

Talk about your work with the tourism board and how you’ve managed to move indoor capacity outdoors, and what this could mean for other restaurants.

Knowing that Prescott was in a tough situation with a lack of travelers, I proactively reached out to the tourism board in order to push a new idea across the board that would be mutually beneficial. As a result, we’re now working with the City of Prescott to debut a semi-permanent structure within the city-owned parking spaces in front of Rosa’s Pizzeria, one of the most beloved Italian restaurants in the city, that will allow us to move the indoor capacity outdoors. Complete with tables, umbrellas and large real trees and plants to encourage social distancing, the city is looking to take cues from us and eventually roll out similar models to better accommodate incoming tourists.

With the state’s new order to reduce capacity to less than 50 percent, we’re now able to add about 30 percent of seating to the new patio, bringing the restaurant near its original seat count, all while increasing the safety of dining by adding outdoor space.

To-go cocktails have provided a nice lifeline for a lot of restaurants. You implemented the idea of “bottle service” at The Barley Table so a group could order large-batch cocktails without going back to the bar to reorder. What’s the response been like so far? Do you see this as potentially being one of those post-COVID changes that sticks?

This is slowly catching on as we post about it on social media and people see other people ordering it. This is definitely something we’ll keep on the menu post-COVID.

How are you borrowing ideas from some big operators, like Starbucks, to reconfigure social distancing in your restaurants?

Major food and beverage chains like Starbucks and Chilis have massive teams and a corporate structure that enables them to gather information from a legal perspective and from more guests quickly in a situation like we’re in right now. Although they aren’t necessarily thought leaders in the industry, they do have the biggest support structure and the most eyes on them so they have to do things right the first time or it’s a big loss for them. These corporations also have stores around the world, so I find it’s best to pull from what they’ve gathered and steal what works for my restaurants.

Throughout this, the company has continued to give back to healthcare workers and first responders. How critical do you think it is for restaurants to stay connected to their communities during the crisis?

I think it’s so important for restaurants to stay connected with their communities, especially in a small town like Prescott. Everyone knows someone who’s a firefighter, a first responder or lost their job due to the pandemic. In times like this, everyone needs to rally together and support one another.

Broadly speaking, what would you say are going to be some of the lasting changes from COVID, or the so-called “new normal” people talk about? What trends would you put your money on?

These questions go hand-in-hand for me! As long as we’re able to do it, we’ll be carrying over to-go cocktails from restaurants and make-shift outdoor dining to extend the space of a patio.