The brand is closing in on 100 years of business.

Despite Pandemic, the Lawry’s Experience Carries On

The spinning salad bowl and other signature features are socially distant, but remain present.

To preface how Lawry’s The Prime Rib is approaching the pandemic, CMO Ryan Wilson references the restaurant’s longevity.

The brand is closing in on 100 years of business. The original Beverly Hills location has been open since 1938 and the Chicago store was founded more than 45 years ago. Wilson—who has worked at the company for 13 years—is fourth generation in the family business.

He brings up those figures to emphasize that Lawry’s is looking at the long view of recovery when it comes to the unprecedented crisis.

The journey began with the pivot to off-premises, which was not a major sales channel for the brand prior to COVID. Takeout and curbside were done sporadically, mostly just for holidays. However, teams quickly responded and pieced together standard operating procedures. Some markets moved quicker than others, but overall, the to-go business was rolled out in about a week and a half.

Once the product went live, Wilson says the next step was to understand how customers wanted to experience Lawry’s takeout. He adds that because Lawry’s is in the upper echelon of dining, the restaurant’s internal expectations were high.

“Such a huge piece of our brand is the experience and the richness of the experience—the silver cart and the brown gowns and the scale of our dining room, the aromas and all the rest of that,” Wilson says. “I was concerned initially that ‘Oh wow, people aren’t going to want to have a Lawry’s takeout experience because they’re not going to get all that.’ … I think those are still critical pieces of our brand and something we’ll always remain committed to. But there’s such a heartwarming, comforting aspect of the meal itself—the food product, the flavor profile, the textural profile of that meal—that we heard resoundingly that when people got that meal home, they felt some sense of normalcy, some connection to the past.”

Lawry’s looked forward to Easter, Mother’s Day, and Father’s Day—capitalizing on those traditions and ensuring continuity for families.

Shannon Tauschman, Chicago’s sales and marketing manager, says Lawry’s took its time to make the takeout packaging as professional as possible. The goal was to give customers dinner, not just a container of food.

“It was very comforting to hear lots of regulars say they wanted to help our restaurant,” she says. “ … They knew if they ordered through us, it was going to be done right. And I think a lot of people were very impressed with the steps we took for safety measures and delivering our product, and it still continues with our in-dining.”

When dining rooms reopened, Wilson acknowledges that maintaining the Lawry’s experience and committing to safety protocols was quite the balancing act. 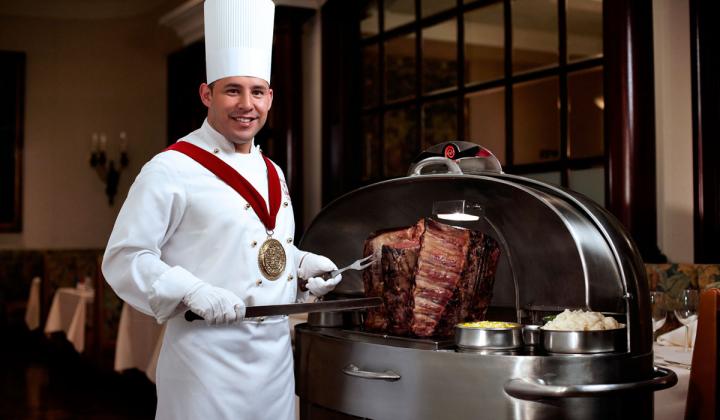 Can Lawry's deliver hospitality in a socially distant world?

However, all the enjoyable parts—the server, carver, silver cart, and spinning salad bowl—are still present, but just farther away.

Safety parameters change somewhat among the locations. The Chicago unit, which reopened July 1, requires customers to submit reservations and wear masks. Valet parking is available, and attendants will sanitize their hands and the car including keys, seat, and steering wheel upon receiving and returning the car.

At each location, silverware is rolled in napkins and dishes and glassware are brought to the table after customers are seated. Condiments are provided in single-serving ramekins. Menus are available on mobile devices or through single-use paper versions.

“The dining room feels different, but fortunately guests generally speaking are very receptive to the changes, and they understand the changes,” Wilson says. “They’re coming out to eat. They endorse what’s happening and are really pleased that we’re following protocol. I think the fact that we’re still going to do a spinning bowl salad from a little bit further away, it ends up not being all that material because people are just happy to see that spinning bowl salad and get that great flavor profile. So I think we’ve been able to bypass some of the potential issues there.”

Wilson says the initial flow of traffic to the reopened stores varied. For example, consumers flocked to the Dallas location, but the Beverly Hills unit had a much softer opening because of racial injustice protests and curfews. Across the board though, he says the company was pleased with the general level of interest and demand for dining.

But with rising COVID cases nationwide, Lawry’s has been hit with another curveball.

Wilson says that fortunately, the Beverly Hills store has developed effective standard operating procedures for takeout and curbside so it could quickly shift back into that mode. The restaurant also plans to convert its valet parking area to outdoor seating.

Still, the entire experience has been exhausting, Wilson laments.

“Our teams are tired,” Wilson says. “And back in March, I think there was a different level of adrenaline to jump in and make that pivot, but when you’re looking to make a similar sort of change in the opposite direction, our teams are tired and I also think the risk of COVID infections has gone up. … I’m in Orange County right now, and we still struggle with people not wearing masks, so that’s just heightening the levels of stress and concern.”

But as Wilson said, Lawry’s is in it for the long haul and relies on its legacy for support.

Tauschman recalls times when people would ask how the company was doing, ending the inquiry with a heavy question mark.

She simply replies by stating how fortunate she is to work for a family.

“I think a lot of big corp restaurants would’ve said, you know what? Close up because that’s just an easier response,” Tauschman says. “And the Frank family has gone through a lot of ups and a lot of downs—they’ve had everything thrown at them. Of course nothing like this, but nonetheless, they handled it.”

Mellow Mushroom Creates Recruiting Video with TikTok and Instagram Star Drew Talbert
On the Border Announces Partnership with REEF Kitchens
Can Experience Win Back Diners? NextGen Casual is Banking On It