The jump likely won't come in the next 30 days.

Bankruptcy Cases Expected to Rise Significantly Due to Coronavirus Pandemic

One attorney expects filings to uptick as restaurants reopen and evaluate business.

Before the COVID-19 pandemic, there were a number of restaurants filing for bankruptcy.

Craig Ganz, a bankruptcy specialist and litigation partner out of Ballard Spahr’s Phoenix office, says that prior to the virus ordeal, the restaurant industry was overly saturated. He expected that factor, combined with over-leverage and thin operating margins, to lead to a slew of bankruptcy cases similar to what’s been seen in the retail industry.

But now, with the virus raging on and restaurants forced to limit operations or close completely, Ganz says, it’s not even quantifiable how much his opinion has been affected in terms of the number of bankruptcy cases he expects.

“The impact of the virus on the restaurant industry is literally the worst thing that has ever occurred to the restaurant industry,” Ganz says. “I can’t come up with something that would be similar or what No. 2 would be. When you have that factor, you’re automatically going to be moving into the question of how many bankruptcies are we looking at some point here, and it’s going to be enormous.”

Steven Soule, a partner and shareholder at Hall Estill in its Tulsa office who specializes in bankruptcy law, says he has been fielding calls from concerned clients across all industries and expects more to come.

Soule advised that business owners should immediately explore all of their options to protect their business, including taking a hard look at the balance sheet and examining all income and expenses.

“They must look at ways expenses can be reduced significantly to allow the business to survive. This will include making some hard decisions, like not taking pay themselves and letting employees go," Soule says in an email to FSR.

He adds it’s important for businesses to seek legal advice to discuss what practical options might be available, such as talking to creditors about delaying payment obligations. Another option, of course, is pursuing bankruptcy.

“A business owner should not wait until it is too late to save their business and act now," Soule says.

Ganz says there won’t be a jump in bankruptcy cases in the next 30 days because many restaurants are closed and landlords are working with them. 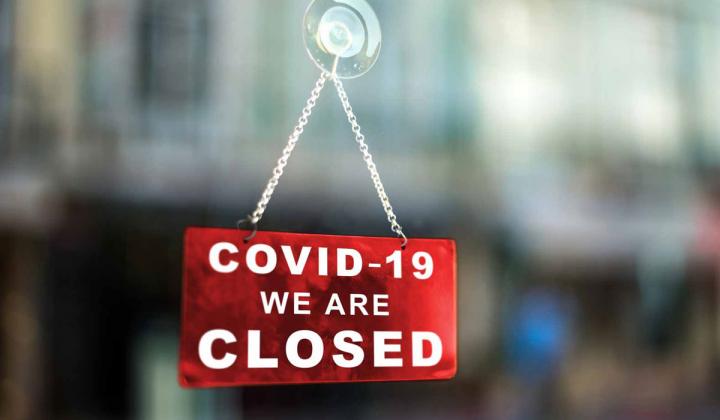 COVID-19 is going to press a lot of restaurants into difficult decisions.

“Unhealthy restaurants are not going to magically become healthier through a stimulus package,” says Craig Ganz, a bankruptcy specialist and litigation partner out of Ballard Spahr’s Phoenix office.

Once the locations begin opening in the next couple of months and operators evaluate how bad the situation is, there’ll be an uptick in the number of bankruptcy cases.

Ganz references a bankruptcy call he was recently a part of in which the judge mentioned that April may be a quiet period, but that he expects an influx of cases starting in May.

“You’ll see Chapter 11 bankruptcies because unlike the current environment we’re in where no one is truly operating or operating at minimal capacity through takeout and delivery options, once they start coming back online, they’ll realize they can’t continue,” Ganz says. “You’ll see more reorganizations because restaurants will actually be operating. It’s really hard to do a reorganization on a restaurant chain or a franchise that’s not operating.”

Ganz notes operators have to look at the amount of secured debt they have and evaluate what other debt obligations are weighing on them. The attorney says the biggest red flag is when operators spend more time figuring out how to pay bills as opposed to running the restaurant.

Restaurateurs also have to consider whether they’re truly the best operator for their business.

Although a $2 trillion economic stimulus package from the federal government is expected to provide some much-needed assistance to small businesses across the country, Ganz does not expect the funds to help companies that were already doing poorly.

“Unhealthy restaurants are not going to magically become healthier through a stimulus package,” Ganz says. “It’s not going to be a magic bullet for companies pre-virus that were unhealthy. It’s probably only going to extend a lifeline. … It’s going to be definitely favorable to companies that carried, in some instances, no debt to little debt, to be in a position to be able to have that lifeline and some of those SBA [Small Business Administration] loans. The jury is still out on what the provisions will be, but some of them have interest free provisions and some of them have debt and payback forgiveness options.”

“Quite frankly, for some of these restaurants, it may be the cheapest money they will ever see at any time in their operations,” he adds. “I think there’ll be some good stories that come out of this, but at the end of the day also, unhealthy restaurants prior to the virus are not going to have a miracle cure here.”

As an alternative to bankruptcy proceedings, Ganz says, there’s opportunities at times for franchisees to approach a franchisor and ask it to take over the location, although it doesn’t necessarily remove potential debt or personal liability.

Operators may also work with lenders to see if any resolution can be reached where they aren’t going to continue operations, but there’s a deal to be had where operators can continue to service the debt and not have to worry about lawsuits on the main business and personal guarantees.

“The biggest thing I would say overall for all of this is communication,” Ganz says. “Whether it is your lender, whether it’s some of your third-party vendors and suppliers, whether it’s your linen guy or your alcohol third-party vendor, landlords included, have an open line of communication and don’t wait and bury your head in the sand until the month ends or three days after the new month begins. You need to be proactive. You need to get on this soon and communication is going to be key.”