Chef employment dropped for the second straight year, but salaries—for some—are on the rise.

There are less chefs working in America. For the second consecutive year, chef employment dropped, according to data from the Bureau of Labor Statistics. In 2018, there were 128,600 chefs and head cooks working in the U.S., which is a 4.3 percent drop compared to its peak level two years ago.

A new study from Chef’s Pencil found that although the number of chefs dropped, the number of cooks continues to grow. In 2018, there were about 2.4 million cooks. “This may indicate a continued growth of restaurants and eateries, but concentrated in the lower-end of the market where chefs and head cooks are rarely employed,” the study said. 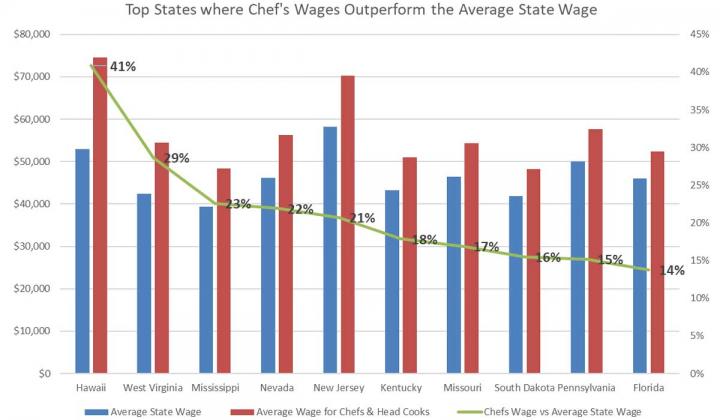 The study found chefs in Hawaii earn 41 percent more than the average Hawaiian.

TDn2K also found successful operators are looking beyond compensation to up their value proposition. Brands investing in more leadership development opportunities that spend more time on training tend to have better numbers when it comes to turnover, TDn2K said. 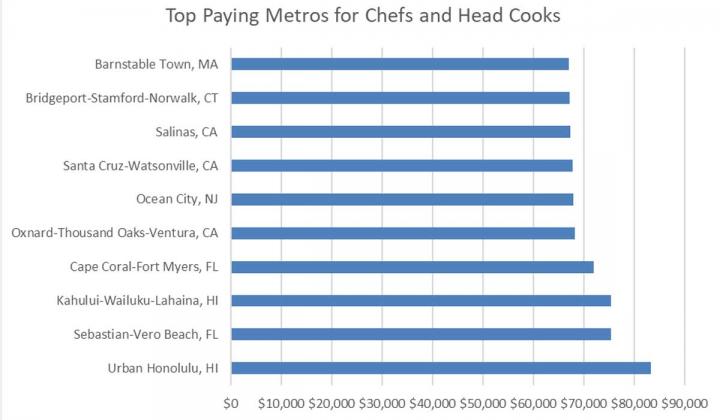 Honolulu is the top paying metro area with chefs earning an average $83,250 per year, according to the study.

Although employment dropped for chefs, salaries are at an all-time high. On average, chefs and head cooks earned $52,160 in 2018, beating out the national wage average ($51,960).

Hawaii took the top spot as the best state for chefs. Chef’s Pencil found chefs in Hawaii earn on average $74,510 per year, or 43 percent more than the national average. New Jersey came in second with an average salary of  $70,260 per year. The study found chefs in Hawaii earn 41 percent more than the average Hawaiian, followed by West Virginia (29 percent) and Mississippi (23 percent).

On the metro level, the study found Honolulu is the top paying metro area with chefs earning an average $83,250 per year. Florida’s Sebastian-Vero Beach follows with an average salary of $75,450, and Kahului-Wailuku-Lahaina, Hawaii with $75,430. 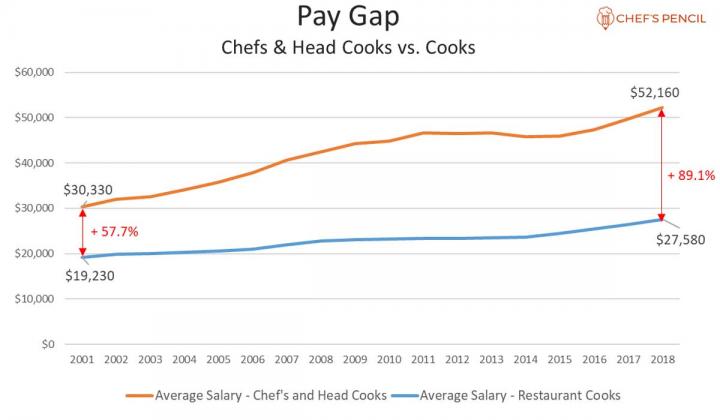 Cooks, however, are in a different boat when it comes to pay. The pay gap between cooks and chefs is so big, a promotion could almost double a cook’s yearly earnings. The battle to increase minimum wage is helping those in lower positions. Almost a dozen states are in the process of incrementally raising minimum wage, but there is no strategy to help close the significant pay gap between cooks and chefs.