There's no denying it: Being a server is not easy. But don't forgive rude employees who misrepresent your brand.

The Reasons Customers Swear Off Restaurants

There are many ways to keep guests in their seats. And plenty of ways to lose them, too.
June 2019 Danny Klein

One positive side effect of rising wages, as far as restaurants are concerned, is higher consumer spending. Does that balance out the labor issue? Probably not, but it doesn’t hurt, either. In last year’s U.S. Food Expenditure report—an annual USDA study—it found that food-away-from home spending was higher than previous estimates. Full-service restaurants have held steady at 35.8 percent of the FAFH market over the last 20 years. In 2017, U.S. consumers spent a record $1.62 trillion on food and beverages. Of that figure, 53.8 percent, or $869 billion, went to food purchases away from home. As the national median income rose from the 20-year low of $54,569 in 2012 to $61,372 in 2017, guests’ propensity to dine out lifted as well. In 2017, food-away-from-home purchases increased $24.7 billion from the $844.5 billion spent in 2016.

But while guests are dining out more, traffic remains challenged. This likely has something to do with the fact that, per the Bureau of Labor Statistics, the number of restaurants jumped close to 16 percent in the past 10 years (The NPD Group counted 660,755 total U.S. restaurants in spring 2018).

This past spring’s count, however, was a percentage point decline from the previous year. Last year’s growth was the slowest rate in the past eight years. It suggests the restaurant industry ballooned to meet rising demand, as well as take advantage of lower barriers to entry during the Great Recession, like more affordable rents and willing landlords, but has now course-corrected a bit. Like retail’s retraction over the last decade, there were too many restaurants, too few customers, and not enough money to go around.

What this reality created is an industry with more willing customers, but less room for error. If a customer receives a subpar dining experience, whether that’s via online ordering or in the restaurant itself, they can bolt to a host of options. Whiff a core experience promise today and the guest could be gone for good.

So a good question to ask is what are the deal breakers? What issues would a customer let slide and what are the ones that will have them swearing off your restaurant?

Supply platform Zoro surveyed close to 1,000 diners who eat out at least once a month in an effort to answer that dilemma. It isn’t always possible to make everything perfect. But there are simply a few operational elements you can’t get wrong.

“It can be funny to hear about the outrageous things people have seen in their food at restaurants, but for restaurant owners and managers, these types of incidents are no laughing matter,” says Corie Colliton, Project Manager at Zoro. “These findings show that every member of a restaurant's staff, from the owner to the valet driver, needs to prioritize cleanliness and professionalism. Even one mistake in either of these areas can affect your restaurant's bottom line and turn a loyal customer into someone who puts your restaurant on blast via Twitter or Yelp."

Eat with your eyes

Before a customer gets their plate, they’re walking through the front door. The last thing a guest wants to see is health hazards, long wait times, and awful service. Ever walk into a restaurant and stand awkwardly around, hoping for someone to greet you? That might be forgivable on a busy night. That same host employee visibly ignoring the customer, though, or being rude, is probably not. Or witnessing that same scenario in an empty restaurant where the worker simply doesn’t seem to care.

As the chart below shows, frequent diners jump right to the service issue at 83 percent. That’s a sit-down restaurant’s greatest opportunity to separate from counter-service competitors. It’s also the most-fickle point. Get service right 100 percent of the time and guests might forgive other setbacks. 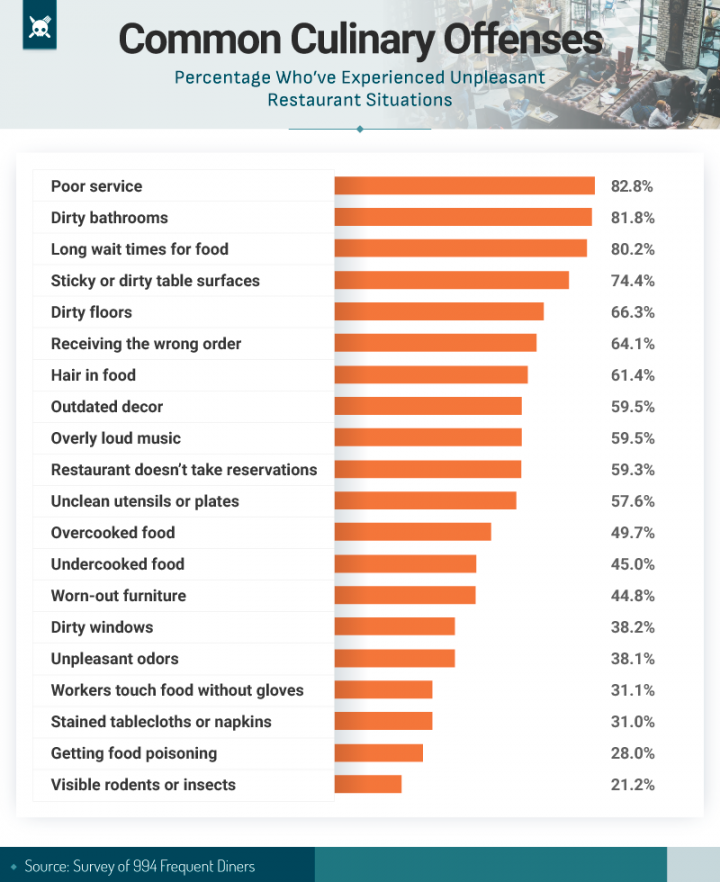 Another interesting figure here is the 64 percent mark of getting the wrong order. That’s pretty much an attachment to good service. Communication will always be key on the floor. It’s one area technology can help. But, at the end of the day, training is always the No. 1 fix.

Zoro pointed out the high number of customers finding inedible things in their meals—61.4 percent saying they came across a hair. Others noted everything from cigarette filters to chicken heads. Obviously, no restaurant wants to make this mistake and it’s alarming to think it happens this often. More than one in five respondents also noted seeing a rodent or insect crawling on the floor. Especially this time of year, a pest management program might not be a bad investment.

Unsanitary practices also proved a big deal breaker. Close to 75 percent of diners said they had sticky or dirty tablets, while 66.3 percent complained of dirty floors, and nearly 58 percent got dirty utensils or plates. Alarmingly, more than 30 percent saw restaurant staff handle food without wearing gloves. These are the kind of fixes that remind restaurateurs why employee retention is so important. Every operator stresses good practices. Having them carried out consistently, however, is another story. It’s why a great GM is a priceless piece of any successful restaurant.

The graph below shows the top 10 reasons people wouldn’t return to a restaurant, broken down by generation. Kind of interesting to see millennials prove more flexible than Baby Boomers on some issues, like rodents and food poisoning. Generally speaking, this generation is more keyed into broader ticks, like what a restaurant stands for and sourcing, and if this is a place they can see peers eating, than nitty-gritty details. 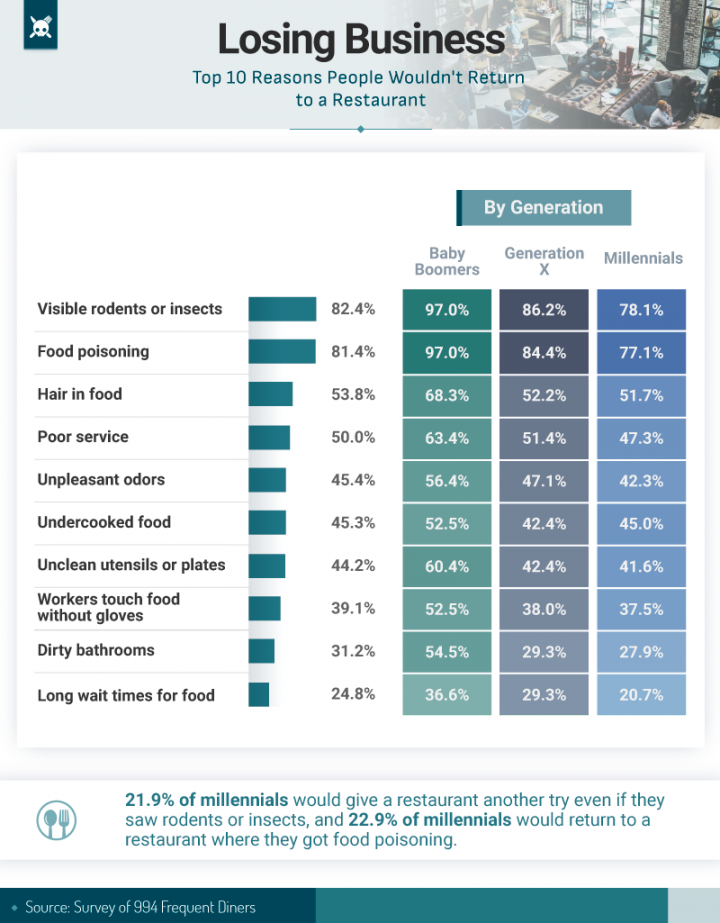 Again, the data shows, keep pests out of the restaurant. Imagine trying a new spot and seeing a rat run across the floor. Remember, there are no shortages of restaurants in today’s marketplace. And someone out there doesn’t have a rodent problem.

Some other notes: Although 45.3 percent of the respondents were turned off by receiving undercooked food, 44.2 percent said they would not go back after given unclean utensils and plates, and 31.2 percent were grossed out by dirty bathrooms, a bigger reason people would not return to a restaurant had to do with the service. Fifty percent of diners. That point can’t be stressed enough. Yes, this labor pool extremely challenged. Finding and retaining employees has never been harder. But know when to cut bait on a server who’s misrepresenting your brand. Front-of-house staff have as much to do with guest frequency as anything else you implement.

A big takeaway: One in four people posted an online review after eating in a restaurant with poor hygienic conditions. It’s one of the sad truths about today’s online search process. Guests tend to either post negative comments, really glowing ones, or nothing at all. What their issue is, though, matters. If it’s, “a roach ran through my pasta,” it’s going to weigh heavier than, “I thought the crab cakes were just OK.” Same is true if it’s, “My server was rude and took 45 minutes to refill my water,” versus, “my server was very attentive but the burger wasn’t cooked medium rare.” 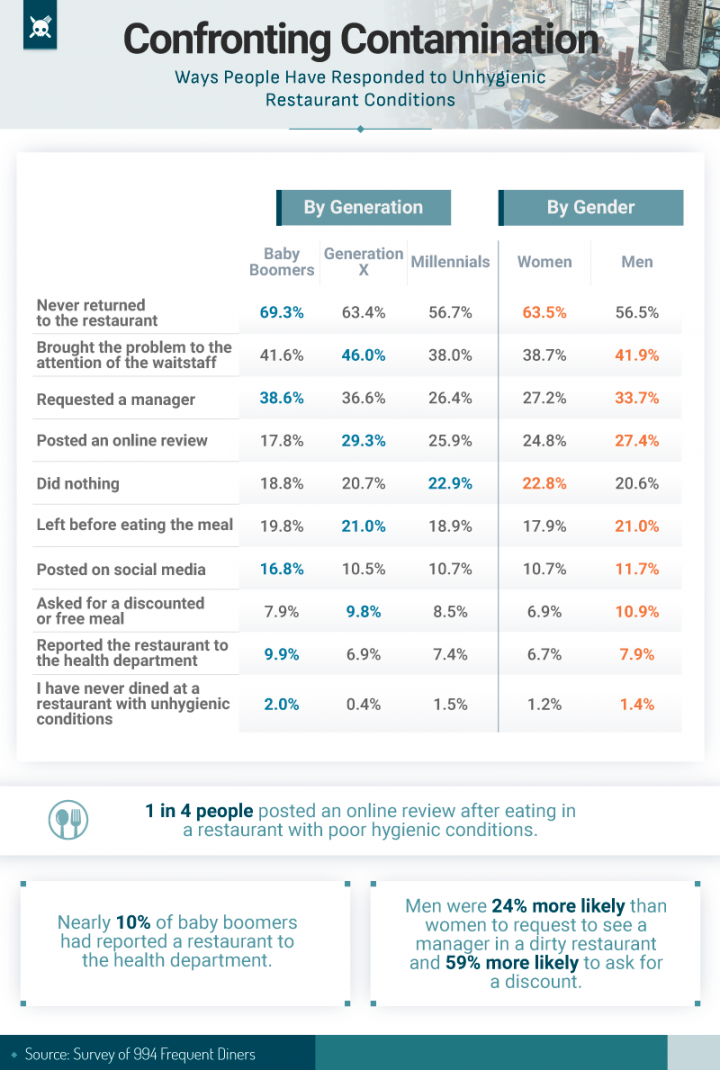 Nearly 10 percent of Baby Boomers in the study reported a restaurant to the health department. That’s clearly a bad look.

What this all shows is that diners agree, mostly, on what bothers them about a restaurant’s practices. They just don’t always respond in similar fashion. Millennials tend to be more passive while eating, with nearly 23 percent doing nothing at all when confronted with unhygienic conditions.

As noted before, guest-facing employees are the lifeblood of repeat visits. The graph below shows the most offensive behaviors. 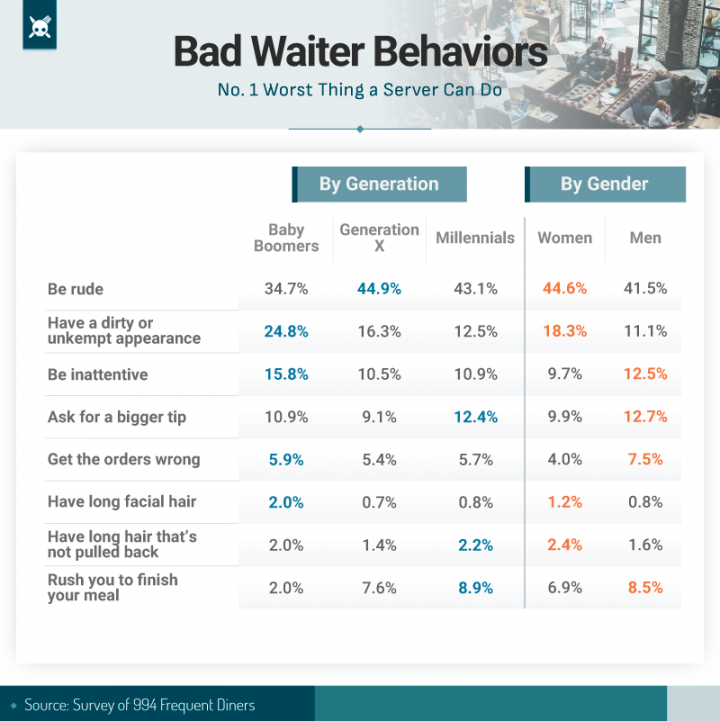 It stands out that being rude is more important than getting an order wrong. Most people will let that slide if there’s an apologetic tone and the issue is quickly remedied. Treat someone paying good money with disrespect, however? A quick recipe for a bad review and a sure-fire trip to a competitor.

“There's no denying it: Being a server is not easy. Yes, on the surface, a server's job is to answer questions, take orders, bring out food, and refill drinks. However, the real job of a server is to make people happy—and that is one of the hardest jobs of all,” Zoro said.

How a server treats a guest is the most important element of all.

A telling millennial stat: They were the most upset of the three generations by servers who rushed them to finish their meal. This fits other studies. Millennials look to dining as a communal, social event. It’s where they spend their disposable income to connect with each other. Vacations aren’t as financially feasible to this generation as they were to Baby Boomers. So millennials go to nearby restaurants, order sharables, and communicate. Rush that process and they’ll realize they don’t belong at your restaurant. It’s not a segment any operator wants to alienate.

Where are the issues going down?

The breakdown below speaks to the specific segments. Sixty-two percent of people pegged their worst restaurant experience in the mid-priced category ($11–$30 per entrée). It probably matters that spending more than $5 at a fast-food restaurant results in higher expectations. On the other side of the spectrum, most fine-dining establishments have sanitary and service issues covered. If they don’t, they probably won’t be in business for long. 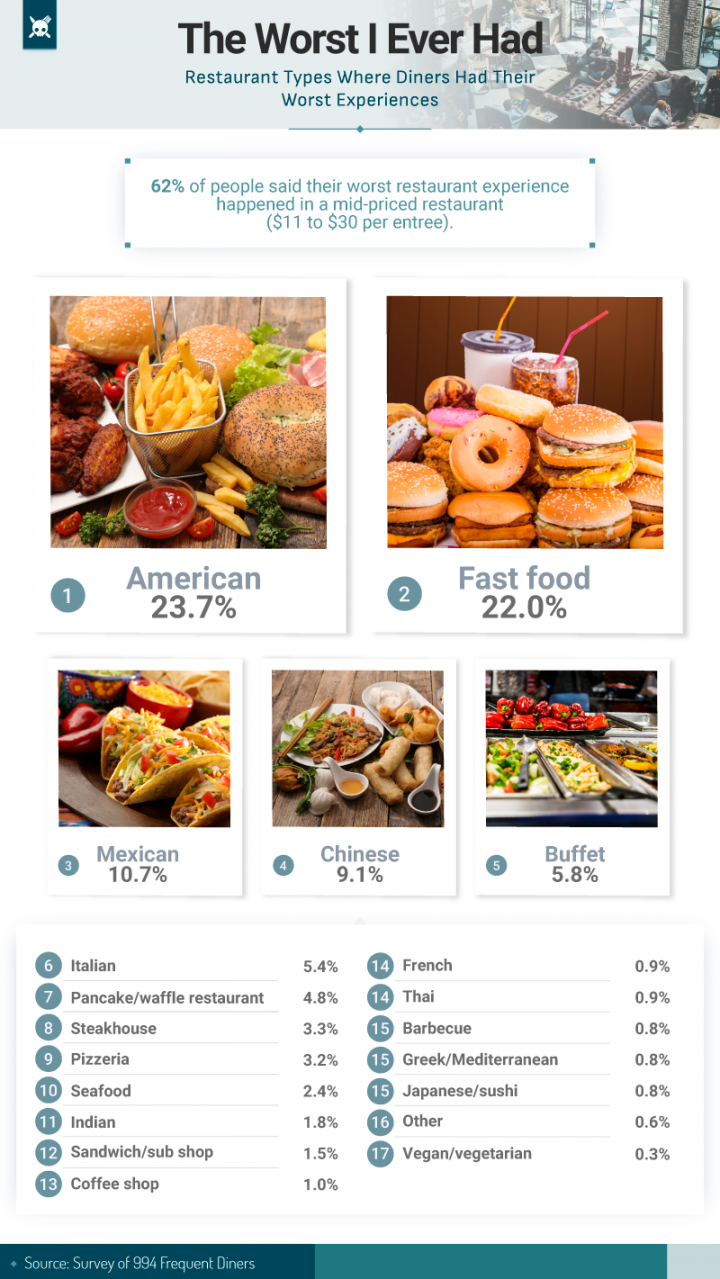