“I sincerely believe there is a trend toward just being an actually genuine good thing.” —Ellen Bennett, CEO and founder, Hedley & Bennett.

As head of the Apron Squad, Ellen Bennet has the industry talking about quality with those brightly colored, chic aprons that every hot chef is wearing.
December 2018 Laura D’Alessandro 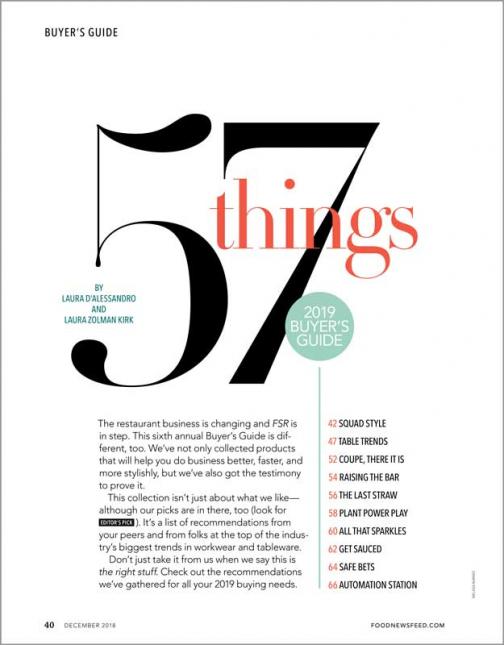 Much like her super stylish and functional aprons, Ellen Bennett is a problem solver. After her own experiences in restaurant kitchens, Bennett saw the need to reimagine workwear for the line. Six years later she's turned something that was originally an afterthought into a centerpiece of style and functionality with her aprons and full restaurant apparel line Hedley & Bennett, or affectionately H&B.

"I think that's just how my brain works—OK, what can I do to make this better?" Bennett says. "Ever since I was a little girl, I'd just like to look at something never for what it is but what it could become. Even when we started H&B I was like, one day we're going to have a factory."

Bennett's bright and airy apron factory, the apron squad's HQ, is located in Los Angeles, and rightly so. Bennett is at the epicenter of where so many creatives go to make big dreams come true. One of Bennett's dreams when starting H&B was to make aprons for the best chefs in the world.

"I wasn't thinking about the size of the company I would have, I was just really focused on how I was going to do this and I just started running," Bennett says. "I worked with chefs one-on-one to collaborate, to find the best fabrics, to use the best products—where should the pockets go—all the best stuff."

The impetus of the dream? As Bennett says, "Everyone feels like shit in a kitchen." She sought to make something that would make everyone look and feel great. "Something functional, beautiful, and rad—to change the culinary world and give people a sense of pride."

Bennett's drive to infuse kitchen workwear with a sense of purpose and quality follows suit with much of the restaurant industry. As many restaurants have pulled in more local ingredients and focused on food transparency as well as sourcing quality products for the table, like local handmade ceramics, the kitchen uniform has changed, too.

"There's a whole movement for better knives—let's not buy garbage, let's buy things that are sincerely better, and I think chefs are huge believers in that in so many ways," Bennett says. "It started in some ways with farm to table, having the best ingredients in your restaurants, having all these ceramicists pop up everywhere, having my company pop up. It's an evolution of all the components of the kitchen that are just as prevalent as the food itself."

But it's not just about the prettiest vegetables, or the prettiest aprons. There's more to it than a shiny veneer, or a shiny Instagram, Bennett says.

"I sincerely believe there is a trend toward just being an actually genuine good thing," she says. "And, of course, for all of the people out there doing the real quality work, there's 800 more who are doing overseas stuff that's just not quality."

The consumer demand for authenticity is evidenced by the trend toward wellness. Consumers seek wholesome meals, not something glitzy with artificial ingredients. Big chains are seeing the trend just as much as the independent restaurants leading it.

"There's a newfound appreciation for good food—nutritious food," Bennett says. "It's about caring for yourself mentally, spiritually, physically. How do you tackle living life as effectively as you can on all levels. I think there's a lot more awareness to that, which is often even in really huge companies like McDonalds. I don't do McDonalds but at the top of that totem pole, they're literally creating meals that are healthy and calorie-counted and that's because the world is trending in that direction."

Get Ellen's picks for your squad's style, along with ours, in this slideshow: 12 Things Every Restaurant Worker Wants to Wear.