Twelve U.S. Restaurant Recognized as Best in the World

Twelve U.S. restaurants garnered awards in the Elite 100 Restaurants 2014, an annual poll sponsored by Champagne Laurent-Perrier for private-jet-lifestyle publication Elite Traveler. Four of the top five 100 restaurants are from the U.S., with Alinea, Grant Achatz’s Chicago restaurant with an 18-course tasting menu, claiming the title of best restaurant in the world for a third consecutive year. 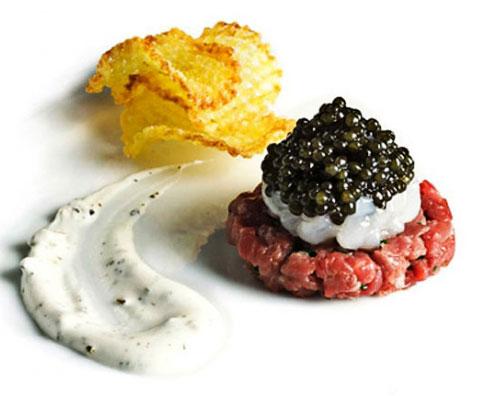 Alinea, Grant Achatz’s Chicago restaurant, was named best restaurant in the world for the third year in a row.

The U.S. was second to France, which had 17 restaurant represented, while the U.K. also had 12.

New York’s Eleven Madison comes in as the fourth best restaurant in the world, a dramatic rise from its position at No. 13 on the 2013 list.  Eric Ripert’s Le Bernardin sees a similar rise, coming in at fifth place, up from No. 12 in 2013.

Acknowledging this recognition, Chef Daniel Humm of Eleven Madison notes how his approach to menu development has changed over the years.

“Earlier in my career my food was defined by intricacy and by techniques, with ingredients sourced from all over the world,” he says. “But as I worked more, gained confidence, and developed perspective, my food changed, becoming increasingly focused, and more geared towards simplicity and the goal of using the best possible ingredients. Today, I try to emphasize seasonality, on what’s growing around me, and on letting those ingredients shine, and also telling a story with them.”

New York boasts six restaurants in the Elite 100 Restaurants 2014, with three restaurants making it into the top 10.  California has four restaurants, and Chicago has two. Chef Thomas Keller’s Per Se and The French Laundry both made the Elite list of top 100 restaurants.

The U.S. restaurants are (ranking on the list in parenthesis):