The leaders at Davidson Hotels understand that the key to building a destination-worthy restaurant started with an F&B dream team.

The recent launch of Davidson Restaurant Group under the hospitality company of the same name reflects a larger shift in how hotels approach food and beverage.

The world of hospitality is wide reaching, encompassing any number of experiences. But whereas restaurants and bars can function as their own stand-alone operation, hotels are almost always married to restaurants. Even if it’s a simple breakfast-and-lunch café, lodging enterprises—from bed-and-breakfast homes to economic hotels to massive resorts—must offer their guests something by way of food and beverage. And as more consumers prioritize high-quality, unique dining, it behooves hospitality brands to follow suit.

Atlanta-based hotel management company Davidson Hotels & Resorts is no stranger to conceptualizing and operating award-winning properties for everyone from big-box resorts for Marriott, Hilton, and Hyatt to boutique concepts for forward-thinking brands like Kimpton and Thompson Hotels. The company has, after all, been doing it for more than 40 years. But about six years ago, after launching luxury-lifestyle division Pivot Hotels & Resorts, the company realized that it was time to branch out with its specialty food-and-beverage services. The goal: develop head-turning concepts that would not only garner the attention of discerning travelers, but locals as well. From there, a specialized F&B division under the moniker Davidson Restaurant Group was born.

“We’ve been in the food-and-beverage business for a long time. We’ve always done a great job on that side and that’s something that’s always been a part of our company that we offer our clients, but the culinary scene has changed over the past decade,” says Thom Geshay, president of Davidson Hotels & Resorts. The company had dozens of dining and drinking spaces across the country but had never celebrated that, he adds. “So we thought it was high time that we let everyone know.”

The leaders at Davidson Hotels understood that the key to building a destination-worthy restaurant started with an F&B dream team. 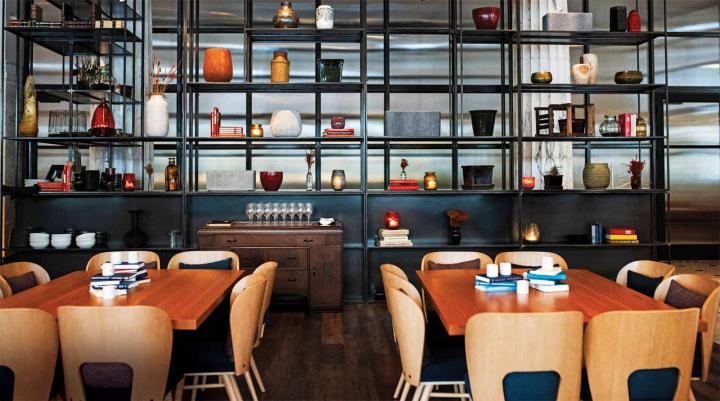 “We’ve been talking about what we want to do differently. What do we want to do to make sure we stand outside the box to compete with not only hotel restaurants but also independent restaurants?” says Garron Gore, director of restaurant and bar development. “Because at the end of the day, everyone has to make a choice of hotel, whether it’s independent or non-independent. So it’s taking our likeminded approach to food and beverage [and] looking to create a profitable business around one of the hottest trendsetting restaurants.”

A small, but mighty team of eight, Davidson Restaurant Group includes specialists for every key component to a great restaurant: concept development, corporate executive chef, operations and execution, catering and banquets, analytics, and three field-facing reps. Unlike most hotel management operations, Davidson’s food-and-beverage department is highly specialized, eschewing the carbon copy approach to dining that becomes the default for some hotel groups.

Even though the group is technically a third-party management company, it values building concepts from the ground up. Taking that approach a step further, Davidson customizes its restaurants to fit the surroundings. “Food and beverage is really a street-corner business,” Geshay says. “Even in the same city, there isn’t just one food-and-beverage solution that works for everybody.”

Davidson’s first goal was to rethink the distinction between a typical hotel restaurant and a destination restaurant. In the foodie age, on-property restaurants can no longer count on hotel guests as a given. 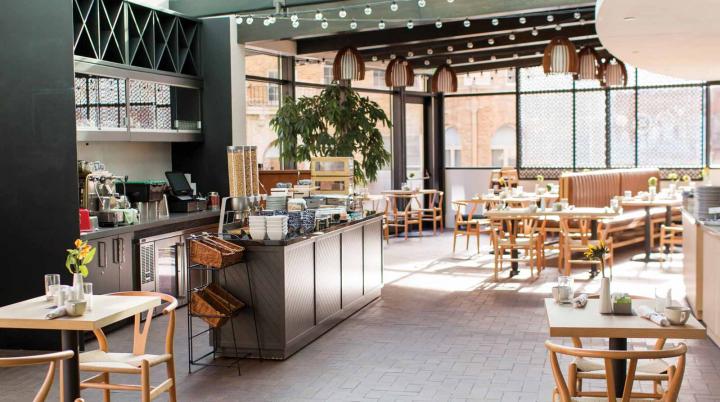 Bespoke concepts like Giulia, a sexy Northern Italian concept inside the recently revamped Hotel Emery in Minneapolis, and Woodie Fisher, a seasonally driven neighborhood restaurant in Denver housed within a converted historic fire station adjacent to the Hilton Garden, have garnered attention locally and nationally thanks to implementing a specifically stand-alone feel. Hotel guests who eat at these concepts don’t feel like they’re sticking around on-site, and that’s the point.

“In the ’70s, ’80s, and ’90s, we saw a huge boom of these chain restaurants, and everyone forgot about hotel restaurants. Luckily it’s now having a resurgence, but we’re seeing a lot of developers attach restaurants to the side of the hotel with a separate entrance; they’re actually making their own entity,” Gore says. “We’re trying to create amazing, award-winning restaurants that people know that don’t have to be associated with a hotel.”

“Food and beverage is really a street-corner business. Even in the same city, there isn’t just one food-and-beverage solution that works for everybody.”

In order to create that experience, the F&B team takes on the operational mentality of an independent restaurant. Branding and marketing had to be entirely separate from the hotel concept, while everything from interiors and plating to working with food purveyors required a separate identity and division of space. It’s the same vision explaining the influx of hoteliers offering multi-concept operations under one roof, so that it’s not unusual to have a grab-and-go gourmet coffee shop, see-and-be-seen rooftop pool bar, swanky cocktail lounge, and award-winning restaurant all within reach.

“When you’re in the restaurants themselves, they have a very different look, feel, and design from the rest of the property,” Geshay says. “All of them are connected to the hotel and even share some services like the kitchen, but when you enter the space, we used a different designer for the food-and-beverage space than the hotel space.”

This special attention to detail is certainly an added perk to the guest experience, but what about the return on investment? After all, making the switch from big-box resort concepts to an authentic, indie hot spot requires a certain investment of time, ingredients, and labor. To that question, Gershay points out that it’s hard to deny the success of a restaurant that routinely fills every seat in the house. 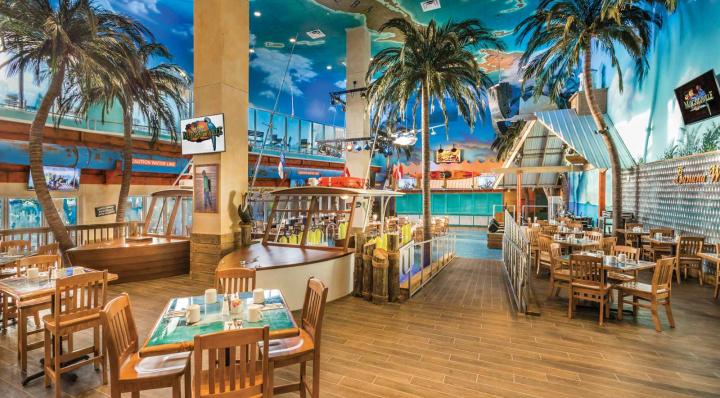 “We have always looked at our food and beverage as a profit center for our hotel. A lot of people who don’t focus on the food-and-beverage side think of hotel restaurants as a loss leader,” Geshay says, adding that factors such as location and branding play a part in consumer decisions. “Having a restaurant or brand that is unique or different, that speaks to them, that they feel great in—that becomes a purchasing decision.”

Beyond the guest experience, a dedicated F&B division also stands to boost employee satisfaction and retention. For one, the structure ensures the restaurants are not an afterthought and accordingly have the resources and leadership to attract the best employees who can grow within one restaurant and then, should an opportunity arise, move to a sister property.

“Our service standards have grown quite substantially. The servers aren’t just there to take food orders; they’re there to drive you on a food journey,” Gore says. “Our training has gotten more in-depth, and technology has changed so that we’re seeing more handheld tablets and pool ordering.” 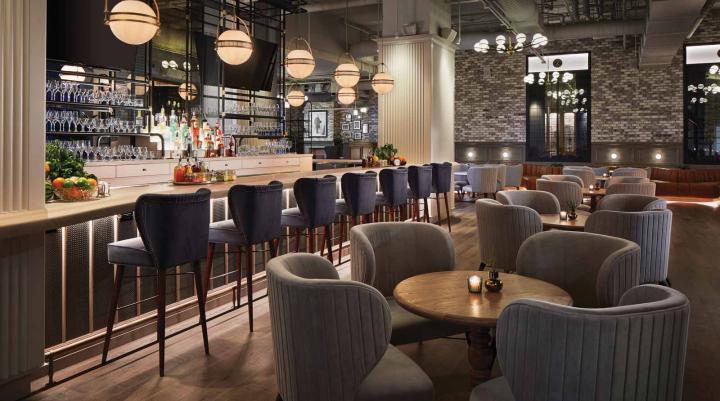 The Bar at Hotel Zachary

Davidson’s parent hotel management group is reaping the benefits as well. The new restaurant arm has not only served as a marketing component to promote existing F&B services, it has also helped compete against other third-party restaurant groups and specialists.

“We recently had a hotel that a client of ours had acquired,” Geshay says. “We would have managed it regardless, but they thought they’d outsource the restaurant. Our pitch resonated better. Without our restaurant group, perhaps we wouldn’t be operating that property today.”

Today, the restaurant group has more than a dozen new properties in production and another 50 expected to boost that collection soon. Aside from all the creative, financial, and reputable benefits of launching a separate restaurant division, one of the things that is most exciting for Davidson is elevating the hotel experience through the lens of food.

“Gone are the buffets and the prix-fixe menus and the stodginess of restaurants,” Gore says. “People used to go to dinner and a show, but now dinner has become the show. At the core, dining and drinking hasn’t changed too much in 100-plus years. It’s about how you become more efficient and streamlined and agile on your feet than anything.”