Monir Zamel, owner of Andrew’s Coffee Shop in New York City, with his son, took control of the restaurant’s TripAdvisor page in January, and the year-over-year sales jumped from a modest 1 to 5 percent.

How Restaurants Can (Finally) Take Control of Their TripAdvisor Page

Monir Zamel wasn’t exactly sure where the year-over-year boost was coming from. January at Andrew’s Coffee Shop, a full-service venue located just steps from Macy’s Manhattan flagship, was off to a reasonable start. Sales were tracking around 1 to 2 percent better. Then, those metrics suddenly spiked to 5 percent.

“It’s an odd coincidence that we did this and suddenly we jumped,” Zamel says.

Two weeks earlier, Zamel had tested a technology that operators throughout the industry have yearned for since the Internet turned consumers into critics: He took control of his restaurant’s TripAdvisor page.

Early in 2017, TripAdvisor launched its Premium for Restaurants subscription to give the 4-million-plus restaurants on the global network a chance to assume ownership in ways they couldn’t before. Instead of just letting users dictate the experience, operators now had a sizable hand in the process.

This was an opportunity Zamel was wise enough to embrace. His restaurant has more than 1,000 reviews on the site and, due to its location in the heart of the city, attracts a wide-ranging audience that increasingly relies on digital outlets to draw up travel plans. “Honestly I get people who come in here who almost feel like family. They come in every year,” he says. A study by Oxford University, the latest of its kind, showed that $478 billion in travel industry revenue was influenced by the site in 2014.

There’s no denying TripAdvisor’s ability to leverage traffic. The same is true, however, of its potential to cripple an operation.

Bertrand Jelensperger, TripAdvisor senior vice president of restaurants, says the premium service was developed in response to operators repeatedly asking for a more prominent seat at the table.

“We had a lot of feedback from restaurant owners saying, ‘OK, we would like to take advantage of these amazing tools you have been building for us to be able to speak for ourselves,’” he says. “To send some messages and to get a little bit more control over our page. So when a user is visiting TripAdvisor, we have the ability to influence them so that we transform more visitors into customers.” 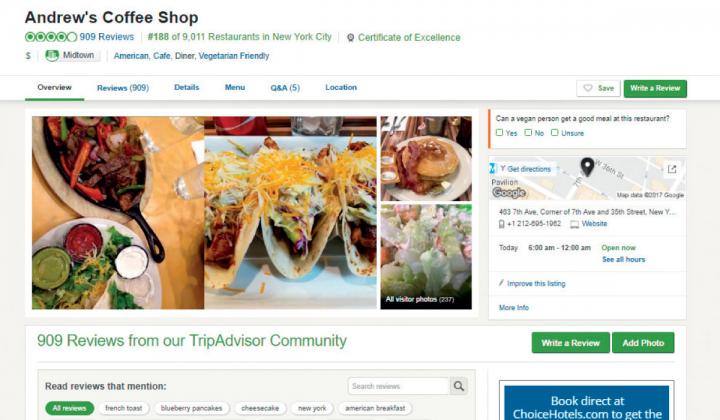 It starts with the Storyboard feature. This allows restaurants to replace the once-static home image with a presentation that showcases a restaurant’s best features. The owner can quickly create a dynamic video that combines images and reviews. This is the first thing users will see when they land on the page, and it makes an immediate impact, Zamel says.

There is also an option to select Favorite Reviews, which can be highlighted and moved up the page at the restaurant’s discretion. TripAdvisor gives an operator the ability to track those metrics as well.

After 12 days, Zamel says, around 50 people logged into his Favorite Reviews. That means random people finding his restaurant, who could have scrolled anywhere and read anything, were directed exactly where he wanted them to go. In fact, one of those customers came in and left a five-star review in his wake. There’s something to be said about high expectations. “They were definitely not disappointed. People are coming in with a positive attitude, and that means a lot,” Zamel says.

TripAdvisor expanded these analytics even deeper. Restaurants now have a chance to glean actionable data regarding their performance. It also tracks the competition.

For example, if an operator who owns an Italian restaurant wants to know what the five best-performing Italian spots in the city are, he can. And TripAdvisor will show you exactly what those reviews are saying and why the eatery is successful.

Zamel used the service to chart some patterns. He wanted to see how many people were clicking on his page in the last three months, six months, even stretching back a year.

“One thing I noticed is when I went back a year there had been a dramatic increase in the amount of clicks on our site. And I attribute that to the fact that we started responding to reviews around that time,” he says. “The more we responded to reviews the more people felt comfortable with it and maybe recommended it to more people.”

That’s another thing about TripAdvisor, Zamel points out. Especially with the premium tools, a restaurant can figure out what’s going wrong and what’s working, and try to build off or correct those insights. All they have to do is listen.

A survey conducted in 2015 across 14 countries on behalf of TripAdvisor showed that 85 percent of users agree that a thoughtful response to a bad review improves their impression of the business. Eight in 10 also believe it proves the establishment cares more about its guests.

Zamel takes it a step further. Several reviews kept popping up about his restaurant’s dingy bathrooms. Similar to spending every day with a loved one, Zamel and his staff didn’t notice the change since they were so familiar with the place. But after reading the complaints, Zamel changed his lens and saw the reality: The grout needed to be refreshed and the dim lights didn’t do the ambiance any favors.

“So we remodeled the bathroom right after the holiday season,” he says. “We have a brand-new bathroom and the customers are loving it. But maybe I wouldn’t have paid attention to it if I didn’t read that a couple of times. Sometimes you get to see things you wouldn’t have otherwise. You can’t just dismiss the complaint as the customer is being a pain. Sometimes they’re onto something.”

And, undeniably, sometimes the customer is just being a pain. That’s where TripAdvisor’s response function is so critical.

Zamel answers every review. He will first apologize, explain what they normally do when problems arise, and then extend an invitation to discuss the issue, saying the guest can call the restaurant and request to speak to him by name. That’s never happened, he says, but it shows the disgruntled diner that he cares and, perhaps in response, they will give the restaurant another chance.

This too has resulted in tangible results. “I can also ask them, is there a way we can make things better? Not just I didn’t like this. But what didn’t you like about it and how can we improve on it?” he says. “Sometimes people will tell you it’s too salty, it’s too dry, it’s too this, and I look into it.”

TripAdvisor Premium for Restaurants, which also includes priority live customer support, is priced based on a restaurant’s website traffic per month, starting at $29 and working its way up. There’s also an annual discounted plan as well, Jelensperger says.

“I’m very happy with the way this is working,” Zamel says. “I’ve seen an uptick and hope it continues. To me, a 5 percent increase year over year, if I can do that every year, I’d be in heaven.”