Pickles made from watermelon rind.

How Restaurants Can Fix Food Waste for Good

Chefs find ways to turn unused parts into ingredients, to repurpose extras, and to rethink the purchasing paradigm for a higher yield.
June 2017 Amelia Levin

Forty percent. That’s the amount of food produced in the U.S. that the USDA estimates will end up in landfills, even as one in eight Americans go hungry. And LeanPath, a food waste tracking and management company, has found that 4 to 10 percent of food purchased by a foodservice operation is discarded before even reaching the guest.

As food waste continues to pile up across the country, a growing number of restaurants realize they must do more to cut down on the problem. Even the National Restaurant Association ranked food waste reduction and management as the No. 7 trend overall in its 2017 What’s Hot chef survey.

Celebrated chef and author Dan Barber of Blue Hill has led the pack as one of the most vocal advocates of reducing food waste, even launching a pop-up restaurant called wastED that serves meals made from bruised vegetables, odds and ends, leftover pulp, and other discarded food. Now, more chefs have followed suit, stretching their creative abilities to make new uses out of what would otherwise go straight to the trash. Some chefs have even experimented with literally cooking food in trash by slow “roasting” fish, vegetables, eggs, and more inside compost bins with internal temperatures of up to 170 degrees Fahrenheit.

Many chefs have taken to using the stalks, tops, and leaves of vegetables rather than discarding or composting them. Chef/owner Paul Fehribach of Big Jones in Chicago sautés the leaves of ramps for dishes where he’s already pickled the bulbs or used them like onions. Instead of tossing out the woodier bottoms of asparagus, he slow-roasts them for purées and bisques. The heart and stem of cabbage can be cooked down further to draw out the bitterness and make for tastier ingredients in soups and stews. He’s also been known to turn sweet potato skins and scraps into a hash or sweet bisque.

At Grand Traverse Resort in Acme, Michigan, Chef Bryan Petrick finds ways to use the rind of watermelon beyond just the fruit. “After we cut and dice the pink flesh, we take the rind that is usually discarded as trash, and we pickle it by dicing and placing the rind in a pickling liquid of Champagne vinegar, sugar, water, and a pinch of salt for two to three days,” he says. “Then we mix it into a salad with the flesh, some arugula or spring greens, basil, and a reduced balsamic glaze.”

Using the whole animal and cheaper off-cuts help cut down on waste, but a few chefs have even taken to using the skin and other parts of pricier items, like Prosciutto di Parma, in order to use every part and maximize food purchases.

Chef Ryan Hardy of Charlie Bird in New York City uses the skin of the leg paired with pork shank skins for a richer, collagen-laced stock. He also uses a bone saw to cut down the bone from the leg of ham into pieces for this stock, which he then uses to flavor beans or stew greens. Suzette Gresham, of Acquerello in San Francisco, has made everything from prosciutto powder—used to rim cocktail glasses—to prosciutto gelato to candied prosciutto for savory-sweet desserts using skin and other scraps.

Sabrina Tinsley of Osteria La Spiga in Seattle turns the extra fat scraps of the Prosciutto di Parma leg into a lardo-like spread seasoned with salt, pepper, garlic, and rosemary, and this pairs well with crostini and a few drops of super-aged balsamic vinegar. And Dena Marino of MC Kitchen in Miami pushes the end piece of the leg through a meat grinder, turning the result into a filling for pasta or crispy chips for garnishing dishes like cauliflower risotto with scallops.

Arnie Castro, director of culinary operations for Black Bear Diner, doesn’t shy away from using cooked meat the next day. “If we have extra cooked bacon and turkey for the day, we use it for a bacon ranch dressing for our meat lovers omelet,” he says. “Extra turkey used for our hot turkey plate can be sliced and served cold for sandwiches the next day.”

Once reserved for the compost bin or onsite garden, used coffee grounds can be incorporated in a variety of dishes. Chef Roger Waysok at South Water Kitchen at the Kimpton Hotel Monaco in Chicago recycles extra grinds into a rub with chili powder, salt, pepper, oregano, onion powder, sugar, and garlic powder. He uses the rub to season a 10-ounce baseball sirloin sourced from local Slagel Family Farm, then grills and serves the steak with crushed red potatoes mixed with butter and sour cream and braised rainbow chard.

After a busy breakfast or brunch service, Chef Waysok reaches for the leftover pulp from the fresh juices. For his Recycled Citrus Marmalade, he mixes the pulp from juiced golden beets and carrots with oranges, fresh turmeric, apples, sugar, and orange juice and reduces the mixture until thickened. The marmalade pairs with a variety of house-cured meats, pickles, grainy mustard, and whole-wheat baguette slices for a charcuterie board.

Taking the leftover pulp from juiced kale, Waysok has made a jam for his seasonal cheese plate. He cooks down the pulp with more kale leaves and cucumber, spinach, lemon, parsley, pears, apples, honeydew, ginger, apple cider vinegar, orange juice, and sugar.

First it was whole animal, now it’s the whole nut. Chef Nicholas Ciccone at the Metropolitan Museum of Art in New York City creates an infusion by soaking shells in bourbon for a sweeter, nuttier Manhattan cocktail. Chef Adam Moore, who recently joined Bluedog Design, has also used shells with beverages. For cold-brewed smoked walnut soda, he steeps the smoked shells and black tea powder in crushed ice, and then discards the tea and walnut shells before mixing the “tea” with a ginger-spiked simple syrup and soda. He’s also used the shells to add flavor while smoking meats and vegetables in traditional barbecue style.

Paring Down Waste with Prepared Proteins 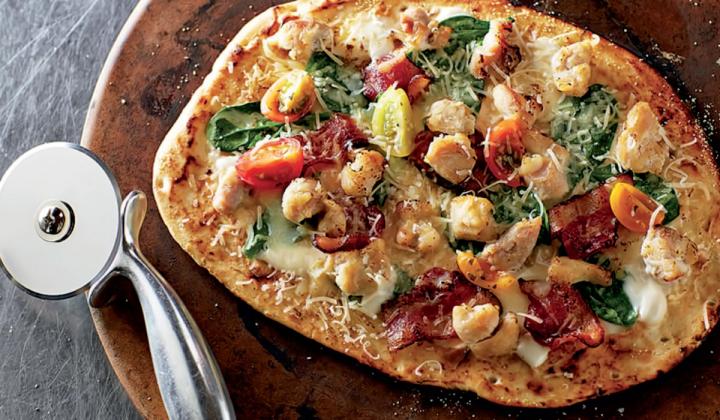 The prepared rough-cut chicken from Tyson Foodservice is a fast and flavorful topping for flatbread.

While many chefs have taken a nose-to-tail approach to maximize the use of the whole animal, others—particularly those in multi-unit operations and casual-dining chains—have experimented with higher quality, pre-prepped proteins. These proteins, which are purchased already in a prepared state, can help chefs “right-size” their food costs and menu items and are ready-to-go as needed.

“With a large majority of ingredient meats being very neutral in flavor, chefs are able to add seasoning and really get creative, putting their own signature touch on dishes,” Lycan says.

As for best practices with prepared proteins: The main consideration for using prepared ingredient meats is setting aside the time and space to thaw frozen products under refrigeration before use. Other than saving on waste, these ingredients offer a clean slate for layering other foods and flavors.