How do you really know what you’re serving?
September 2018 Amanda Baltazar

Chef Robert Wiedmaier is an avid fisherman and has been out on boats with his seafood suppliers. He’s checked out the processing plants in Alaska where much of his fish comes from. He has a top-notch relationship with his fishmonger. He’s even visited their docks to see where the fish comes from, what it looks like, and how it’s labeled.

As a chef, it’s essential that he follows those steps. He makes claims in his restaurant, Siren, in Washington, D.C., about the seafood and its provenance. He doesn’t want to be caught flat-footed or worse, seem to be lying.

But that was the case for many restaurants recently, when they discovered their supplier, Sea to Table, had not necessarily been supplying the local, wild, sustainable, and traceable fish it promised to its customers.

The company was accused of mislabeling, of mixing fish from different origins, providing incorrect names for boats and docks, supplying farmed shellfish instead of wild, and of selling illegal species.

Brian Perkins is the regional director, Americas, with the Marine Stewardship Council in Washington, D.C., and was surprised at the news. “The mislabeling of seafood happens a lot and I was surprised because Sea to Table seemed a good actor—straightforward.” However, he adds, looking at the big picture, it’s not shocking. “There’s so much variability in seafood that almost to deliver local seafood year round is a tough act to accomplish.”

READ MORE: How to get diners excited about sustainable seafood.

He also believes it was possibly unintentional, and points to an Oceana report from 2013 showing that as much as a third of fish is mislabeled. But who mislabeled it, Perkins asks. “Was it the importer who mislabeled it intentionally or unintentionally? I think maybe it ends up being a restauranteur who ends up using a term inappropriately. It’s a lot of work to serve seafood.”

Justin Boevers, program director of FishChoice, a Fort Collins, Colorodo-based company that helps restaurants make sustainable choices, says the more expensive seafood is, the more likely it is to be incorrectly labeled—red snapper and yellowfin tuna, for example.

The trouble is, Wiedmaier says, “you’ll never really know. The fishing industry is not like the USDA, where everything is graded and inspected. There’s a lot of trickery that goes on, even with the names of fish—it’s called different names in different areas.”

So, the most important thing a chef can do is to know his seafood supplier, he says. Wiedmaier has been working with Samuels and Son in Philadelphia and Congressional Seafood in Jessup, Maryland, and has built up trust over the years, he explains. Plus, he makes sure he visits them every year.

"You have to have a supplier with traceability. Having a good supplier is absolutely the key. You need someone who’s going to be honest with you.” — Chef Robert Wiedmaier. 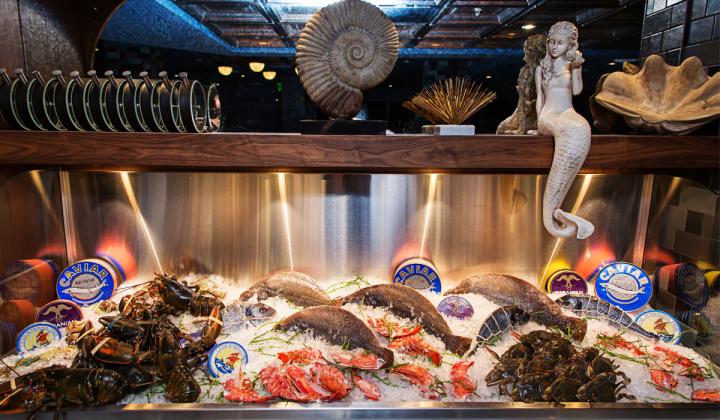 At Siren, in Washington, D.C., Chef Robert Wiedmaier has a top-notch relationship with his fishmonger.

“The more you can get yourself closer to the water with that fish, the closer you can be to your supplier. If you don’t do that, and if you don’t become an investigative reporter, you don’t know sometimes what you are getting,” he says. This means he can ask more questions and ask better questions, he says.

Doug Turbush owns Drift Fish House & Oyster Bar in Marietta, Georgia. “You have to have a supplier with traceability,” he says. “Having a good supplier is absolutely the key. You need someone who’s going to be honest with you.”

Turbush works with the Monterey Bay Aquarium’s Seafood Watch and has worked with Foley Fish in Boston for the past 25 years and is very impressed with the supplier. The company has its own Foley Fish School, to which Turbush sends all of his sous chefs for a three-day intensive session. During this, they learn everything about the company’s seafood, including touring the warehouse, going out on boats, and attending a seafood auction.

Wiedmaier is vigilant about checking the seafood that comes into his restaurant—which is all fresh, never frozen. “We look at every single piece that comes in. It’s very important to look at fish carefully—at the eyes, the gills. As a chef these days, I’m a sourcer.

This is vital, Boevers says. “You should try to buy whole fish because if you’re not seeing the fins and the eyes and the tail you are pretty vulnerable to what someone is telling you it is. Restaurants should be buying a lot more frozen seafood. Part of the problem we are having with this substitution is everyone wants fresh fish and the order takers are trying to deliver. So frozen fish reduces the pressure on the supply chain. So restaurants need to evaluate how much frozen and fresh fish they are buying.”

Another important tactic is to take what’s available without demanding specific fish, he adds. “Michael Cimarusti [co-owner and chef of Providence in Los Angeles] takes what comes in today. That is the model we need to see more of. You have a subscription and don’t necessarily know what you’re going to get that day. But if you have a good chef and some flexibility in the menu, you know you’ll be getting local, fresh fish.”