According to data, 21 percent of Americans eat pizza at least once a month.

Pineapples and Other Pizza Controversies

But still, it’s not pizza.

Of the many Italian dishes that Americans have incorporated into stateside cuisine, none is as beloved—and omnipresent—as the humble pizza pie. A new study by market research firm YouGov finds that a whopping 73 percent of Americans generally eat pizza at least once a month.

But while U.S. consumers may stand united in their passion for pizza they are decidedly at odds when it comes to toppings. In some cases those differing taste preferences boil down to geography; in others, age dictates whether someone is drawn to a particular ingredient or downright repelled. 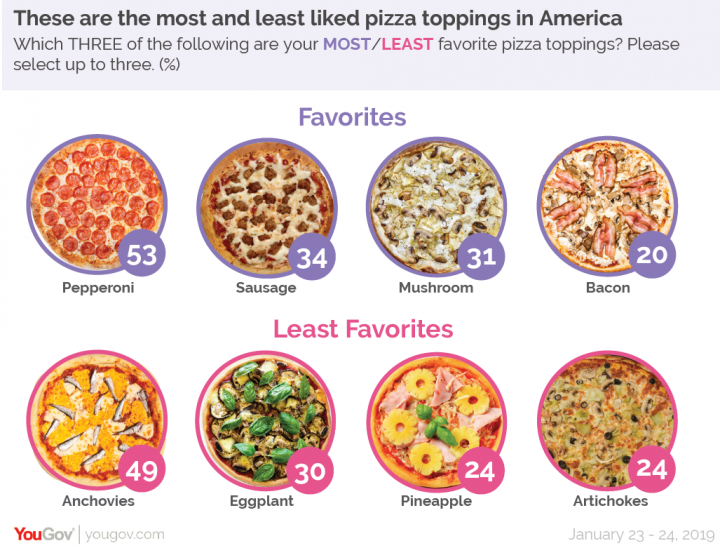 Pineapple, olives, and chicken are the most controversial having both adamant fans and fervent detractors. According to YouGov, 12 percent of Americans who eat pizza consider pineapple to be one of their three favorite toppings, but more than double that amount (24 percent) report it is among their least favorites. Interestingly enough these numbers shift somewhat based on region: 17 percent of West Coasters (including Hawaii residents) include pineapple in their top picks while 29 percent of Northeasterners consider it a least favorite.

Age also plays a part. Fifteen percent of young adults (18–34) favor pineapple, but 28 percent of those 55 or older put it at the bottom of topping choices.

Olives and chicken are more evenly matched when it comes to the enthusiast-critic split. Twelve percent place olives in the favorite ranks while 14 percent put it at the very bottom. For chicken, the fans slightly edge out the opposition at 8 and 6 percent, respectively.

Other ingredients are less divisive. Meats win American hearts: More than half of consumers (53 percent) include pepperoni among their top three; 39 percent pick sausage; and 20 percent choose bacon.

Veggies are a mixed bag. On the positive side, mushrooms are a favorite for nearly one third (31 percent) of American pizza eaters. On the not-so-positive side, artichokes and eggplant land on the least-favorite list for 24 and 30 percent of consumers, respectively.

But none of these—pineapple, artichoke, or eggplant—invites as much derision as anchovies. Nearly half (49 percent) report it’s one of their least favorites and a mere 2 percent rank it among their top picks. Younger consumers aren’t quite as averse though, with only 41 percent naming it as a least favorite.

Interestingly enough, anchovies, which U.S. consumers may consider an affront to the pizza purity, has a long history in Italy. Although the modern pizza as we know it today (often with a marinara base) wasn’t invented until the late 19th century, ancient Romans supped on flatbreads topped with cheese, dates, and, in some cases, fish.

“At the end of the day, some flavors and textures—looking at you, eggplant and artichokes—are simply more pronounced and thus more polarizing than others,” Shannon Missal says.

Nevertheless, restaurants shouldn’t be too gun-shy in experimenting with unorthodox toppings, especially if operators who cater to a younger clientele.

“There will always be someone who wants some of the less traditional ingredients. As such, it’s important to consider whom you’re selling to,” Shannon Missal says. “Younger consumers may gravitate a bit more toward some of the less generally popular toppings, but our data suggest they’re eating a lot more pizza than their older counterparts.”

Indeed, 21 percent of Americans eat pizza at least once a month, per YouGov; that number jumps to 29 percent for 18–34 year olds and plummets to 11 percent for consumers 55 and older. The combination of frequent visits and a greater openness to different ingredients should entice restaurants to take a bit of creative license—so long as they also have the standard pepperoni pizza on the menu, too. 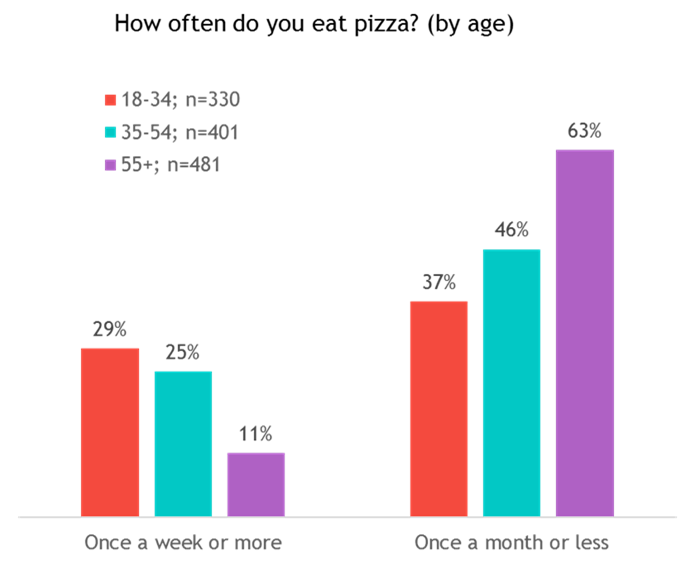