It can be overwhelming to think of costing out your menu. But it pays off.

How to Cost Your Menu for Maximum Profitability

Is your restaurant's menu leaving money on the table?
April 2019 Liz Barrett Foster

Dominic is making good money with the Italian restaurant he opened three years ago in a small town just outside San Diego. People like his food and he’s earning a good living. But a few months ago, Dominic noticed his profits slipping. With a steady stream of customers since day one, Dominic never had the time, or found it necessary, to cost out his menu ingredients. But, now that his numbers are declining, Dominic needs a solution, and fast; if he doesn’t find one, his restaurant is almost certain to close.

The story above is fictional, but the scenario is all too real for the countless restaurants that shutter every year. “People connect too quickly to the emotional side of food instead of the business side when they start a restaurant,” says Glenn Cybuski, a Penngrove, California-based chef, restaurateur, and consultant. “They open a restaurant and sell a ton of product and at the end of the month all the bills are paid. Eventually, they will fail, because, when profits start going away, they won’t know what it’s tied to, whether it’s higher rent, labor, ingredient costs, etc. If you’re not watching the numbers, eventually, you will fail.”

An argument for menu costing

Most operators who don’t cost their menu cite reasons such as not knowing how to or not having enough time, Cybulski says. “Operators contact an expert when they start to see their profits shrink,” he says. “But food costs are the foundation of your business. Are you going to build your house on sand or rock?”

Other operators who have attempted menu costing will often do so when first opening a restaurant and then fail to update it, which doesn’t account for changes along the way. “Around 20 percent of independent restaurant operators have attempted some type of costing, but only around 1 percent have legitimate systems in place to cost their menus and update their costs on the fly,” says John Nessel, president of Restaurant Resource Group in Sandwich, Massachusetts. “Updating means they have a system in place where they can update ingredient prices and the system would flow those changes through to all of the menu items.”

The most popular choice is one where new and existing operators look at the prices of surrounding restaurants and aim to be in line with or in competition with the competitor, Nessel says. 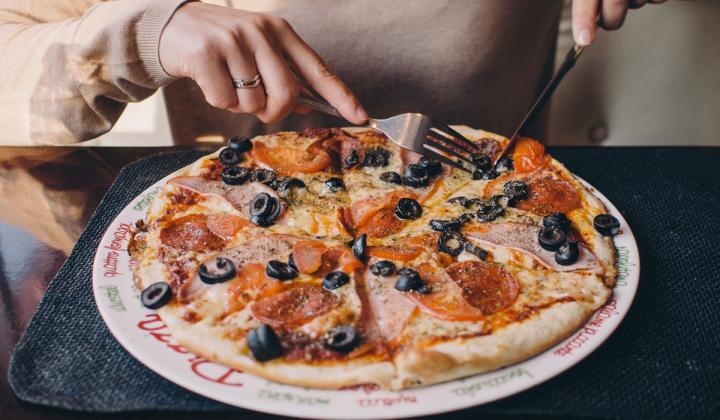 Instead of a comparative approach, try, in addition to menu costing, performing a full menu analysis.

“Most people cost their menus using something I call the comparative approach,” Nessel adds. “They have an idea of what similar restaurants charge for similar items, and then about 80 percent of their decisions will be based on what other restaurants are charging.”

The same operators may look at overall food cost, which doesn’t represent the incremental costs of 50–60 items, Nessel says. “If the food costs are high, they don’t know where it’s coming from,” he says. “They may randomly start increasing prices of menu items to account for the discrepancy.”

Instead of a comparative approach, Nessel suggests that, in addition to menu costing, operators perform a full menu analysis. “A menu analysis will help you understand which items on your menu are producing the most profit, and optimizing your profit,” he says. 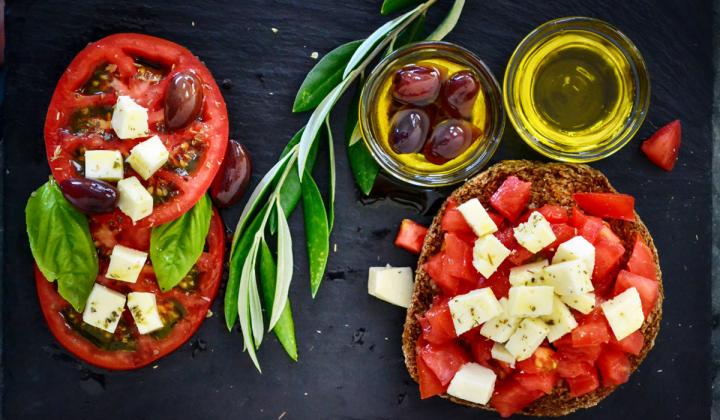 Operators often confuse actual costs with theoretical costs when attempting to balance the books at the end of the month.

Most restaurant owners open a restaurant to cook, not to do math, but the sooner operators dive into plating costs, the faster a restaurant can reach and sustain profitability.

If you’re reading this and can already explain prime cost, you’re in the minority. “Many operators still do not understand prime cost,” Cybulski says. “Your prime cost is the cost of goods sold—ingredients and paper products—combined with your labor. The reason these are prime costs is because these are variable costs that you can control.”

Fixed costs, on the other hand, are costs that you cannot negotiate on a monthly basis, such as rent and utilities, Cybulski says. “If your average prime cost is around 55 percent and fixed costs are around 30 percent, your profits will be around 15 percent, which is pretty good,” says Cybulski.

Operators often confuse actual costs with theoretical costs when attempting to balance the books at the end of the month. “You can’t know whether your actual food cost is good or bad unless you know what it should be,” Nessel says. “The only way to know the theoretical cost is to cost out your menu, to know how many you sell of every item and to do a calculation, which some basic software programs will do.” 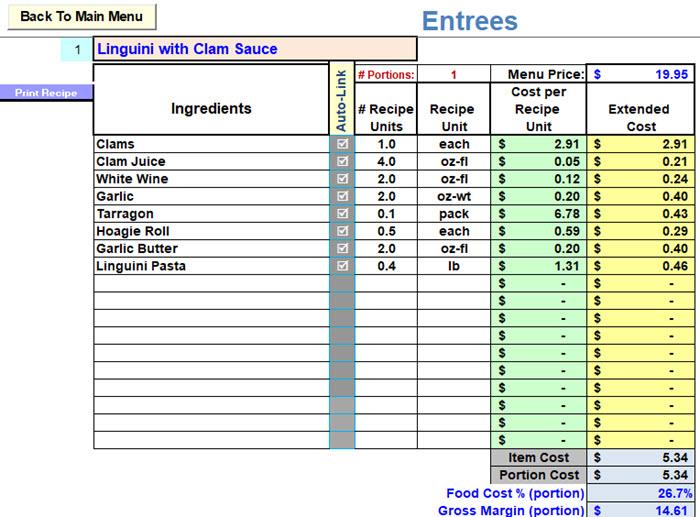 Start with your recipes

Part of understanding food costs is understanding recipe portions. The chef inside any restaurant, especially an Italian restaurant, ultimately wants to deliver consistently delicious food to guests, and food costing will help him do this. “Not only from the customers side, but from the cost side, there’s consistency when you have standardized recipes,” Nessel says.

Cybulski says it often takes a dozen tries before a dish is deemed “perfect.” So, he uses a tried-and-true method to help with consistency and costing. “I start with an excel spreadsheet that lists the ingredients I’m using for a recipe, and then I have several columns that I fill in as I weigh and measure all of the ingredients to go on the plate,” he says. “Then you look at the price and say, based on fixed costs, and based on wanting to stay within a prime cost of around 55 percent, then I can set my menu price based on where it’s supposed to be.”

Cybulski follows the above method for all recipes and uses the results to balance out the menu for profitability. “When you’re balancing your menu, you can have a much higher food cost on a steak plate that includes Italian steak, pasta and salad because you can charge more for it, too. So, the steak plate may cost 42 percent, but your margins are 10 percent higher because you can charge more for it. In turn, the steak plate balances out something like a margherita pizza, where you make massive margins,” he says. 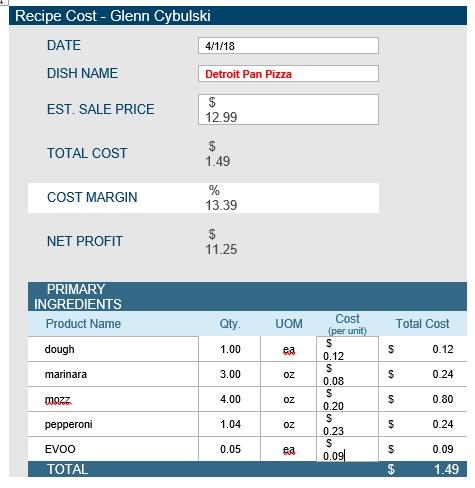 Looking at the Menu Profitability table, we see what a full menu might look like costed out, with columns for portion cost, menu price, food cost percentage and gross margin. 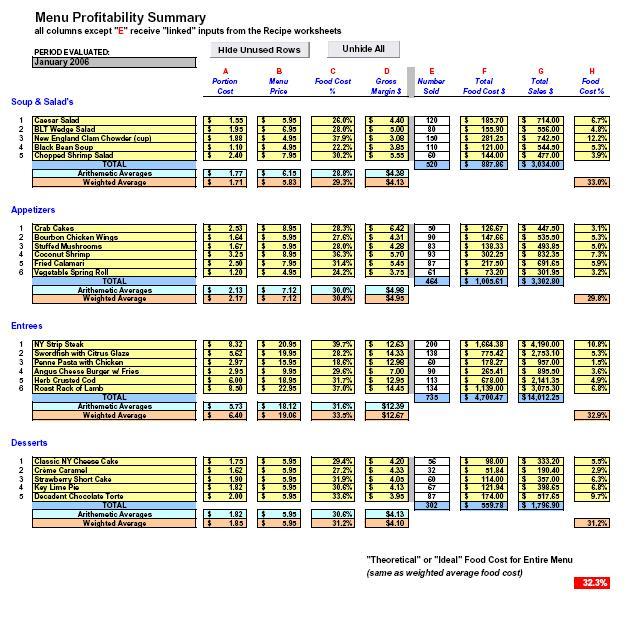 In a traditional Italian restaurant, the food cost may be a bit lower if they’re serving mostly pastas, Nessel says, but each restaurant is a unique business with a unique menu, pricing structure and purchasing. “The only way you’re going to know what a restaurant’s food cost should be is to cost out the menu,” he says.

Cybulski says that many Italian restaurants use high-quality, imported ingredients, which can raise food costs to 35 percent. “I want to know exactly how much my ingredients cost within a variable of a percentage high or low, based on industry standards,” Cybulski says.

Finding hidden money on your menu

It can be overwhelming to think of costing out your menu when you have an extensive list of menu items you’ve been serving for several years. But Cybulski says he can almost guarantee an immediate food cost savings of at least 5 percent after costing a menu.

One eye-opening example is how a pizzeria could save thousands of dollars each year: “Per industry standards, pizza makers use one ounce of dough per inch of pizza with an average dough cost of 2 cents per ounce,” Cybulski says. “So, if an operator realized they were using 30 ounces of dough per dough ball and switched to the standard 18 ounces, they’d save 12 ounces of dough per dough ball, which equals 24 cents per dough ball they’d save. If they sell 200 pizzas per day, it results in a savings of $17,520 per year. Think about this with all your ingredients. How much money are you leaving on the table?”