With the American expansion of high-heat, quick-cooking pizza ovens, it has become increasingly important for chefs and operators to understand the best techniques for making Neapolitan and other types of pizza.

Getting Schooled in the Art of Pizza

The entrepreneurs behind Marra Forni have established a formal culinary school that focuses exclusively on pizza making.
January 2019 Barney Wolf

Pizza seems like it should be such a simple business. Make some dough, add tomato sauce, cheese, and some toppings and spices, and eccolo, you have pizza.

If only it were that easy.

With the American expansion of high-heat, quick-cooking pizza ovens, many of which use a traditional Italian, brick style, it has become increasingly important for chefs and operators to understand the best techniques for making Neapolitan and other types of pizza.

To that end, the Pizza University and Culinary Arts Center was established to provide training and certification for pizzaiolos (pizza makers) at all types of restaurants. And the curriculum isn’t geared just for fine-dining restaurants. Of the more than 67,000 pizza operators across the country, 61 percent, are quick-service units, and the fast-casual segment has grown to 8 percent per market research firm Datassential

The school was launched last year by brothers Enzo and Francesco Marra, the founders and principals of Beltsville, Maryland–based brick-oven company Marra Forni, after it became apparent that the infrastructure was lacking for training pizza professionals in the United States.

“There are hundreds of schools for making pizza in Italy,” says Francesco Marra, the oven company’s chief executive. In fact, just about a year ago Neapolitan pizza making gained UNESCO cultural heritage status. But, as Marra points out, few in the U.S. are taking an institutional approach.

The Marras have partnered on the university with several companies, such as Grande Cheese Co. and Caputo Flour, and are working with several organizations, including VPN Americas, which is the American arm of international Associazione Vera Pizza Napoletana, created by Neapolitan pizzaiolos looking to expand the art of making that type of pizza.

The problem became increasingly apparent a few years ago, as owners, operators, and chefs, many of whom bought Marra Forni ovens or sought guidance from the company, experienced a shortage of skilled labor that understood the intricacies of creating high-quality pizza.

“People think anyone can make a pizza, but not everyone can make a good one,” says Marra, who hails from Naples where pizza was born. “It is in my blood.” After immigrating to the U.S., he was a chef and restaurant owner before starting the equipment company. 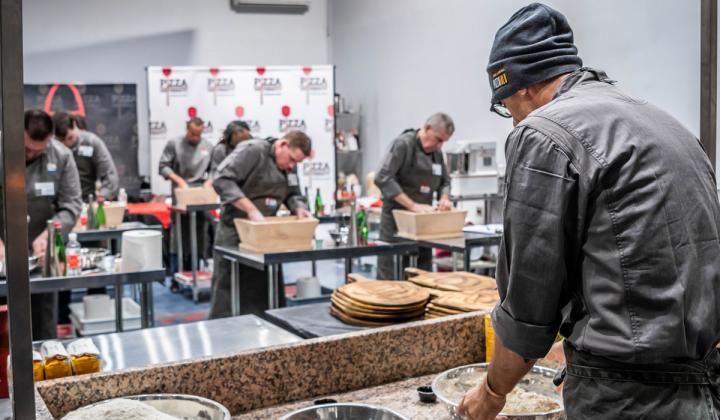 Pizza University has created courses that start with the basics, from how to make excellent dough—including identifying the right type of flour and the impact of hydration levels—to great baking techniques.

Even the baking process is different in a 900-degree brick oven compared to a 550-degree deck version, he notes. And using a Neapolitan-style cooking method doesn’t result in a Neapolitan pizza.

Felice Culucci, Marra Forni’s culinary director, says several of the company’s customers had not worked in the pizza business before buying their ovens and needed help in the pie-making arts, including the right kind of ingredients to use.

“If you grow up in a place and don’t know the real cheeses, the good sauces, the good toppings, it makes a difference,” Culucci says. “Once you taste the best, you can tell the difference.” But quality is not exclusively tied to Italy, he adds, noting that a number of exceptional products are produced stateside.

As a result, Pizza University has created courses that start with the basics, from how to make excellent dough—including identifying the right type of flour and the impact of hydration levels—to great baking techniques, using master pizzaiolos from both Italy and the U.S. Classes include both theoretical textbooks and practical learning, making hundreds of pizzas.

“A structured school is very important,” says Adriani, who, like the Marras and Culucci, is a native of Italy. “There’s been considerable confusion about the pizza-making process.” He adds that it is in part due to the proliferation of different pizza styles and techniques, as well as the expanse of information available through the Internet. 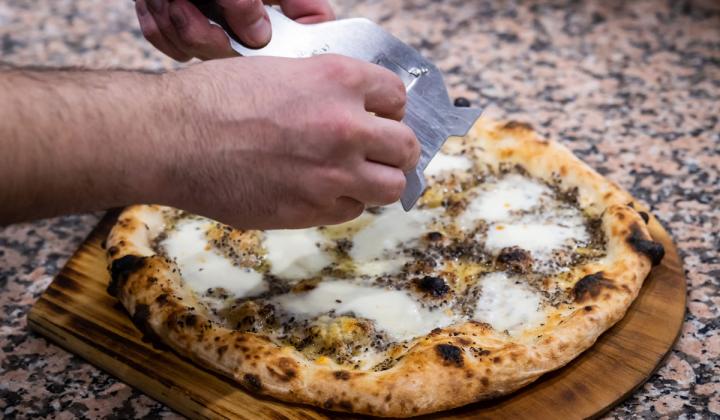 "Pizza is very personal, and the techniques are not expertly defined.” — restaurateur and consultant Giulio Adriani.

“Pizza is very personal, and the techniques are not expertly defined,” Adriani says. “A pizza maker may know about fermentation of dough, for example, but he really doesn’t know what’s behind it most of the time. So, the classes are more about creating a clarity to the wealth of information out there and create a simple way for people to make a consistent product.”

The school hosted its first class—a three-day Neapolitan pizza workshop—last June. There are also one-day sessions for amateurs and five-day sets for professionals. The classes can have up to 12 students with an instructor and one assistant or as many as 15 students with two aides.

While the inaugural class focused on Neapolitan pizza, students also can choose the pizza style they want to study, including Roman and Sicilian. Plans are in the works to hold sessions for other types of pizzas, including gluten-free varieties.

Marra has big hopes for the school and culinary arts center, which is currently housed in part of Marra Forni’s facility but will expand within the space once the oven-maker operation moves to a new facility. In addition to pizza, the center has had classes including cookie and cheese making and olive oil tasting, while more are slated for charcuterie and pasta, among others.

He expects more classes to be held at other facilities, including Mexico and Dubai. One is scheduled for April in Los Angeles focusing on California-style pizzas, and Marra is looking to work with his partners to build additional training programs.