Guests pay $225 each for a dining-in-the-dark experience at Twist in the Mandarin Oriental, Las Vegas.

Inside The Daring World of Multi-Sensory Dining

Dining in the dark is one way restaurants are driving the sensory appeal of food, but sound, art, and setting all influence the discernment of a diner’s palate.
April 2017 Kristine Hansen

At 6:58 p.m. six couples hover nervously outside the windowless Black Hole restaurant in Cancun. There are giggles, witty comments, a whole lot of “what is going to happen next” swimming in the balmy air.

Then, at 7 p.m., it’s time. Two waiters in all-black clothing whip open the doors. In a setting lit only by the glow of a waiter’s white gloves and white mask, the rules are spoken—no cell phones, use quiet voices—before, one by one, couples are guided by the elbow, through the pitch-black dark, to their tables.

What follows is a 27-course meal of bites—an experience that launched in 2014 and costs $120.98 per person—with the idea that when you strip away the ability to see, sensations on the palate go into overdrive and diners become even more acutely aware of sweet, savory, and other sensations. In darkness, the sheen on a bowl of udon noodles takes a back seat to the pasta’s slippery texture, and what presents like puffed-up pieces of bread are—as a surprise to the diner—phyllo pizzas filled with goat cheese and apples. Because guests can’t see what is plated before them, the guessing game starts with the taste—not with their eyes.

Dark dining isn’t just at beach resorts—the trend is moving through Las Vegas, Toronto, and Montréal, too. Faced with an extremely competitive restaurant scene, J.R. Feng, owner of O.NOIR Restaurant in Toronto since 2011, believes in offering something diners can’t easily get anywhere else. But at his restaurant, the idea to eat in the dark also has a socially conscious mission: Most of the waitstaff are visually impaired. “Diners experience what life is like to be blind,” says Feng. “Most people do feel that when the vision is lost, the other senses are [more] intense.”

O.NOIR, which also has a location in Montréal, tends to attract couples, with props to the dim lighting. Feng estimates he serves 300 diners nightly.  With options for a two- or three-course menu, O.NOIR offers a range of entrée choices from chicken breast or filet mignon to a “surprise” meat, seafood, or vegetarian selection. The prix fixe menu in Toronto is priced $32.95 for a two-course meal and $39.95 for a three-course meal.

In nightlife-centric Vegas, the Mandarin Oriental, Las Vegas introduced its five-course “Dining in the Dark” experience two years ago. Held monthly December through March, the series takes advantage of winter’s earlier sunsets. Hosted at Twist by Pierre Gagnaire, the $225 per person cost is comparable to a dinner any other night at the restaurant, says master sommelier Will Costello. By partnering with wineries and wine importers—Costello chooses one for each series—he’s also facilitating chatter about wine.

Turning the lights down so low that the only glow stems from the neon signs along Las Vegas Boulevard—viewable through tall glass windows—guests are encouraged to discuss in small groups the ingredients they taste in each course. “It’s that figurative idea that you have no idea what’s coming,” says Costello, who goes on to explain that this is no normal dinner. Instead, it’s entertainment. Diners receive points—and, ultimately, prizes—for accurately guessing the protein, sauce, and herbs or vegetables.

The winning team receives a bottle of wine. “We wanted to make it interactive,” says Costello, about the communal-dining aspect of the series.

For Barbara Werner, a lifelong foodie with a background as a chef, her “aha” moment came one evening over steak at Ruth’s Chris Steak House in Manhattan. A recent divorcee, she hadn’t yet found her stride for dining alone. On this night, she slipped on headphones and listened to her playlist while she ate. Pavarotti’s “Nessun Dorma” track began as she bit into the steak.

“I was eating steak and mashed potatoes, and it was the best thing I ever had. My whole body was hovering over this thing. I didn’t even put salt on it. All of a sudden, the track changed to Carly Rae Jepsen’s “Call Me Maybe” and it was just done,” explains Werner. She pushed the steak away, no longer finding it appetizing. But her ears perked up.

She started noticing more off-key experiences—and harmonies, too—while dining at the steakhouse. “They played jazz but the wrong kind of jazz—up-tempo, soprano voices—but all their food and beverages land between 11 to 15, and the jazz was six to eight,” says Werner, referring to the numerical scale she devised.

Deep into a two-year journey to study this concept further, Werner approached Fera Medunjanin, sales manager for the steakhouse, with a proposal to host informal musical-pairings dinners in a private room. Intrigued, Medunjanin sat in on the dinners, where diners listened to a playlist through headphones as they ate and discussed after.

“People love this. The biggest turnout we’ve had for our in-house events are these,” she says. About 50 people attend each dinner at the Manhattan location, often learning about it through the website or an email blast.

Werner later brought the concept to 30 Ruth’s Chris locations, including ones in California, New Jersey, and Kentucky. She has also hosted six dinners at Morton’s in Manhattan and has a patent pending on her process.

Additionally, Medunjanin later devised a menu paired with Werner’s music. “Having this aspect of food and music brought the taste to a different level,” Medunjanin says, which surprised her as she had eaten each menu item numerous times and thought she knew the menu in and out. “When you bring out the chocolate molten cake and listen to Coolio’s “Gangster in Paradise,” it brings out the richness in the chocolate,” Werner says. “We’ve had people say, ‘I hate that song but I just can’t stop eating the chocolate cake.’”

In lieu of transforming a restaurant into a new concept, there are other, smaller initiatives that can differentiate the dining experience and entice the guests by creating a sensory appeal. For instance, Sean Curry, executive chef at B inside the Chicago Hilton Oak Brook Hills Resort, was frustrated with the task of creating fresh and simple salads, so he launched “Living Salads” in November.

Diners are handed shears to cut their own lettuce from a living habitat, grown by Living Waters Farm in Champaign, Illinois, and then invited to toss their greens using bamboo tongs and Mason jars. “It’s difficult to come up with the salad you think people will like without manipulating it too much,” he says.

On the night he rolled out Living Salads, Curry sat in the dining room and observed. He watched one server have a 10-minute conversation with a solo diner, something he’d rarely seen. “It poses these questions because it’s so new. I want people to get more interested in where their food comes from.” 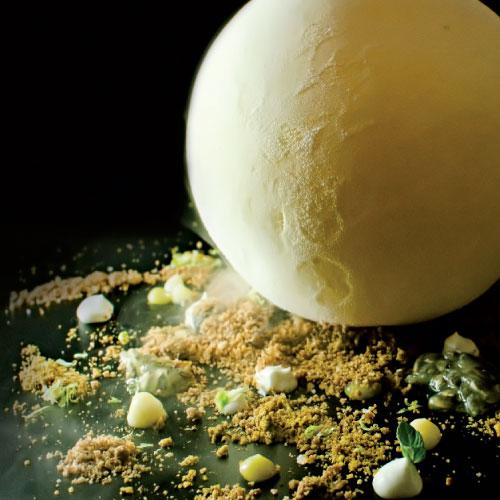 Dining in the Dark

At the all-inclusive beachfront Grand Oasis Sens resort in Cancun, Mexico, the service at Black Hole goes far beyond the expected (cue margaritas and tacos, and a mile-long buffet). Here, guests bite into 27 finger-sized courses—mostly seafood—entirely in the dark, except for a scant few fluorescent lights. There are two seatings nightly, at 7 and 9 p.m. Designed with couples in mind, it has an air of romance throughout the 90-minute meal, including tableside shoulder massages and a white-gloved treatment. (As with most things that are white, the gloves glow in the dark.) Guests dress entirely in dark clothing, as does the waitstaff. After each course, the waiter quizzes guests about what they’ve just eaten, and—while there are no prizes offered—“the big reveal” at the end is a take-home menu detailing each of the 27 culinary rounds. The menu is organized into sections—cocktails, snacks, seafood, meats, pre-desserts, and desserts—with a focus on molecular gastronomy. And the dining experience is augmented with entertainment like juggling acts, singing, acoustic guitar, and magic tricks between the courses. 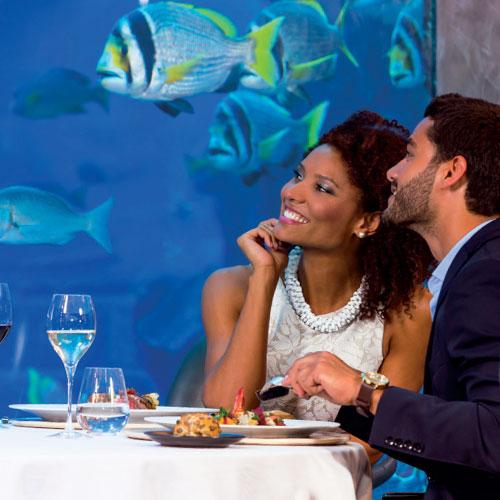 Seafood surrounds, on the plate and at the window, at Ossiano.

Dubai has always been on the cutting edge, like hosting an indoor ski resort, and the dining scene is no exception. At the eight-year-old Ossiano—an upscale seafood eatery—inside Atlantis, The Palm in Dubai, diners sit down to the five-course prix fixe menu (called the “Experience Menu”) in a space that’s entirely underwater. Without leaving their dining chairs, guests can view 65,000 marine animals in the Ambassador Lagoon, making the meal feel more like an aquarium visit—and also giving diners a deeper connection with fish on the menu. Chef Gregoire Berger’s set menu—which changes monthly to reflect seasonal ingredients—is a mix of “land and sea.” There is a signature twist to the menu: Each dish is prepared with Antipodes water from New Zealand. And, at 30 years old, Chef Berger is believed to have won more culinary awards than any other chef in Dubai. On the “Experience Menu” are choices for five courses, such as—for the third course—a foie gras tart, yellowfin tuna ceviche, or octopus carpaccio, each with suggested wine pairings. 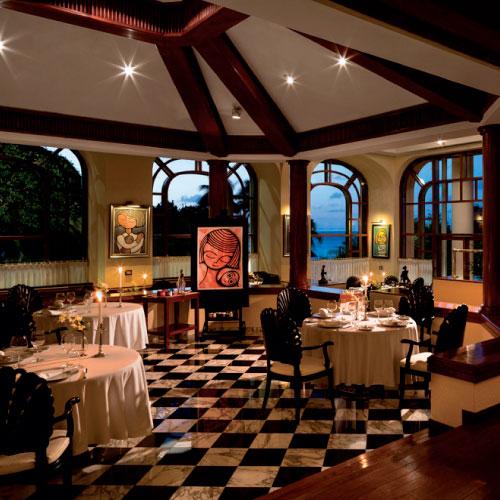 A tableside painter creates works of art alongside guests at Le Basilic.

Evoking the notion that cooking and the presentation of food is just as much an art form as painting, the dining room at Le Basilic—tucked into Fiesta Americana at Grand Coral Beach Cancun—has a riff on tableside preparation of Caesar salad or a flambé station. The experience is far from what guests might expect a Mexican resort to offer—in other words, it’s more Paris than Cancun. The restaurant employs a tableside painter who creates a painting while guests dine, and the diners are encouraged to interact with the painter as they move through their courses. Cuisine focuses on French-Mediterranean influences, with Paris-born Chef Henri Charvet at the helm. Some of the menu’s highlights include foie gras with mushrooms and truffle ravioli, grouper escalope with olive oil, grilled salmon in capers sauce, and the signature “Henri Charvet,” a dark chocolate cake with a mint sauce. There are quite a few vegetarian options, too, such as the “Mes Voyages” salad with wheat semolina grains, chickpeas with cumins, fresh figs, dates, and vegetables.