Tilt's pinball design makes the guest feel like they're in an actual machine.

Inside the Bar that Feels Like a Pinball Machine

Despite not having a pinball machine anywhere in sight, Washington, D.C.'s Tilt takes guests on a nostalgic ride they won't soon forget.
December 2016 Danny Klein

Tilt’s distinction as a pinball bar has plenty of nuance. This isn’t a venue where guests play the nostalgic game with a pint or cocktail fogging up the glass, but rather one where you feel like a steel ball rocketed from one neon attraction to the next. It’s a bar inside a pinball machine, not the other way around.

Jeff Black, the visionary and owner behind the Washington, D.C., venue, which opened in September, even takes it one step further. At this pinball bar, there isn’t an actual pinball machine anywhere in sight.

“I get that a lot,” Black says, laughing. “People ask about that all the time.”

Black’s reasoning? The machines, like his ACDC one at home, are just too noisy. He wants people to talk and still be able to listen. And despite the fact there isn’t a single flipper to be found, those conversations are likely to revolve around the legendary arcade device. The centerpiece theme, which really can be traced back to Black’s childhood in Houston, is a bar top made from pieced-together pinball backglass. There are scenes from Street Fighter, Metallica, Kiss, and the Addams Family, to name a few. All in all, it’s 20 panels constructed by Jeff Dangremond, owner of Atreus Works in Kalamazoo, Michigan.

Three months of trial and error left Black’s house littered with vibrant glass. They couldn’t use displays from actual machines since the materials have been produced very differently over the years. “It took an enormous amount of research to finally come up with this light box concept where they’re basically chopped and put back together as a collage and mounted on [plexiglass] with glass over the top of them,” Black says. 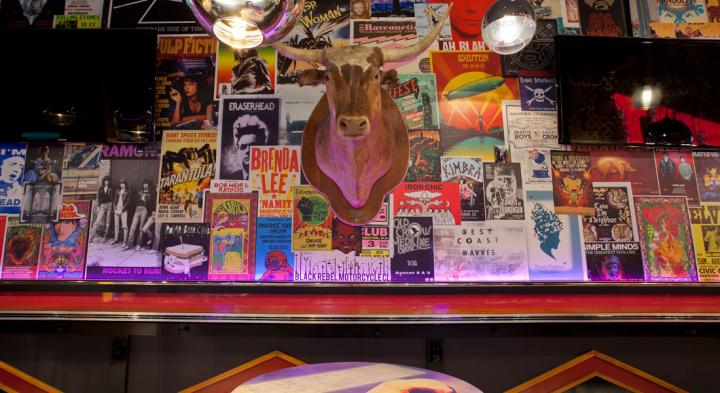 One of the lone holdovers from the old space, a giant steer head, hangs against a wall filled with vintage posters.

The team found someone who pays licensing fees to the original companies and sells repurposed pinball art. That’s when the fun part began. When Black was growing up, he had a neighbor whose father repaired vending machines, including pinball ones. Black would ride over in his bike and spend mornings lost in his the makeshift arcade. For Tilt, he turned back to those memories. “When I was a kid I played the Kiss machine a lot so I asked that by in the mix,” he says. “Also, when I was a kid I was into science fiction and fantasy, so I said you have to have some sci-fi stuff. Certainly, since pinball’s heyday was the 50s, we had to have some stuff from the 50s.”

Attack from Mars, Playboy, X-Men, the list continues. Black’s vision, though, wasn’t going to be restrained to a bar top that seems perfectly suited for an Instagram account. Black wanted to thread this visual interest throughout the space, which was formerly used as a bocce court at his neighboring bar, Black Jack.

Pinball light fixtures are suspended from the ceiling. A fish tank with submerged bumper caps was built into the wall. The cocktail tables are also shaped like bumpers and a feature booth that sits eight has a massive green circular bumper, with a star cut into it, hanging from the center. Even the room itself is more or less shaped like a pinball machine. 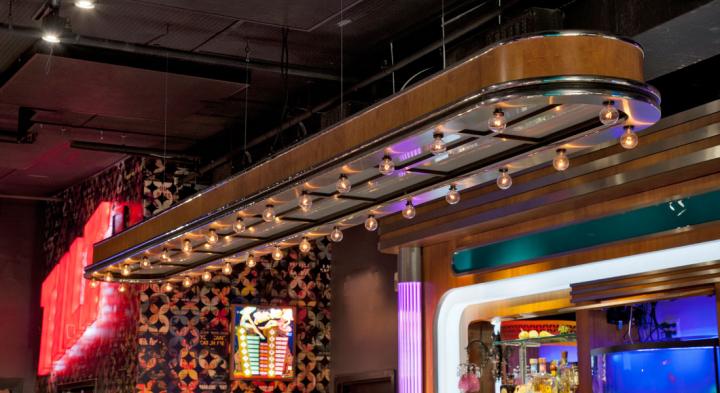 Every detail, including the light fixtures, was meant to create an authentic experience.

On the wall adjacent to the bar, Black stuck up concert posters to surround one of the space’s lone holdovers—a giant steer head—that he acquired from a friend, everything from Pulp Fiction to Neil Diamond to Iggy Pop. Fittingly, classic rock sets the soundtrack.

“It got very graphic,” Black said. “I don’t think it’s like any other bar I’ve ever been in. It’s funky and there are a million things to look at.”

The bar serves more than just a flashy purpose. Black, who has been an operator in the area since 1995, operates nine concepts under his Black Restaurant Group umbrella. He wanted to create a space that alleviated some of the bustle from Black Jack, where guests need to carve out a solid 20 minutes just to find the bathroom on busy nights. 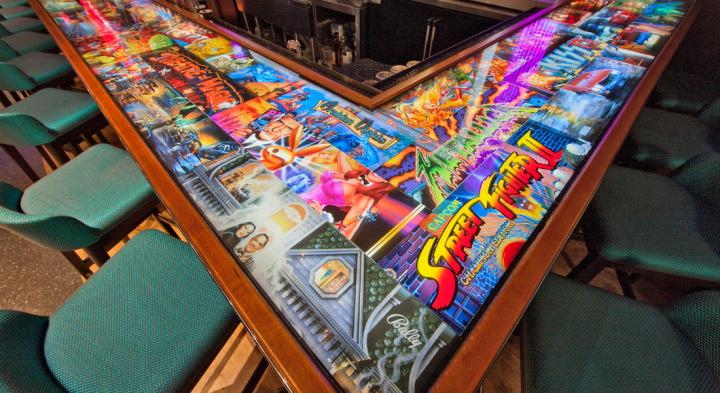 “We tried to create a place where we can be a little more in control of it,” he says. “And we wanted it to have it’s own vibe, it’s own energy. This all just kind of happened organically.”

The food is a mashup from past experiences. Chef Austin Ginsberg crafted seven dishes for the concept cherry picked, in some ways, from other restaurants in the group, including jerk chicken, which they made for parties “eons ago.” There’s also lobster Rangoon and a vegan burger inspired by his son, who adheres to the diet.

“All of it was steered through this idea of doing something a little bit offbeat,” Black says. “A little spicy and not real passive. Tilt is not a passive space. The same thing is true with the cocktails.”

When making cocktails, like food, Black follows a strict rule: No matter how creative or innovative a concoction might be, if he wouldn’t order it twice, Black won’t serve it. Two examples created by mixologist George Sault are: the PNBL WZRD—Peanut Butter Washed Deep Eddy Vodka, Lemon, Zinfandel, and the Pin Head— Haymans Old Tom Gin, Cocchi Rosa, Maraschino, and orange bitters.

“This place is pretty different,” Black says, “which is exactly what we were going for.”