Glass & Vine in coconut Grove, Florida, is likened to a modern, subtropical version of Central Park’s Tavern on the Green in New York City.

Florida's Subtropical Version of Tavern on the Green

With temperate weather mostly year-round in South Florida, relying on the outdoors made sense for restaurant Glass & Vine.

Opened in March of 2016, the concept is located on the grounds of Peacock Park in Coconut Grove, giving diners an experience that the restaurant likens to a modern, subtropical version of Central Park’s Tavern on the Green. Partnering with New York City’s Celano Design Studio, Glass & Vine uses its outdoor surroundings as inspiration for its interior, which contains a vine-covered roof with skylights and floor-to-ceiling-glass sliding doors. The setting’s natural color palette is accented with varying hues of green and orange.

Bringing additional color to the restaurant is Chef Giorgio Rapicavoli, who by the age of 30 had become a Food Network “Chopped” champion, a James Beard Award semifinalist, and a rising star on Forbes’ “30 Under 30” list. Chef Rapicavoli, now 31, creates a menu split into three categories: garden, sea, and land.

Rather than turning to a mixologist when creating a new cocktail program, the restaurant turned to Rapicavoli, who relies on his culinary pantry of items like ginger, carrots, citrus, and freshly squeezed juices to create eight cocktails.

“I have always loved making cocktails; to me it’s just like cooking: good ingredients combined properly to make something delicious,” he says. “I feel it’s integral for chefs to be involved in the cocktail program.”

Rapicavoli says he doesn’t aim to pair certain drinks with dishes because one cocktail usually lasts longer than a plate on the table. Instead, he aims to create dishes and drinks that reflect each other with “vibrant acidity, fresh herbs, and great ingredients.” His creations include drinks like the Magic School Bus, with cachaça, aperol, and salted passion fruit purée; the Commodore Sour, with rye whiskey, yuzu, soy, and rice vinegar; and the local honey shandy, which combines a Florida wheat beer with China-China liqueur and honey. 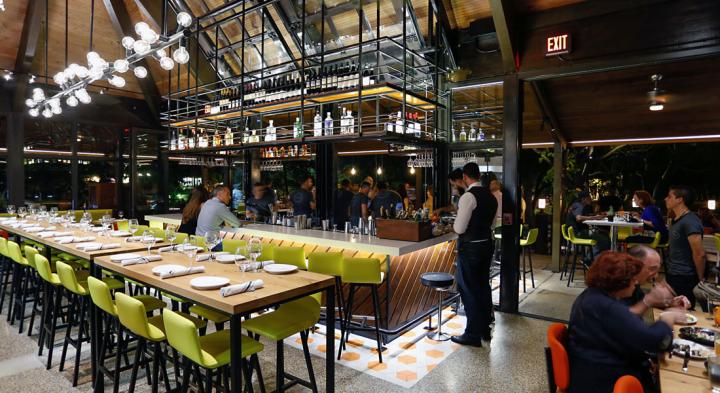 Aside from introducing the drink program, Glass & Vine has also evolved its food since the opening, with Rapicavoli introducing a seasonal menu to coincide with the new cocktails, and also beginning lunch and brunch service.

“We change the menu based on the national seasons as we just really have summer here in Miami,” Rapicavoli says. “Since it is a little cooler (in winter), we tend to lean toward lots of root vegetables and citrus. Come March and April, the menu will be centered around more green vegetables like peas and asparagus.”

Garden offerings on the menu fit the lush environment, with items like watermelon salad, with crema, Cotija cheese, toasted corn, and cilantro, and Florida Stracciatella, made with California olive oil, local bread, and garlic confit. The restaurant also offers a happy hour on weekdays from 4 p.m. to 7 p.m., where guests can get $4 snacks like marinated olives or cured meat, or $7 small bites, including sweet potatoes with Huancaína sauce, Queso Blanco, lime, and cured egg yolk, to go with the cocktails, priced $8.

For the seafood portion of the menu, Rapicavoli relies on fresh Florida catches in dishes like conch fritters with citrus, yogurt, celery, and jalapeño, and the local fish “AguaChile,” an ocean-raised farmed Atlantic salmon, which is served with carrots, passion fruit, and Florida citrus. But the land offerings aren’t just an afterthought, either, as Rapicavoli creates depth and contrast in dishes like the grilled sweetbreads with celery root, celery chimichurri, and onion ash, or the grilled duck breast with carrots, carrot purée, and smoked carrot juice.

The restaurant seats 200, with a 24-seat bar as a focal point. Via the outdoor seating, which Rapicavoli says is in particularly high demand during the colder months, guests can take in the surrounding park’s foliage. And when the weather warms up in the summer, Glass & Vine deploys Tuuci umbrellas and an air-circulation system to assist with the flow of the bay’s breezes throughout the restaurant.

“People really just love being around the lush foliage of the park, so we made sure to have lots of open windows and a bar that can be both indoor and outdoor,” Rapicavoli says. “Coconut Grove has such a close history and connection with the land that it only makes sense to create an environment where people can just lay back, relax, and enjoy some of South Florida’s most beautiful scenery.”

Glass & Vine is part of the Grove Bay Hospitality Group, led by restaurateurs Francesco Balli and Ignacio Garcia-Menocal, who plan to continue introducing new concepts in Dade County’s oldest neighborhood as part of what will be a 7-acre property called The Harbour, created with a 50-year lease with the City of Miami.