The Chef’s Line All Natural Fire Grilled Chicken Breast has been a hit so far.

US Foods Rolls Out Product Lineup for Millennials

This year's Spring Scoop looks to meet the demand of the largest consumer base in the country.
March 2017 Danny Klein

A lot has changed since US Foods launched its first Scoop product lineup in 2011. And not just across the industry, but around the roundtable at the growing company as well.

Stacie Sopinka, vice president of product development and innovation, estimates that nearly two-thirds of her current team are millennials, a much-examined demographic that essentially refers to anybody who reached adulthood in the early 2000s.

This has turned out to be a case of perfect timing.

The distributor’s latest Spring Scoop is targeted at that massive swath of consumers, a group the U.S. Census Bureau says numbers 75.4 million strong in the U.S., more than the current population of Baby Boomers (74.9 million). It’s deeper than just sheer size as well. In foodservice, Sopinka says, studies show millennials spend 44 percent of their food spend eating out, and fork up $174 a month compared to $153 for other generations.

“It’s a very impressive number,” she says. “I think the other stat that I always find interesting is that 87 percent of millennials will splurge on a nice meal even when money is tight. They prioritize it. And they eat out more often and they deal with home delivery differently.”

If one thing has stayed consistent through US Foods’ Scoop lineups, however, it is the drive to meet trends head on. When it came time to discuss the millennial-targeted approach, US Foods listened to the customers and employees who understand this movement the best.

The first was global cuisine. According to research from Mintel, nearly half of millennial diners are seeking out ethnic flavors. At first, Sopinka was a bit weary about trying to tackle this because she didn’t know if the market would respond favorably.

“It’s [actually] doing very well. There is obviously an unmet need for this type of product,” she says. “People recognize they want to add this and they want to have authenticity, so we went to a lot of pains to make sure this was as simple and as authentic as possible.”

US Foods is offering Pacific Jade Indian Curry and Thai Red Curry Sauce Starters, which can work as a sauce, soup or marinade. There’s also the Chef’s Line All Natural Chicken Shawarma.

With the curry, even a restaurateur with no experience in global cuisine can menu an authentic product. All they have to do is finish it with heavy cream or coconut milk and add their choice of produce or protein—or both.

“It’s very simplistic and it basically removes all the anxiety around which ingredients to bring in and how to prepare it because it’s very simple to make,” Sopinka says.

Next up was what US Foods refers to as the Real Deal. They addressed this in last year’s Scoop lineup—the Serve Good line—which focused on responsibly sourced items that would contribute to waste reduction. Sopinka says the plan in 2017 was to build on the trend and earlier rollout, which was met with overwhelmingly positive feedback.

The Hartman Group says 65 percent of millennials enjoy foods that are natural or organic. US Foods' response is the Chef’s Line All Natural Fire Grilled Chicken Breast and White and Dark Turkey Burgers. They’re vegetarian-fed and raised without antibiotics.

The Chicken Breast product, Sopinka says, has really struck a chord so far. It’s a fully cooked, 6-ounce breast prepared sous vide, and comes three to a vacuum-sealed bag. The clincher: it has a shelf life of 70 days.

Sopinka relays an anecdote from a small coffee shop. “This completely changed their menu because they had very limited cooking abilities and equipment, and this gave them the ability to sell chicken on their menu. And they had all of sudden opened all sorts of opportunities because they could include this product. They were avoiding chicken for food safety and also the food prep involved, which was beyond the scope of what their kitchen could do.” 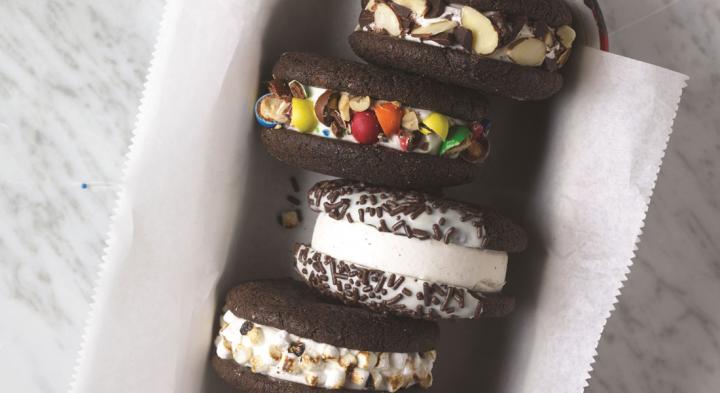 Dessert on the go with the Glenview Farms Tahitian Vanilla Ice Cream Puck.

The third note was on-the-go eating. Millennials are often characterized as a group who prefers to graze throughout the day, instead of sitting down to a three-course meal. The New Ideas and Trends in Food Service report shows that 70 percent of millennials purchase grab-and-go sandwiches, meaning restaurants have a great chance to boost profit by offering portable dishes.

For sandwiches, UF Foods is presenting Chef’s Line Aged Cheddar and Onion Bialys, and Beef & Truffle Patties from butcher Pat LaFrieda. There’s even dessert on the go with the Devonshire Black Velvet Cookie, which can be eaten on its own or filled with the Glenview Farms Tahitian Vanilla Ice Cream Puck.

“Obviously home delivery is a big area where millennials are moving the needle on foodservice,” she says. “Seventy percent of them have bought grab-and-go within the last week and 74 percent said that in a traditional restaurant if there’s home delivery available they will take advantage of it.”

Lastly, US Foods rolled out its New Menu Design Capabilities. The US Foods Menu is designed to help restaurateurs curate top-quality menus that highlight key dishes and engage guests.

Sopinka points to an OpenTable stat saying 86 percent of diners now browse menus online before they dine out. Ask that question again in five years and it might be 99 percent.

Millennials spend 44 percent of their food spend eating out, and fork up $174 a month compared to $153 for other generations.

In addition, statistics show 44 percent of millennials have taken or posted food or beverage pictures online.

“We designed menu engineering and menu design,” she says. “That way, we make the menus both beautiful and profitable. There is a lot of science behind how our menu is designed. We’ve had a lot of very positive testimonials as we attempt to make it as simple for our customers as possible, and extremely affordable as well. … I think the significance when you think of digital is that historically people used to use the menu prior to digital to figure out what offering they wanted to eat out of the assortment. But now, with the percentage of people who browse menus online, the reality is people are not only choosing what they want to eat, but where they want to eat.”

In early feedback, Sopinka says the millennial-centered Scoop lineup has generated more excitement than any product reveal so far.

“I think it’s very accessible. Everybody can relate to it,” she says. “And restaurants are watching what’s happening in the industry and there’s a realization that doing what you do now will not lead to success 10 years from now. You definitely have to address this change in behavior that the millennials are driving.”