Metro Diner will put so much food on the plate you'll need to bring some home.

The Breakfast Wars Heat Up for Full-Service Restaurants

It's not all about on-the-go anymore.
November 2018 Gary M. Stern

Breakfast used to be an afterthought at most full-service eateries, but no longer. Now a number of restaurant chains specializing in breakfast such as First Watch, Black Bear Diner, and Metro Diner are showing steady growth and intensifying the competition against long-standing rivals like IHOP and Denny’s.

As more Americans work independently and crave in-person companionship away from their smartphone screens, full-service breakfast business is on the upswing. Will the long-standing chains hold off the competition from fast-growing rivals, who are expanding at a rapid pace?

Moreover, a 2017 study on breakfast consumption saw dining out rise in every segment, including full-service restaurants, fast casual, and quick-service eateries. It pointed out that “younger consumers spend more at breakfast than their older counterparts,” and that average breakfast checks are $13 for breakfast at full-service eateries and almost $10 at fast-casual spots.

The larger chains that offer breakfast have seen modest growth or slight slowdowns, including IHOP, which saw its domestic same-store sales increase 1 percent in the first nine months of 2018. System-wide comps lifted 1 percent during third quarter at Denny’s. For the fiscal 2018 calendar, traffic fell 1.9 percent and comps increased 0.6 percent at Cracker Barrel.

Metro Diner, and the making of America's next great diner chain

IHOP is more than just a breakfast destination

Inside Cracker Barrel's plan to win back guests

Significant growth came, especially in regards to unit count, from the emerging sector. Because of their expansion and the whitespace compared to legacy chains, the upstarts have scaled at a faster pace than the more mature, established chains.

Consumers are dining out at breakfast more because of their busy at-home schedules. As a culture or society, life is not getting less stressful or slower. There’s less time spent at the stove cooking,” says Matthew Britt, a chef and culinary instructor at Johnson & Wales University in Providence, Rhode Island.

Since consumers can dine out at a reasonable price at IHOP, Denny’s or First Watch, they say, “It’s worth my time to dine out,” Britt adds.

From a business viewpoint, chain restaurants can turn a profit because they buy eggs in volume, which brings their food costs down, and can turn a healthy profit, Britt says.

In teaching breakfast to culinary students, Britt trains them to “understand classic techniques about how to make an omelet and the variety of an egg. We make pancakes and sausage as separate components, and then combine them, into your own McGriddle.” They’re also encouraged to prepare innovative items such as cauliflower dishes and porridges. 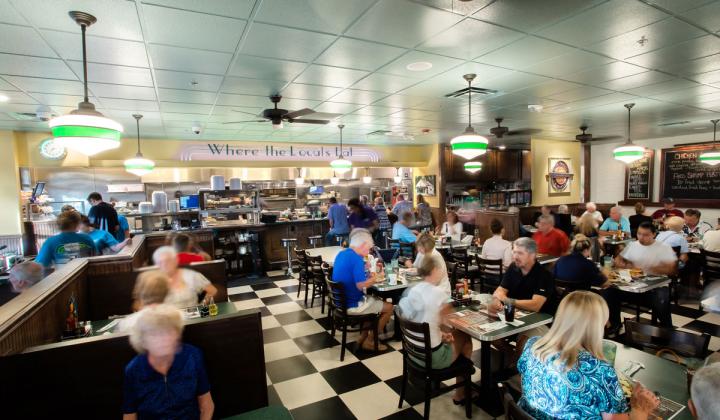 The rise in dining out for breakfast contributed to the formation of Metro Diner, which offers comfort food at every meal and has struck a chord at breakfast time. Yelp aficionados praise its “unique pound cake French Toast” and noted the “long wait, which is worth it.” That kind of reaction has contributed to Metro Diner’s rapid growth to 60 locations (58 company-owned) in four years with 25 new outlets planned for 2019.

Hugh Connerty, co-chairman of Metro Diner and founder of Hooter’s and partner in Outback Steakhouse, attributes the spike in dining out breakfast at full-service eateries to “the changing dynamics of society. People aren’t about ducking in and grabbing a McMuffin’s on the road anymore,” he says. Many breakfast customers aren’t tied to 9-to-5 jobs and are operating in creative-style freelancing jobs.

Connerty says that there are shifting crowds most weekdays at a Metro Diner. The 7 a.m. crowd attracts working people like construction workers, and then starting around 9 a.m. it draws more diners with a “leisurely lifestyle or for business meetings,” who congregate in groups of four to six people, he says.

On weekends, the crowds line up and mostly consist of friends and family, not business-related, he says.

Hearty breakfasts prevail at Metro Diner as well. Fried chicken and waffles is the No. 1 seller, with egg dishes close behind. “You can’t eat what we put in front of you, and almost everyone takes food to go,” Connerty says. But for the health conscious, there’s avocado toast, fruit, and egg-white omelets.

Metro Diner’s concept of strong service, healthy portions, and comfort food appeals to a wide audience, ranging from retirement communities at the Villages in Florida and with millennials and college students in Gainesville, near the University of Florida.

But forthright Connerty reveals that it hasn’t clicked with one audience: kids. “You see a few kids at Metro Diner, but most parents take their kids to McDonald’s or Chick-fil-A. We consider ourselves a family restaurant, but it’s been a challenge,” he says.

"People aren’t about ducking in and grabbing a McMuffin’s on the road anymore." — Hugh Connerty, co-chairman of Metro Diner. 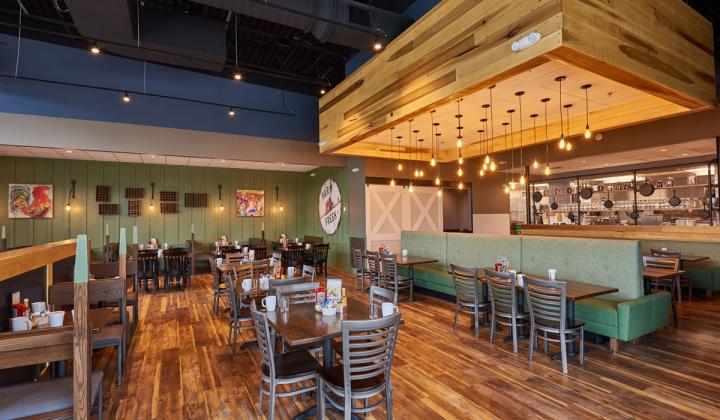 The more the media promotes the value of breakfast. the more it can grow, says First Watch president Chris Tomasso.

First Watch, which is only open for breakfast and lunch and closes at 2:30 p.m., now has 283 eateries, and will have opened 57 new stores in 2018. Its president, Chris Tomasso, who is based in University Park, Florida, says offering two meals a day enables it to be a specialist. “We’re not trying to be all things to all people,” he says, adding that it can attract better talent because they won’t have to work late.

The number of people dining out at breakfast is still proliferating because of power breakfasts, Tomasso says. “It’s easier to meet someone for breakfast than break out of your day,” he says. Hence he sees realtors, pharmaceutical reps, and financial advisers meeting with clients over breakfast.

Buoyed by private-equity money, all of its new eateries are company-owned, and it no longer franchises.”The ROI is better for us to own,” Tomasso says.

Growing rapidly has its traps, and other franchises have shot themselves in the foot by expanding too rapidly. Tomasso says it has increased spending on people development and career planning and has invited 400 managers for leadership training to avoid “dilution of culture, dilution of procedures, and dilution of core values.”

Tomasso expects growth for dining out breakfast to continue to spike. “The more the media promotes the value of breakfast,” the more it can grow, he cited. And many people still haven’t adopted breakfast as a meal occasion.

Chef Britt expects that dining out breakfast at full-service eateries “will continue to grow. More and more people are becoming passionate about dining out breakfast, and more are finding healthier alternatives. They’ll need more places that serve people who are busy and on the go,” he says.