Students in chef Peter Greweling’s Chocolate and Confectionery Technology and Techniques class, along with those in Deirdre Murphy’s Ecology of Food course, collect sap from the school’s maple trees to make maple syrup.

Culinary School: The Next Generation

Blogging, tapping maple trees, fermentation: These are skills yesterday’s culinary grads likely didn’t pick up in school, but today’s are. A shiny new culinary education goes beyond techy and trendy, and at the Culinary Institute of America it goes beyond the traditional associate’s degree into bachelor’s degree territory, too. New courses and programs prepare future chefs and restaurateurs for food styling and Instagram while they’re learning hands-on how to run a restaurant from concept to commercial viability.

Days start early for culinary students—that much remains the same. Kelsey Vogt, a 19-year-old senior majoring in food business management, begins her days at 7:45 a.m. She’s working in the business program’s innovation kitchen preparing a restaurant she’ll run next semester, a concept called Good Pho You, that will be installed in a rotating position in the student dining hall.

Meanwhile, Ray Delucci spends his day with local farmers at the CIA’s California campus in wine country, where the farm-to-table grogram lives. Delucci, 20, is president of the CIA’s student government association. He’s not only learning about sustainable food sourcing hands-on, but he and other students also have worked to make sustainability more of a reality on campus. 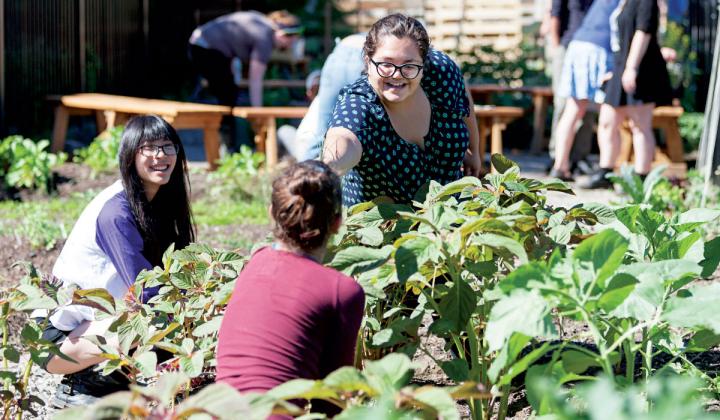 It’s cross-curriculum experiences like these that are giving today’s culinary students both theoretical and experiential learning that prepares them for a whole new world of food business.

Restaurant operators know that more and more, diners care about where and how their food was sourced. That point is not missed in today’s culinary education. At the CIA, bachelor’s students can specialize in food policy in the School of Liberal Arts and Food Studies, which verses them in the societal and political landscape of food.

“In the kitchens, they get exposed to general ideas like sustainability, different food products, and different techniques,” says Denise Bauer, dean of the School of Liberal Arts and Food Studies. “In the food studies program, they really start looking at the contemporary issues, and in particular their history. If we want to talk about sourcing locally, what does that look like, what do our practices look like, and how do we define local?”

It’s in the food studies program that students might find a specialization in food education or food writing. Students can participate in the campus blog or the school newspaper and can write about events on campus, such as the tapping of the maple trees and the arrival of bees to the new apiary. 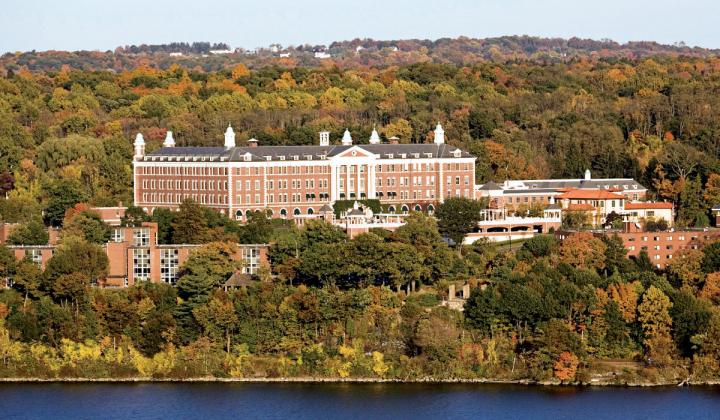 “One of things I’ve seen change over time is the kind of student body coming here that you see in other schools; they’re committed to making a contribution to the social good, and they want to do something more,” Bauer says.

Delucci and Vogt alike exemplify this change. When Vogt started school at the CIA’s California campus, she set out with the goal of opening a small farm-to-table restaurant. But her experience in the business program changed that.

“The whole reason I started cooking in the first place was for the environment,” she says. “All I wanted was a little tiny restaurant that does things right. But then I came here and a lot of our classes are corporate-focused and big business–focused. I realized how much of an impact those businesses have, and so if I’m cooking because I want to make an impact, I should go somewhere that lets me do more.”

Meanwhile, in student government, Delucci has worked to get a community garden approved that will allow all students—not just those in the farm-to-table course—to participate in hyperlocal food sourcing. 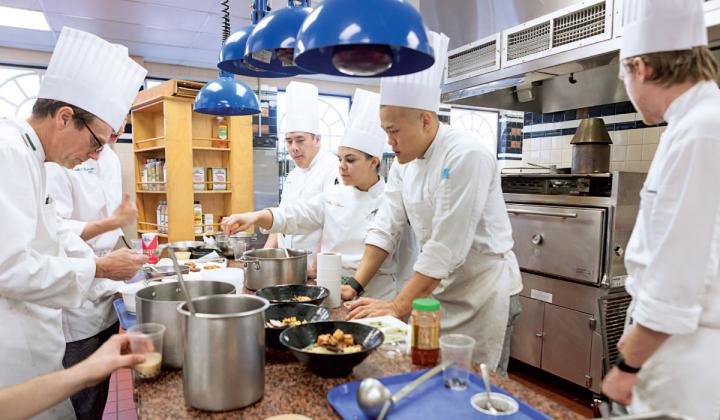 The Menu Development and Testing course is the final step before students bring their fast-casual concept to the student dining hall.

When Vogt’s Vietnamese restaurant concept takes up residence in the student dining hall, known as The Egg, it will neighbor one of the existing contract-run foodservice stations called The Line. The CIA contracts with Restaurant Associates to collaboratively fill this space. Through The Line, the CIA has brought sustainable food sourcing into its own foodservice operation, and students learn from that, too.

The menu at The Line is more plant-forward. Burgers are blended with whole grains. Seafood is sourced according to sustainability guidelines. Vegan items are featured on the menu. It’s a menu that provides options for varying dietary preferences and allergies.

“Nowadays the focus is on food systems like never before,” says Bruce Mattel, senior associate dean of culinary arts. “Years ago, chefs wouldn’t worry so much about where their food was coming from. Now you can’t escape that you have a responsibility, and we’re preparing our students to assume that responsibility and recognize what they do has far-reaching implications.”

Students like Delucci and his colleagues in student government have already started implementing these lessons, Mattel says. The student government has committees to review food waste, sustainability, and the curriculum as a whole. Students specializing in business are required to think about sourcing sustainably when pitching concepts, like Vogt’s pho concept. In the CIA’s business school, culinary students aren’t just learning how to do business—they’re learning how to do it better.

Bill Guilfoyle, an associate professor in the CIA’s business school, is quick to point out that the school still has its share of fine-dining chefs who want to go out and work for the most prestigious restaurants in the country. But many more may be seeking something even more coveted in the food industry: a work-life balance. Whether that means cafeteria foodservice, corporate recipe development, food policy, or culinary science, culinary students are finding that a variety of careers are available for their skill sets. And that’s intentional.

“We work hard to expose students to all the many tracks and potential career paths in this really great and vibrant industry,” says Annette Graham, dean of the School of Business and Management Studies. “It’s really been eye opening to students.”

It sure is different than when Graham went through the CIA, she says. After her culinary education, she decided she was a good chef but saw her career elsewhere.

“I made the decision pretty quickly that I was going to get educated and follow a career path in education,” she says. “Now, I may have made a different decision because it is a more welcoming environment for women to go and do different things.”

And in that way, the student body has changed as well—not just in skills, but in diversity, too. Up until 10 years ago, for example, Guilfoyle rarely saw female students volunteer for general manager positions at the senior class annual charity dinner.

“We’ve really seen that not only the males are accepting that, but also when you ask for volunteers, more females volunteer,” he says.

As proof, Vogt leads a team of a handful of men and a larger handful of women in a menu development and testing course as they prepare their final menu test for Good Pho You. Vogt is a quiet but firm leader. When the team gets off track, riffing on a recipe they didn’t like, she brings them back to focus. It’s in these moments the students are performing tasks, collaborating, testing boundaries, failing, and learning again lessons they’ll take into the business with them.

Initially, Vogt pitched Good Pho You as just soup—a fully pho concept. But she and her team—the rest of the class—quickly learned that the business wouldn’t be profitable just making soup. It evolved from there to a broader Vietnamese concept that ultimately includes bahn mi, cold noodle salads, marinated and grilled meats, and a slew of desserts.

“You’ve got to make money,” says Mark Ainsworth, a culinary arts professor leading Vogt’s menu development and testing course. “We can make anything great, that’s easy. That’s what we do, and we do it to the gold standard. And then we calculate the food cost and it’s 40 percent. We can’t charge $20 for a bowl of soup.”

The pho broth took Vogt’s team the whole semester to nail down, and the lesson was unexpected, she says.

“We’re very accustomed here at school to cooking because it tastes good, and now we have to cook because it sells and makes a profit,” Vogt says. “It’s definitely a major change of pace.”