Unscripted opened its flagship location in Durham, North Carolina, recently with 74 guest rooms and suites, five food and beverage venues including a rooftop pool deck and lounge, and three restaurants at street level.

The recently launched hotel line aims to adapt to each location while building relationships with its community.
July 24, 2017 Alex Dixon

As boutique hotels pop up across the country, the line is often blurred between the hotel guests and those from local communities enjoying the experience. New hotel brand Unscripted is no exception.

Launched by New York City-based Dream Hotel Group, the hotel line aims to adapt to each location in which it opens while building relationships with businesses within that city, including restaurants, distilleries, and breweries.

Unscripted opened its flagship location in Durham, North Carolina, recently with 74 guest rooms and suites, five food and beverage venues including a rooftop pool deck and lounge, and three restaurants at street level. The brand eventually plans to expand the concept to other markets, including Phoenix, Arizona, and Austin, Texas.

Programming events like Friday night swims and painting classes open the experience up to the community, and the hotel launched with a promotion for locals to enjoy 10 percent off room bookings, as well as complimentary drinks and bike rentals. 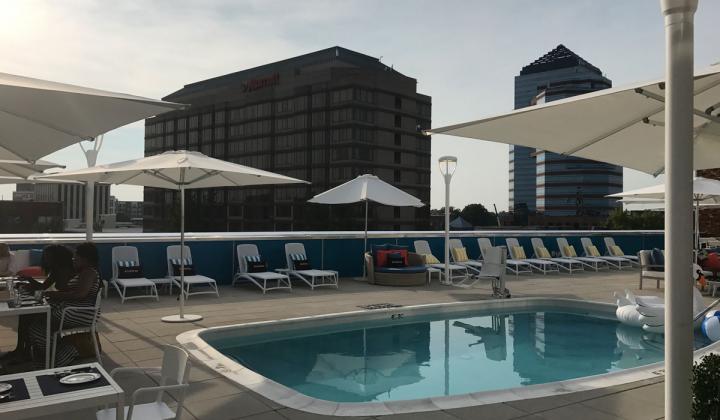 The brand eventually plans to expand the concept to other markets, including Phoenix, Arizona, and Austin, Texas.

“We want to create a unique hospitality experience that bring travelers and locals together to incite creativity and collaboration,” says Brian Hansen, general manager of Unscripted Durham.

Food options include The Patio, where guests are offered drinks and dishes poolside; allday, a mix-used coffee bar and eatery, and a lounge and cocktail area in the lobby called The Studio. Jeff Lee, director of food and beverage for Dream Hotel Group, says that the goal of the food offerings is to have something for everyone on the menu, whether it’s sushi rolls or burgers. The Patio menu reflects this vision, offering everything from pimiento cheese biscuits to a pork belly bun with sriracha mayo and a grilled lamb chop with yellow bell pepper and mango chili marmalade. The hotel even has its own beer, called Unscripted, a hoppy lager brewed by Durham-based brewery Fullsteam.

Unscripted has expanded past its own on-site offerings by incorporating local restaurateurs to fill the ground-floor storefront. In Durham, these spaces include pay-by-the-ounce taproom Pour Taproom, Mediterranean restaurant and bakery Neomonde, and a diner from the operators of two other downtown Durham restaurants, Littler and Pizzeria Toro. Unscripted pays homage to its roots as the former mid-century hotel by maintaining original architecture and design elements accented by bright colors, geometric patterns, and custom murals. The ground-floor diner will also be called Jack Tar Diner, a nod to the building’s first life as the Jack Tar Motor Lodge.