In many urban metro areas, launching an independent full-service restaurant can approach, if not top, $1 million when factoring in everything from real estate, insurance and utilities for buildout, furniture, inventory, and marketing.

The Essential Guide to Financing Your Restaurant

When funding a restaurant opening, industry entrepreneurs travel many paths—sometimes all at once.
January 2018 Daniel P. Smith

When it comes to financing restaurants, Dan Bavaro has traveled the meandering, choppy path of so many entrepreneurs, chefs, and restaurateurs before him.

For his first Bavaro’s Pizza Napoletana & Pastaria in Tampa, Florida, Bavaro relied on money earned through the sale of his New Jersey–based transportation business. But when those funds ran out during the restaurant’s buildout, Bavaro solicited additional capital from family and friends to finish the project.

For his subsequent Bavaro’s restaurants in St. Petersburg and Sarasota, Bavaro developed a relationship with a local bank and secured Small Business Administration (sba) loans, a process that sounds much easier than it was.

Long-term, Bavaro aims to purchase additional properties and eventually own as many as 15 Bavaro’s locations across Florida. He also dreams of creating a central commissary and maybe even purchasing a small farm to grow his greens. 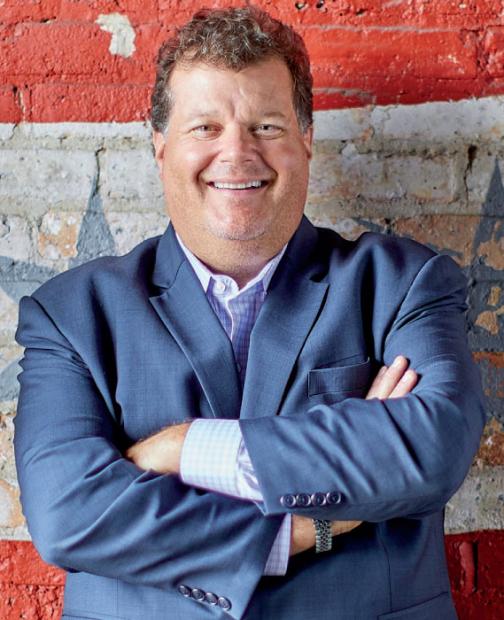 Odds are good that five-time James Beard–nominated chef Michael Kornick could capture the ear of just about any prospective restaurant investor, especially when walking into a meeting with Morton’s Steakhouse legacy David Morton at his side.

Though much more common on the quick-service side of the industry, franchising is alive and well among full-service players, with growing chains such as Twin Peaks, The Brass Tap, and Famous Toastery embracing the development strategy.

Over the next 10 years, the DMK team looks to open as many as 400 franchised locations, starting in the Midwest before spreading its wings east and west. For DMK’s leadership triumvirate, franchising is about speed and sound financial management.

“This isn’t about raising money, because we could do that,” Grossman says, noting that the trio did raise capital from investors to establish its franchising foundation. “Through franchising, we can open numerous stores each year and do so in a way that isn’t so capital intensive.”

That’s an ambitious list, Bavaro concedes, and one that will cost money—lots of money. As for how Bavaro will finance that—reinvesting company profits, taking on financial partners, or scoring additional loans among the potential avenues—time will tell.

“The only known for restaurants is that there will be unknowns, right?” Bavaro says with a laugh. “Well, that and the fact that opening a restaurant is expensive.”

Bavaro is certainly right about that.

In many urban metro areas, launching an independent full-service restaurant can approach, if not top, $1 million when factoring in everything from real estate, insurance and utilities for buildout, furniture, inventory, and marketing. Accumulating the capital to fund such ambitious efforts, particularly in an industry with a high mortality rate and with the lessons of the Great Recession still reverberating, can be challenging to say the least.

“There are no guarantees in the restaurant world, which is a high-risk industry with tremendous attrition that makes people hesitant to invest,” says Doug Roth, CEO and founder of Playground Hospitality, a Chicago-based restaurant consultancy that provides concept, branding, and culinary development services.

The third Roth generation in the restaurant business and a former partner in Chicago’s heralded Levy Restaurants, Roth holds experience as both a restaurant owner and investor, experience that has enlightened him to the intricacies of restaurant financing. While he knows stories of talented but unproven chefs grabbing capital to open their first restaurants as well as energized entrepreneurs coaxing investments with little more than a compelling idea—a play often leaning on vanity or emotion more than bare-knuckles financial analysis—Roth says more investors, from angels to banks and even family and friends, desire one thing: proof.

For many upstarts, however, those elements remain elusive, typically a product of time, experience, and opportunity more than inability.

“Getting capital generally gets easier over time, but finding that break in the beginning is often the hardest part,” says Andrew Miller, creative director of Out to Lunch Hospitality, a new collective slated to open its first restaurant, Good Fortune, in Chicago’s Logan Square neighborhood in the coming months.

In the rush to make their restaurant dreams come true, some industry entrepreneurs bet on themselves, signing home equity loans or maxing out credit cards. Many others rely on a mix of traditional and newfangled financing options to launch their first restaurant or expand their portfolios. Whatever the route, one thing is certain: capturing restaurant financing is rarely a smooth ride.

For many restaurant entrepreneurs, friends and family remain the starting point, often serving as a patchwork source of funding—$5,000 here and $10,000 there—to turn dreams into reality. Securing loans from personal supporters or trading fractional ownership in the business for capital, friends and family are generally those most likely to downplay one’s lack of experience; the most flexible, if not forgiving, collectors; and the eatery’s most enthusiastic ambassadors.

There are, of course, sensitivities about going to friends and family. Money can alter relationships, and the burden of delivering a financial return to loved ones can prove daunting and stressful.

“If the restaurant works, then you’re all on top of the world together. If not, then it can seriously damage relationships,” says Roth, who turned down an investment from his father in the 1980s to open Bistro 110, a Chicago mainstay for nearly 25 years. “I wanted to keep him my father.”

Beyond friends and family, many restaurant entrepreneurs seek private investment from individuals, consortiums, or even private-equity firms. Such investments might range from $25,000 to $500,000, though entrepreneurs, particularly those without high-level pedigree, should expect to be vetted and prepared to release equity stake in the business.

“Investors will want to know the concept, its point of differentiation, and why they should invest,” says Roth, who suggests discovering leads by googling “angel investors” in a particular market, inquiring through a chef’s group or state restaurant association, or researching the financial backers of other local restaurant openings.

Other investors, specifically high–net worth individuals entrenched in the community, represent a harder, though not impossible, find. Roth has seen the emergence of family offices—essentially affluent families with investment arms—becoming more involved in restaurants, albeit selectively, while existing franchisees of tired restaurant concepts might also be a target.

“These industry folks need growth and are trying to figure out how to get that,” Roth says of franchisees. “Sometimes, financing is about figuring out who needs you.”

There is also a sector of foodie investors who simply enjoy the pace and scene of restaurants, as well as the cachet of “owning” a compelling concept.

Last summer, Miller and Chef Charles Welch opened a Good Fortune–like pop-up in their desired Logan Square neighborhood to generate a following and, just perhaps, find financial backers. A local developer liked the concept and became a partner, agreeing to fund the purchase of a nearby two-story building that already housed a restaurant.

“It was just the break we needed,” Miller says.

After finding investors, restaurant entrepreneurs then have to negotiate terms, a hefty challenge in itself.

Over the last three years, James Razsa has turned down more than $1 million in investments to open Democracy Brewing in Boston, largely, he says, because investors wanted “insane returns.” If Razsa had accepted those investments, Democracy Brewing would be nearing its first anniversary, not still plotting an early 2018 opening. Still, Razsa has no regrets, especially after watching colleagues start their own brewery, trade capital for equity, and end up with less than 10 percent ownership upon the establishment’s debut.

“We wouldn’t have really owned [Democracy Brewing,] and the investors are the ones who would’ve done well on those deals,” he says. “That first money in can really take you for a ride.”

When it comes to external investors in particular, Roth shares some hard-earned wisdom from more than 30 years in the industry: Sometimes no deal is better than any deal.

Another traditional investor: Uncle Sam, albeit indirectly through the SBA and private lenders. With SBA-backed loans, the government agency ensures a significant portion of the loan, reducing the risk for private lenders. Most often, restaurateurs use the SBA loan to finance the purchase of a building, which then serves as collateral.

Bavaro used an SBA loan to fund the purchase of his St. Petersburg store that opened in June 2016. From unearthing decade-old business files to waiting four months for approval, the process was “excruciating,” he says. That said, he landed fair terms, retained his equity, and built a strong relationship with a local bank capable of funding future projects. In fact, he used an SBA loan to purchase his Sarasota building and looks to acquire another two to three properties utilizing his current SBA program.

“The SBA process was more seamless the second time through,” Bavaro says, noting that businesses seeking an SBA loan best maintain clean books and good standing with vendors and creditors. “You better believe banks are going to pull back the curtain.”

Razsa’s three-year odyssey to open Democracy Brewing will conclude this spring when the 150-seat brewery and cidery finally opens.

After rejecting various equity investments and failing to land traditional bank loans, Razsa established Democracy Brewing as a co-op. He raised $20,000 through an Indiegogo crowdfunding campaign in 2016 to secure the necessary legal support. He then scored favorable equipment loans from three different co-op lenders and raised $200,000 from a direct public offering.

Even still, Razsa remains in fundraising mode, seeking another $150,000 for additional soft costs through share purchases starting at $2,000. At that base level, investors will receive their $2,000 back within five years alongside a 5 percent annual dividend for the first five years and a personalized 20-ounce mug behind the bar.

“We’ve been able to get a lot of people excited and engaged with this model,” Razsa says, adding that workers will be able to purchase a $3,000 ownership share after one year of working at Democracy Brewing as well. “We see this as the path to building a sustainable, long-term business.”

Accomplished Chef Sean Sherman (“The Sioux Chef”) and his wife Dana Thompson, meanwhile, have endured their own three-year voyage to open Owamni: An Indigenous Kitchen.

The couple began with a $100,000 Kickstarter project to generate money and awareness for their full-service concept. Eventually raising $150,000, the project became one of Kickstarter’s most successful restaurant efforts and captured enough notoriety that the Minneapolis Parks and Recreation Board hand-selected Owamni for its massive Water Works redevelopment project in downtown Minneapolis.

“The beauty of Kickstarter is that we were able to engage with fans and jumpstart our project,” Thompson says. “People feel a sense of pride and community with us.”

“We know a lot of restaurants fail, and that’s been a real wake-up call for us to be smart about everything we do,” Thompson says. “Having various funding avenues is just the reality of many restaurant projects, so you put your head down and go after it as best you can.”