Over the past few years the company has grown to a position where it was able to start franchising.

The Southern pizza company is growing with a new look and strategy.
January 2019 Rachel Taylor

Since opening more than 22 years ago just outside the gates of Louisiana State University in Baton Rouge, Rotolo’s Pizzeria has grown from a college bar and pizza joint to an established brand across four southern states.

The idea to open a pizza-and-bar restaurant came to Mitch Rotolo Sr. in 1996 when he was exploring the scene around LSU. He had some experience working in kitchens throughout high school and says his mom was a great cook, “but [I] had no formal training.”

“[It started] as a quasi-business, quasi-fun hobby project, you know? I liked hanging out around the college campus areas and I didn’t make it through college,” Rotolo Sr. says. “So, I had an opportunity to open a college bar pizza joint and I took it.”

He adds, “And, of course, at 24–years-old I liked the bar scene a little bit, so I was good at that, too. I combined them together and Rotolo’s was born.”

Rotolo’s growth began with company-owned stores, but over the past few years it scaled to a position where franchising was a viable vehicle for expansion. Today its 32 locations are a combination of company- and franchise-owned units. 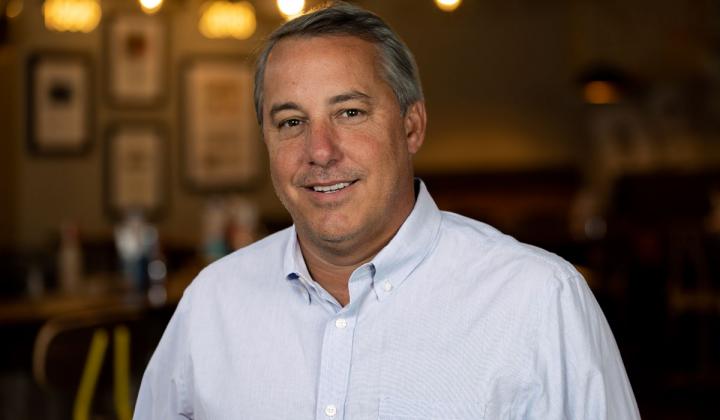 "I opened a true pizza pub in 1996 out of passion for good food and a good time, which is what I continually try to deliver as a culture to the community," says Mitch Rotolo Sr.

A part of Rotolo’s business model is to own each individual market when it comes to pizza, and Rotolo Sr. feels the company has accomplished that in the four states—Alabama, Texas, Florida, and Louisiana—it currently operates in. As the brand looks to expand its franchising footprint, Rotolo Sr. wants to push into new markets, but do so with carefully selected operators.

“I think we’re fairly developed in the markets we’re in and we’re looking to open new markets,” he says. “I think we definitely want to get the right people involved with our brand. We’re pretty proud of our brand and what we do. We don’t just have a franchise sales team out to just anybody who can afford it. We’re very particular, so if we can get our existing franchisees to open a few more units and bring a few more franchisees into the system each year we’ll grow as fast as I think we need to grow.”

The new franchising initiative also caused the company to take a look at its design and overall operations. Rotolo’s decided to revamp its model and launch a new version of the brand: Craft & Crust.

This updated store has allowed the brand to differentiate itself from other competing pizzerias in established and fresh markets.

“For years we were Rotolo’s Pizzeria and when we opened in a new market people weren’t as familiar with our brand, so they associated us as being a pizza place,” Rotolo Sr. says. “Well, we offer so much more than that. We’ve got a full-service bar. We’re truly a craft-draft bar. We make craft cocktails and we are pretty close to a scratch kitchen. All of our recipes are either made in house or are housemade recipes through commissary that propriety pack for us. We make our dough at every location, every day, so we really wanted to send that message of what we are. Craft & Crust really was a better signature for what the brand is. It’s an authentic craft experience when you come into our locations.”

So far, the brand converted two existing units into the Craft & Crust model that it believes will be in business for the long haul, Rotolo Sr. says. As new locations open with the Craft & Crust design, he says Rotolo’s Pizzeria isn’t completely going away. Some existing units will continue running as they always have, but some will eventually be remodeled.

“We may open in the market with a new location and then we’ve got some units we’ll keep running as the pizzeria model because there, just again, it’s all one brand,” Rotolo Sr. says. “We’re running it as it is. The food is very similar in the two [models] and Craft & Crust is just that next evolution up of our brand. The pizzerias that we’re keeping open are going to keep running the way their running.”

Before the introduction of Craft & Crust, the last time Rotolo’s made changes to a logo was in 2003. After 15 years it was time for a good facelift, Rotolo Sr. says. “Craft and Crust is exactly that. We updated what we already did really well and enhanced on some new things that we didn’t offer at the pizzeria level,” he adds.

While Rotolo’s offers take-out at all locations, the company is a full-service operation. With the growing amount of fast-casual concepts popping up across the country, Rotolo’s needed a way to compete with these upstarts, especially during lunch. To pull in more customers at this time, the company added a slice program to Craft & Crust.

One goal of Rotolo’s model is to educate its customers to different pizza styles from around the world. Whether it’s a Neapolitan, Detroit, or Chicago-style, the company introduces these different options throughout the year. In order to showcase specialty offerings, Rotolo’s Craft & Crust models will feature a slice bar in addition to the slice program.

“The slice bar is a way to educate the public on new styles of pizza, well not necessarily new styles of pizza, but different pizzas from all over the world,” Rotolo Sr. says. “You know Detroit has their own style of pizza a lot of people don’t know that. So, what is Detroit style pizza? We’ll make a Detroit style pizza and put it on our slice bar and we’ll sell pizza by the slice.”

He adds, “This is something that’s new to Craft & Crust, so it’s pretty exciting to have different offerings where we can give customers variations of different food from all over the world when it comes to pizza.”

The slice bar will also help the brand increase traffic during lunch in a way the pizzeria model couldn’t.

“I do think the people that have a limited lunch time certainly appreciate [the slice program] and will come to us more frequently,” Rotolo Sr. says. “We’re a sit-down table service restaurant, so if you have an office of three people who want to go to lunch typically one person will run out and get lunch for that office or if they all leave for lunch they’ve got to be back in a limited window. The slice bar now helps us compete with the timing of the fast foods and the quick service without being a quick-service restaurant.” 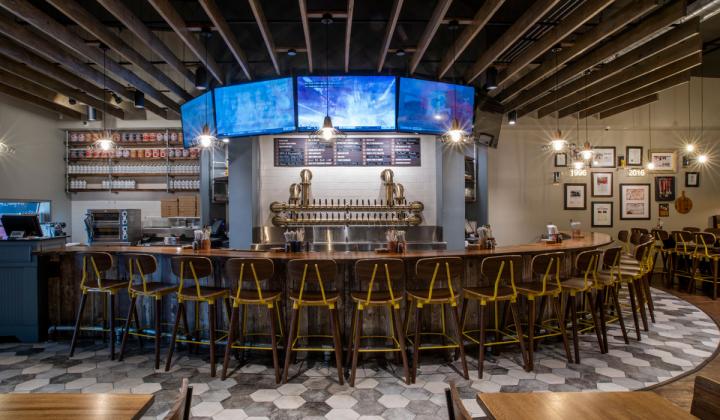 Rotolo's model might be changing, but it's commitment to top-quality pizza is not.

Devoted customers of Rotolo’s shouldn’t panic when a Craft & Crust opens near them. Rotolo Sr. reiterates the menus will be similar at both places. The new model just allows the brand to be a little more creative on both food and beverage offerings. Whatever the company does, one goal remains a high priority for them: “We want to own the pizza space,” Rotolo Sr. says.

“We’ve been at this for 22 years, things do change a little bit,” Rotolo Sr. says. “We own the pizza market where we are. We want to be known as the best pizza in the town you’re in but we’ve also got a great salad and pasta menu.”

He adds, “At the Craft & Crust models we’ve got a little bit of a difference in our evolution from our original menu to Craft & Crust, which is the new look of the locations today.”

“The core pizza menu is probably as strong as it’s ever been,” Rotolo Sr. says. However, that doesn’t mean some experimentation and innovation isn’t going on in. Rotolo’s has an advantage in the kitchen to help with menu innovation and research and development: Mitch Rotolo Jr. Growing up surrounded by the restaurant and pizza industry helped Mitch Jr. become the pizza maker he is today. Not only has he competed in the World Pizza Games, he’s also a current world champion, holds a place on the World Pizza team, and has two world records.

“The Figgy Piggy is not a pizza that we designed,” he says. “It’s a pizza that did win first place in Parma, so we reproduced that pizza. We’re bringing in pizza from around the world into our restaurants to really show people what you can do with it, so this is another example of what we’re doing.”

Flavor is an important factor when new items are being created. Customers aren’t allowed to make substitutions on certain pizzas on the menu at Rotolo’s. “It may sound kind of funny, but you put a flavor combination together that really goes together for a reason. If the customer wants to make a change it, it changes the profile of the pizza,” Rotolo Sr. says.

The beverage menu is specifically selected to pair with certain menu items as well. Craft & Crust hosts flight nights and promotes certain beers with different pizzas. Each restaurant operator and franchisee works with Rotolo’s marketing team to add local brews and spirits to the menu.

“We’ll do some different beer flights that we like flavor profiles for so we’ll marry some and we’ll put two to three different brews with different flavors of crust that we’re bringing out at the moment and that’s done locally in each market,” Rotolo Sr. says. 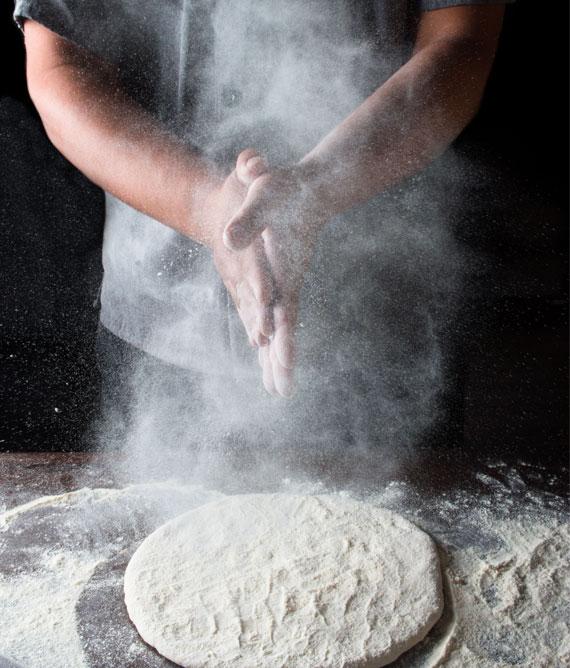 Rotolo's makes its dough at every location, every day.

He isn’t shy to admit that pizza is the main focus, but knows the whole menu needs to stay relevant as well. Flavor innovation and development isn’t limited to pizza—it touches every part of the menu.

“We constantly are making our menu fresh and hot. Our core menu is pretty solid we’re happy with it and making very few edits and tweaks to that, but we’re always putting stuff on the outsides where there’s apps, different salad combinations and obviously pasta,” Rotolo Sr. says. “There’s lots of new food offerings coming that are outside the pizza segment. When it comes to pizza we definitely want to be top of our game but we want to compete in all aspects of our menu.”

At the end of the day, Rotolo Sr. is happy with how far his college pizza bar has come, and what’s still left for the future.

“It was a lot of fun and it grew into a real business,” he says. “I’ve been doing this since the 90s. I opened a true pizza pub in 1996 out of passion for good food and a good time, which is what I continually try to deliver as a culture to the community.”