In June last year, the restaurant community lost an icon when Anthony Bourdain took his own life.

The irony of the food business is often that restaurant workers bend over backward to help guests, but do so little to help themselves. These culinary innovators are making it safe for their team members to ask for help.
May 2019 Laura D’Alessandro

It’s a devastating pattern, but nonetheless a real one. A member of the restaurant community is lost to suicide or overdose. Shockwaves ripple through. The issue of mental health bubbles to the surface for a moment, but soon the tidal wave of day-to-day work that consumes restaurant employees regains its pull and those feelings are pushed back below the surface. Little change is made to help restaurant workers who need help. Until now.

In June last year, the restaurant community lost an icon. When news of Anthony Bourdain’s death broke, his friends, fellow chefs, and fans alike were heartbroken. For many restaurateurs the moment was a turning point. For others, a turning point had already come, and it hit closer to home. 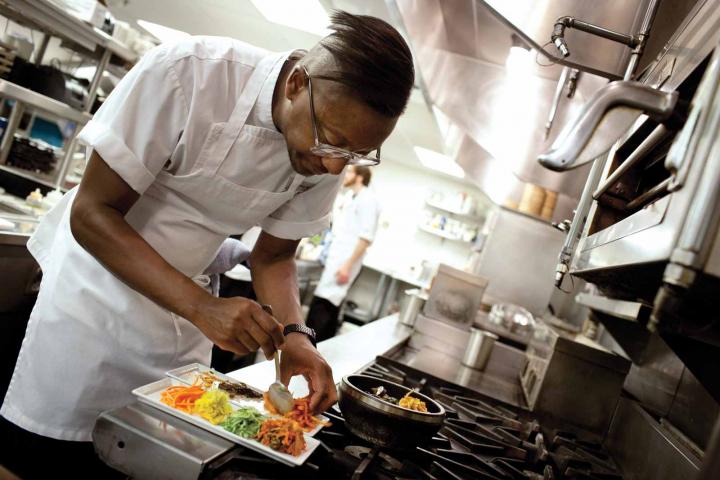 Gregory Gourdet, the culinary mind behind Departure in Portland, chose sobriety over being sick, tired, stuck, and seeing his work suffer.

For chef Gregory Gourdet, a Top Chef contender and the culinary mind behind Departure in Portland, Oregon, Bourdain’s death spoke magnitudes about an industry in trouble.

“Bourdain is such a global icon for our industry his passing shook us all,” he says. “The fact that he had it all and every resource at his fingertips to change anything he wanted to about his life and still choose what he did proved that we have a long way to go in terms of helping each other talk and be open and be able to ask for help. This coupled with the sexual harassment reckoning that has taken place in our industry as well lately brings to light that big conversations need to keep happening in our restaurants so everyone feels they can be successful, appreciated and have safe outlets.”

Gourdet is a sober chef because, like many who choose sobriety, he knew in his soul that he could not continue his life with alcohol and addiction. In his own words, he was sick and tired of being sick and tired. He witnessed friends around him moving on with their lives. He felt stuck in a cycle of addiction. He also saw that his work was suffering.

“I was constantly lying to employers about my whereabouts and reasons for calling out or being late,” he says. “The sad part is the more I got promoted, the deeper I got into my addiction.”

The behavior didn’t always fly, and, after losing his favorite job and working in places where bad behavior was acceptable, Gourdet finally faced an ultimatum. A coworker told him he could only continue his current job if he went to rehab. He finally had to tell his family and friends.

“Many of my friends expressed concern over the years,” he says. “Some of that concern was expressed through anger and disappointment.”

Once he chose to get sober, it wasn’t an easy path. Gourdet says it took two more years of ups and downs, but ultimately he knew deep down that he had to make this choice.

“You don’t get sober because someone tells you to,” he says. “Addiction is too strong of a disease. You only get sober when deep in your heart, soul, and mind you know you are ready to give up drugs and alcohol for the rest of your life—or at least one day at a time.”

Since then, Gourdet has been reaching for the stars and getting pretty darn close to them. Once he got sober, Gourdet says, he was full of vigor and passion. Work became easier—no hangovers! Without drugs and alcohol, he began to change all his habits, both in and out of the kitchen.

“[I] started running and going to the gym after work to replace time spent at the bars and clubs,” he says. “I set goals. They were mostly based around running farther than ever, and after many marathons I ran my first 50-mile race.”

Gourdet’s cuisine has changed, too, both in what he eats and what he cooks. He started following a paleo diet—he gave up dairy, gluten, and processed foods. It’s switched his view of food to the lens of nourishment. He says this inspires all his cuisine today.

“My food became better because I had a much clearer head to seek inspiration and create with.”

Read more: This Group is the AA of the Restaurant Industry

Patrick Mulvaney, chef and owner of Mulvaney’s B&L in Sacramento, California, was about to hop aboard a plane when news of Bourdain’s death hit. His wife called him. She knew he’d find out as soon as he landed if she didn’t get the news to him right away. But months before, Sacramento’s restaurant community had seen a wave of suicides. To Mulvaney, change was past due, and he had already put a ball in motion.

“We’ve had 15 people die in Sacramento hospitality in the year,” Mulvaney says. “Four in December alone.”

After a chef who had been a friend of Mulvaney’s passed away, he and his staff and the greater restaurant community began talking about what their responsibilities were when it came to mental health. Mulvaney planned a meeting with Kaiser Permanente, the healthcare provider. Then news of Bourdain’s death hit. Mulvaney thought, Change needs to come faster.

“A chicken takes eight minutes to cook—we need something to change now,” he says. “I don’t care if it’s ineffective, it’s fine, that’s how we learn. In the kitchen, if we make something and it’s wrong, we move forward. If the tribe wants to move fast, let’s go.”

Ten days after Bourdain passed, Mulvaney hosted a meeting with several key stakeholders in his community and 15 restaurateurs. He later served as keynote speaker to a conference of mental health professionals. What came from all these talks was a program called I Got Your Back that encourages restaurant team members to look out for each other’s mental health. A designated team member wearing a medallion or pin will be certified in helping people in the restaurant find mental health resources.

“It also means that for leadership, that we have empowered that person to reach out,” Mulvaney says. It’s along the lines of the slogan, if you see something, say something. A designated I Got Your Back team member is looking out for others who may seem in need and checking in with them.

The program has been informally beta tested in Mulvaney’s restaurant. Eventually he hopes it will evolve into an online portal that will spread nationwide. He’s received interest from his state restaurant association and hopes the program is released through the state’s food handler license database, letting anyone who works in the restaurant industry know that they can get help.

“We had a server die by suicide on Christmas,” he says. “If we can save one, that’s good, if we can spread it to other restaurants, that’s better.”

Cooking for the craft, not the rush 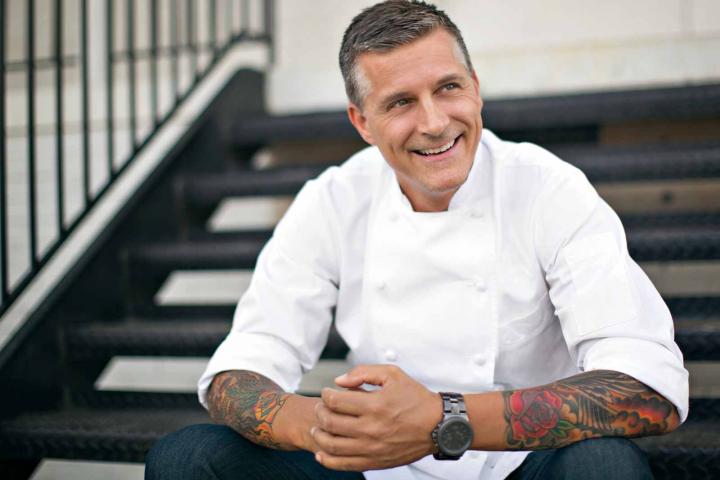 Scott Crawford cooks for the craft after working through Alcoholics Anonymous and getting involved with Ben’s Friends.

“I was a troubled young person with a lot of manic energy and I liked to party,” Crawford says of his youth. “That’s why I chose the restaurant business.”

As a restaurant manager in San Francisco, he realized just how hard his colleagues were partying.

“I was a manager and I had to allow servers to go to the methadone clinic when they were nauseous,” he says. “That’s when it hit me that our industry was really in trouble. It wasn’t just partying anymore. This was hardcore drug abuse.”

And Crawford fell into it, too. A few years later, his Type 1 diabetes diagnosis came, but he didn’t stop using. After losing his sous chef, Crawford, too, had a bunch of close calls, he says.

“My brother did an intervention when I was at The Woodlands,” he says. “I had completely lost control of my addiction. … My brother knew I was going to die. And that’s all it took for me to break, because I knew he was right.”

“I worked out until exhaustion so that I could just go straight to bed and avoid partying,” he says. “I couldn’t afford rehab. It’s a luxury.”

It was then that Crawford met Mickey Bakst, one of the founders of the hospitality industry’s support group Ben’s Friends. Crawford asked Bakst to be his sponsor. “He’s still my sponsor today.”

Crawford leads the Raleigh chapter of Ben’s Friends, where he shares his strategies for getting and staying sober with the folks in the industry who need help. He tells them about the all-night gym, about finding a hobby, and about having a sponsor.

Crawford says that at first, sobriety in the restaurant industry was awkward. And he was still sucked in by the rush—the rush of service became the drug, he says. “I’d just switched addictions.” But soon that tapered off, too.

“With maturity and time, and a better understanding of who I am as a human, there was no more rush needed,” he says. “I enjoy an intense service, but I don’t seek it out. I don’t cook for the rush I cook for the craft.”

He also takes much better care of himself than he did before.

“I don’t deny myself good nutrition, rest, and balance,” he says. He points to the work ethos of the restaurant industry as driving his previous lack of balance in his life. “You’d feel guilty if you weren’t working 70 hours a week before. There’s something about this industry that makes you feel this way. I allow myself balance.”

He provides the same for his team at Crawford and Son. The restaurant closes each January for two weeks so that employees can rest after the holiday rush.

Thank you and goodnight 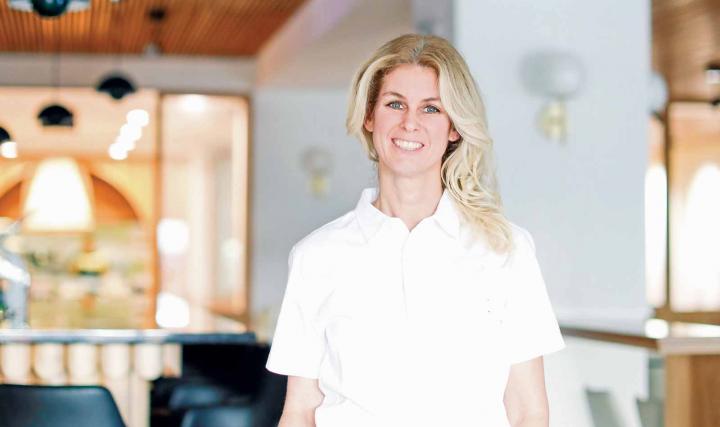 “We set the tone from the beginning that the team wouldn’t be focused on booze—no ‘shift drinks’ for anyone.” —Jen Carroll

Rest is also important to Jen Carroll, co-executive chef at Spice Finch in Philadelphia. Carroll decided to get sober over one year ago. She was tired of binge drinking, and the three-day hangovers that followed.

“I didn’t like who I was around other people when I was drinking,” Carroll says. But it had been easy to fall into the habit.

Carroll got into the restaurant industry by default. It was an easy summer job, she says. And there were opportunities to travel worldwide. She could be creative without sitting in an office.

“I knew mental health and the restaurant industry intertwined from the start,” she says. “I thought the restaurant world was a fun and party-like atmosphere. You could drink at work and still be ‘working,’ which blurred the lines. It certainly looked glamorous from the outside, but I quickly realized as I grew in my career that it wasn’t a sustainable, healthy lifestyle. Not being clear and focused really affects your daily work.”

Carroll’s fiancé and co-executive chef, Billy Riddle, is who helped her get sober, not because he struggled with addiction, but for his own personal health gains, she says. Now Carroll’s restaurant focuses on positivity. Instead of meeting in the bar after work, the team will meet in a coffee shop before, or take their meetings to a park.

“We set the tone from the beginning that the team wouldn’t be focused on booze—no ‘shift drinks’ for anyone,” she says. “We are all about saying, ‘Thank you and have a good night.’”