With some help from Chef Luca Annunziata, the Johnson & Wales senior wowed a team of culinary experts.
March 2018 Danny Klein

Chef Luca Annunziata had some last-minute advice for his mentee Sarah Rountree.

“Be wise with the money,” says Annunziata, chef and owner of Luca’s Modern Italian Kitchen in Charlotte, North Carolina. “Go to Vegas. All on red.”

While Annunziata was joking on this count, he was nothing but sincere when recalling Rountree’s recent victory in S&D Coffee & Tea’s eighth annual Culinary Challenge.

“She made my cry when she won,” Annunziata says.

The chef, who was a mentor in last year’s edition of the competition, held at Johnson & Wales University Charlotte, says he knew moments after he laid eyes on Rountree’s entry that she was a front-runner.

Rountree, a senior from Westport, Connecticut, studied aboard at Ecole de Cusine Alain Ducasse in Paris this past summer. She infused many of the French techniques she learned there into her dish, Cold Brew Coffee & Ancho Chile Braised Short Ribs.

“There’s a lot of butter in my dish,” she says, “which is also Southern you could say.” 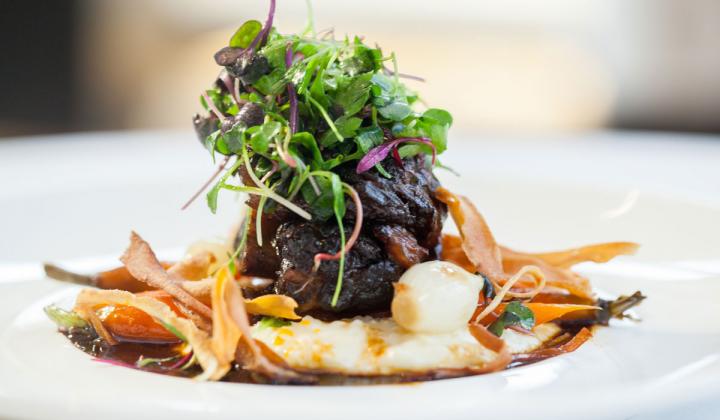 Rountree used the ancho chiles in the braising liquid with the coffee, with butter balancing it out. She also deployed coffee when cooking the carrots and pearl onions by putting them in coffee grinds into the oven at 200 degrees for about 30–40 minutes and infusing the flavors. Creamy, cheesy grits joined the dish and then a light herb salad, and some parsnip chips, were added for crunch and acidity to cut through all the fat.

Rountree says they spent about five hours or so working on the dish before it was time for the February 20 live event, where the final 10 dishes and presentations were judged by an expert culinary panel, including: Steve Sturm, corporate executive chef, Firebirds Wood Fired Grill; Joe Kindred, chef/owner, Kindred and Hello, Sailor; Chase Gomez, executive chef, Charlotte Prime, LLC; and Peter Reinhart, chef on assignment, JWU Charlotte.

“Did I think that was a winning plate? Absolutely. She had it down to presentation, flavor, and balance. The passion behind it and the good energy, I think she had it all,” Annunziata says.

The chefs agreed, awarding Rountree top honors and the $10,000 prize. Emily Williams, a sophomore from Fort Mill, South Carolina, finished second for her recipe, Coffee by the Pound, and earned $4,000. Kentrell French, a senior from Sanford, North Carolina, placed third for a Coffee Kombucha Float, and took home $1,500.

Rountree’s dish morphed by the round. She says the first iteration was “rough” and came out “really bad. The ancho chile was really strong and it was really spicy and the coffee was bitter. … I wasn’t really happy with the first time and the second time I made it was actually for the semifinals. So that was a little nerve wracking because I wasn’t really sure how it was going to come out the second time. But luckily it ended up coming out perfectly and I didn’t really change it much from there.” It was Annunziata’s suggestion to add the salad.

Rountree says she would like to graduate and train under Michelin-starred chefs for the next decade or so. Then, later in life when she’s ready to settle down and start a family, shift to the education side of the culinary world.

In the meantime, Rountree will set aside $1,000 of the prize money and experience a Michelin-starred dining experience. Another $1,000 will go to additional culinary pursuits, and the rest to her education.

This was her first time competing, at any level, and she says the experience taught her a great deal about cooking in a very strict timeframe. It encouraged dish composition and really stressed balance, from flavor to texture.

“Just thinking about all these textures and how the customer was, whoever was eating it was going to eat it, and what they want in a dish, was really a big learning experience,” she says. “And also just cooking under pressure with a time crunch, thinking about planning and being organized. I had to make a time chart of what I was going to do at what time. It was definitely a huge learning experience. Very beneficial.”