At Hill Country, which has approximately 100 hourly employees at its New York City restaurant alone, more than 50 of whom are tipped, eliminating the tip tax credit would translate into an approximately $750,000 in additional labor costs per year.

The Tip-Pooling Shakeup, and What it Means for Your Restaurant

Six months after Congress passed new legislation around tip pooling, restaurants across the country continue familiarizing themselves with the guidelines and running the numbers to assess what makes sense for their individual operations.

“I don’t think we’re alone in still digesting this and trying to get clarity on some of the more nuanced elements of the law,” says Marc Glosserman, founder and CEO of Hill Country Hospitality, which runs Hill Country Barbecue Market restaurant in New York City and Washington, D.C.

Buried within some 2,300 pages of the federal omnibus spending bill passed in March, the Tip Income Protection Act of 2018 allows for employees who do not customarily receive tips—busboys, chefs, line cooks, and the like—to participate in tip pools while also declaring that supervisors, managers, and owners cannot participate in tip pools.

The new legislation repealed a 2011 U.S. Department of Labor regulation that prohibited workers who did not regularly receive gratuities from participating in tip pooling regardless of whether their employers utilized the tip credit.

From the operator’s perspective, Glosserman sees the legislation as a positive.

“This allows us more flexibility regarding how the tip pool can be distributed and helps us address the pay disparity that exists between back and front-of-the-house employees,” he says.

Colorado Restaurant Association spokesperson Carolyn Livingston says many restaurants across the state similarly viewed the federal legislation in a positive light, though the lingering consensus is that owners will closely examine what’s best for the culture of their respective restaurants—and their bottom line.

Tip-pooling legislation is seen as, “an answer to the pressures so many operators are feeling when it comes to labor costs,” she says. “Now that said, we’re not seeing wholesale changes taking place, but rather a number of operators quietly testing different things out to see how it flies with employees and customers and if the numbers make sense.”

According to Nendel-Flores, the legislation tasks restaurants to weigh the benefits and drawbacks of taking advantage of the tip credit and to also reevaluate their compensation structures.

At Hill Country, which has approximately 100 hourly employees at its New York City restaurant alone, more than 50 of whom are tipped, Glosserman says eliminating the tip tax credit would translate into an approximately $750,000 in additional labor costs per year.

“This legislation will have a profound impact on how restaurants like ours look at pay scales and structures,” Glosserman says. “We’ll all need to look at ways to absorb this without simply passing it onto consumers.”

The legislation authorizes the Labor Department to recover tips unlawfully kept by the employer, an equal amount in liquidated damages, and a $1,100 civil penalty per violation, making noncompliance especially costly, Nendel-Flores says.

To drive compliance, he suggests owners closely review the duties of anyone who could arguably constitute a supervisor or manager, double-check that the restaurant is paying the full mandated minimum wage to all employees, and maintain accurate records of tips received in a fair and equitable tip-pooling arrangement. Furthermore, he advises restaurants to stay apprised of state and local tip statutes and regulations, as jurisdictions often tweak their guidelines.

And if that’s not enough, Nendel-Flores offers another nugget operators might mind.

“In light of the upcoming mid-term elections, it’s possible this legislation could be amended depending on the composition of next year’s Congress,” he says. 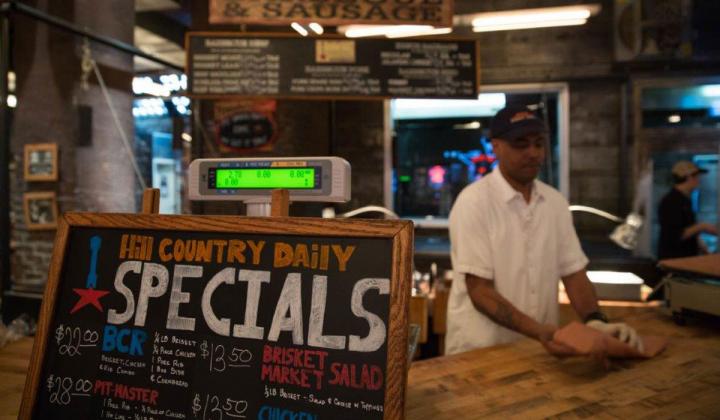 Tip-pooling legislation is seen as, “an answer to the pressures so many operators are feeling when it comes to labor costs,” says Colorado Restaurant Association spokesperson Carolyn Livingston.

Despite public lobbying from a number of prominent area restaurants, Washington, D.C., voters approved a minimum-wage hike for tipped employees on June 19, effectively phasing out the tip credit or tipped wage in favor of one prevailing minimum wage for all employees.

With the move, the nation’s capital joins seven states—Alaska, California, Minnesota, Montana, Nevada, Oregon, and Washington—in eliminating the tip credit, while legislators in various other states, including New York, continue to grapple with the issue.

D.C.’s Initiative 77 phases out the current $3.33 tipped wage over the next eight years before defaulting to the standard minimum wage, which will hit $15 per hour in 2020 and rise with inflation each year thereafter.

That rapid ascent creates a harrowing picture for the city’s restaurants, says Josh Phillips, general manager of D.C.’s heralded Espita Mezcaleria. Phillips estimates this his 150-seat restaurant will need to produce as much as $1 million more in annual revenue to cover all the added costs.

“The tip credit is a system in D.C. that works [and] provides a mechanism for upward mobility,” Phillips says. “The math [Initiative 77] poses is incredibly challenging and what is causing fear among both business owners and employees.”