Wage and labor regulations have been contentious issues far longer than this political season, but many think the overtime rule that was enacted in May will be one of the first addressed by the new administration.

From immigration to wage and labor regulations, the restaurant industry could be in for a major shakeup.
February 2017 Kevin Hardy

In surveys conducted across 11 consecutive months leading up to the presidential election, operators questioned by the National Restaurant Association expressed negative sentiments about the business environment for the two quarters following. And then, seemingly overnight, their tune went from sour to sweet: The nearly year-long adverse trend reversed in November, when operators were interviewed after Donald Trump was elected president.

“They had a negative outlook for business conditions in October, but in November, they believed conditions were going to be better in the next six months,” says Cicely Simpson, executive vice president of government affairs and policy at the NRA. “So we believe operators have a very positive outlook.”

Trump’s roller coaster of a campaign promised an agenda of sweeping change for the nation. At its core, the populist campaign promised a rejuvenation for the American economy. Now, the billionaire’s fervent pro-business positions are poised to reshape the U.S. business climate, including the possibility of major changes for labor regulations and food policy for the restaurant industry.

Here’s a look at three ways the Trump White House may set the restaurant industry on a new course:

Restaurant industry insiders expect an experienced business hand like Trump—not to mention a cabinet loaded with wealthy business leaders and a restaurant executive—will provide regulatory relief from what were viewed as overly burdensome Obama-era rules.

Simpson points to the overtime rule as a prime candidate for repeal or reform under Trump’s leadership. In May, the U.S. Department of Labor ruled that salaried workers who earn $47,476 or less per year would be eligible for overtime pay—nearly double the previous threshold of $24,000. That change would significantly increase restaurant labor costs: Many operators would be forced to raise pay for managers or assistant managers, or pay them time-and-a-half for performing more than 40 hours of work per week. The NRA and other business stakeholders petitioned the White House to ease up on the rule, arguing the change was too drastic and rapid. But such complaints fell on deaf ears, Simpson says.

“The industry had worked on overtime for a year and a half before that rule ever came out. There was not an opportunity for dialogue,” she says. “There’s case-in-point history there, and actual examples where we thought a year and a half of work would have borne some fruit.”

She expects Trump’s administration will rescind or significantly rework that policy, which in November was placed on hold by a federal judge in Texas when challenged in court.

Likewise, she believes Congress will move quickly to fully repeal or make major changes to the Affordable Care Act, possibly as early as the spring. The NRA continues lobbying for a change in the ACA that would make it applicable to employees who work at least 40 hours per week, which would provide operators relief from the current threshold of 30 hours per week. But even with a Republican-controlled Congress and White House, Simpson says, ACA changes could drag on for months as the complexities of the policy are debated in Washington.

“I believe they’re going to tackle it very quickly,” she says. “Certainly, it’s going to take time. That’s the thing with all of this: Even if you undo it overnight, what you replace it with is going to take weeks, months, to come up with a plan.”

Restaurateurs should expect a relaxed regulatory environment over the next four years, says Dan Glickman, a former U.S. secretary of agriculture under President Bill Clinton and current senior fellow at the Bipartisan Policy Center. Yet it’s unclear whether Washington’s culture of deregulation will apply to food safety measures.

Consumers are overwhelmingly in favor of efforts to reduce food-borne illness, Glickman says, and don’t necessarily view them in the same partisan lens as other regulatory issues. “If they try to go too far to do away with efforts on testing and enforcement, I think the public will get very upset, notwithstanding their ideological framework,” he says. “I saw this during the George W. Bush administration. There was a tendency to go toward voluntary efforts, but once there was a salmonella outbreak, the public would say no way.”

During the campaign, Trump’s organization posted a fact sheet online targeting the “FDA Food Police” as an agency where it could eliminate regulations. That memo was later removed and replaced, though the new one did not mention the FDA, according to The Hill Extra, a political newspaper in D.C.

Francine Shaw, president of Food Safety Training Solutions, says she is concerned that Trump views the FDA’s recent reforms of animal and human food safety measures as regulatory burdens. Those rules won’t be easily overturned, though she said some unfinished agency rules may be on Trump’s chopping block. “It’s in our nation’s best interest to regulate, monitor, and enforce food safety issues to protect the health and safety of consumers,” Shaw says. “Our country needs to have clear protocols in place to protect our food throughout the entire process—growing, producing, manufacturing, shipping, selling, and serving—to prevent foodborne illness incidents and outbreaks.”

Alden Parker, a regional managing partner for the Fisher Phillips law firm and a member of the California Restaurant Association’s legal center, says state and local governments will likely continue to increase regulations on the restaurant industry, even as Washington looks to usher in regulatory relief.

In the wake of congressional inaction on the federal minimum wage, many states and cities have approved their own minimum-wage hikes. Other statewide regulations require mandatory sick leave for all workers and increase employer liability in civil court for wage or workers compensation violations. “I think it will be vastly different in red states where you have a more business-friendly approach to regulation. They will continue to take their cues from the federal level, which will slow down regulations and probably start eliminating some,” Parker says. “In other states, usually along the coasts, you’re going to end up seeing a big focus on the local ordinances.” 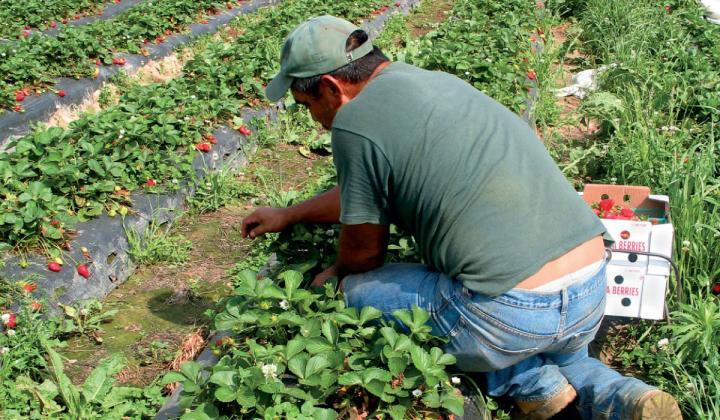 The American Farm Bureau Federation predicts fruit production in the U.S. could drop by more than half and meat production by 31 percent if stricter immigration regulations are enforced.

Experts doubt Trump will deport millions of undocumented immigrants en masse as promised during his campaign. But a hard line on immigration reform and mass deportations could drastically affect the American food supply and food prices if immigrant labor becomes scarce. The American Farm Bureau Federation predicts American fruit production could drop by more than half, while meat production could drop by as much as 31 percent, under a stricter immigration enforcement environment.

During his campaign, Trump pledged that his across-the-board tax cuts would create the lowest tax rate since before World War II. He promised that no business would pay more than 15 percent in income taxes. Trump suggested paying for the cuts by reducing or eliminating most deductions and loopholes for the rich, adding a one-time 10 percent tax for repatriation of corporate cash held overseas.

Trump will nominate at least one member of the nation’s highest court, with other vacancies possible during his term. Legal experts believe the court will tackle several issues relevant to the restaurant industry, including the enforceability of arbitration agreements and standards for joint employers.