Retaining talented staff is a priority for Union Square Hospitality's group of restaurants, including Gramercy Tavern.

Is it Really Possible to Reduce Employee Turnover in a Restaurant?

It's all about creating a clear-cut strategy from day one.
April 2019 Gary M. Stern

The name of the game in keeping a full-service restaurant thriving and generating return guests is retaining talented staff. But unfortunately, the dreaded reality for many operators is the opposite dilemma. High employee turnover is simply a way of life. According to a study conducted in 2017, a whopping 72 percent of all restaurant workers left their jobs compared to a 47 percent rate across all industries.

Per another survey by the advocacy group, Restaurant Opportunities Center United, the dominant issues leading to turnover in the restaurant industry included: wages, benefits such as paid sick leave, the ability to move up and get a better and higher paying job, and women facing gender restrictions.

Most restaurants lose staff in the first 90 days

The major factor driving the high turnover rate in most restaurants starts with “not having training and bad supervision,” says David Scott Peters, who runs the Restaurant Expert, a Phoenix-Arizona-based restaurant training and consulting firm. The majority of restaurant employees depart in the first 90 days of being hired “because they don’t know what their job is and are tired of having a bully manager yelling at them. Instead of asking for help, they leave,” he says.

“Employees burn-out due to long hours, and it’s a very demanding and thankless industry,” says Nicholas Makris, an associate professor of food and beverage management at Johnson & Wales University in Providence, Rhode Island, who also owns Andreas Greek, a restaurant in Providence.

What is rising minimum wage doing to restaurants?

Why are so many places going bankrupt?

Several factors, including the lack of widespread health insurance, low federal minimum wage, and a disparity in tipping where servers and bartenders prosper but the back of the house doesn’t, contribute to the high turnover rate, Makris says

But the restaurants that create a clear-cut strategy to retain staff, marked by specific training, clear expectations, and that treat employees with respect, can stem the tide of rising employee turnover, and keep staff happy as well as on the job.

The first thing restaurants must do is offer a structured onboarding (defined as the mechanism where new employees acquire the necessary skills to succeed on the job) process, which entails training new staff on how to perform their roles starting day one. On their first day, new staff should be provided with a manual identifying exactly what is expected of them and introduce them to management and other employees to make them feel included. 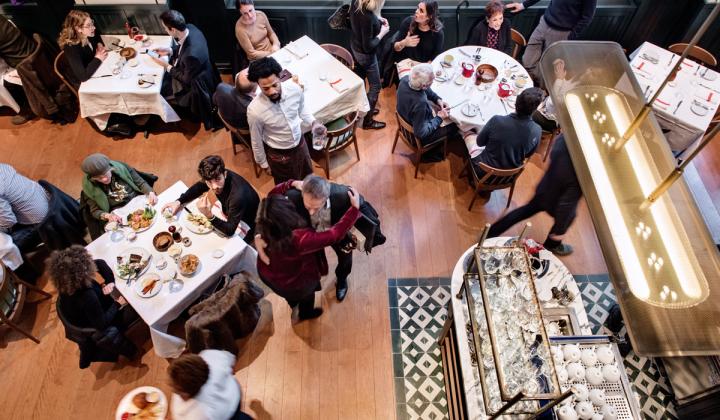 “Providing them feedback every single day and not ignoring when they do something wrong [helps retain them],” Peters says. Coaching workers, holding them accountable for their actions, and showing employees how to improve are all strategies that inspire staff and lead to better retention.

Keeping skilled employees supports a restaurant’s bottom-line in two ways: it costs anywhere from $2,000–$15,000 to replace an employee and inspiring return visits often depends on having staff that knows their customers and invites them back. “The better the service, the more guests return. The keys to creating great hospitality are when customer needs are anticipated,” Peters says.

To keep employees engaged, they want three things, Makris, the Johnson & Wales professor, says: One, flexible hours; two, work-life balance, including some personal time and vacations; three, better tip structure so everyone shares in it, not just servers and bartenders.

The restaurant culture that maximizes retaining valued staff “appreciates employees. They’re your biggest asset, not the equipment or the building,” Makris says. Recognizing employees for their efforts sends a very positive, reassuring message to staff, he adds.

In smaller cities such as Providence, Buffalo or St. Louis, restaurants can’t draw from the pool of writers, photographers, and actors New York, Los Angeles, and Chicago can, and often attract students attending college. They need training, onboarding, and flexibility about their schedule to retain them.

At Union Square Hospitality Group, retaining staff is a priority

Retaining talented staff is a priority at Danny Meyer’s famed Union Square Hospitality Group, which includes 18 restaurants, including Union Square Café, Gramercy Tavern, and Blue Smoke, says Erin Moran, its chief culture officer. It clearly states expectations in terms of skills, qualifications, knowledge, and experience, and describes the earnings potential at every level and what skills are required. “We try to attract people who are interested in having a career path rather than a job,” she says.

During staff recruitment, the group looks for core values such as integrity and entrepreneurial spirit and applicants role-play several behavioral situations, and meet with the team to determine whether there’s chemistry between them.

Once hired, its training encompasses cultural and technical issues and servers usually spend about a month “shadowing” a more experienced employee before being left alone on the floor. Servers learn where to put the knife and fork, which glass to pour specific wines, and learn about the menu, including any allergies in the food, Moran says.

“We try to attract people who are interested in having a career path rather than a job." — Erin Moran, chief culture officer at Union Square Hospitality Group. 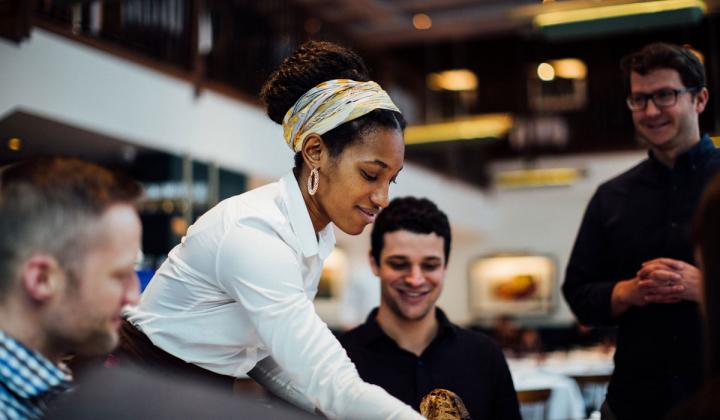 Staff that works 25 hours at the Union Square Hospitality Group is eligible for medical benefits, and after a year, receive 401K matched funds, and paid parental leave for the first four weeks and 60 percent the second four weeks.

Servers move through three levels: the 100 level, or competent servers; 200 level are trainers; and 300 are considered unicorns and reach the top tier and prefer staying in this job rather than moving on. Each level up entails higher pay.

Staff that works 25 hours at the Union Square Hospitality Group is eligible for medical benefits, and after a year, receive 401K matched funds, and paid parental leave for the first four weeks and 60 percent the second four weeks.

Despite its high retention level, Moran says that some staff leave for a variety of reasons, including considering New York City’s expensive landscape, changing careers, or finding better opportunity elsewhere.

The crux, she says, is creating an “inclusive work environment where people can be their best and are encouraged and supported to learn and grow.”

It’s all about creating opportunities

Keep in mind that for many restaurant employees, it’s their first job, whether in the kitchen or servers, says Robert Maynard, CEO and co-founder of Famous Toastery, a chain of 35 breakfast and lunch, full-service restaurants, with 11 company-owned and 24 franchised. Anyone can work in a restaurant—employees don’t need a college degree, unlike becoming an accountant.

At Famous Toastery, the key strategy to retaining staff involves creating opportunities. Employees can move to another location out of state, become a manager in a franchised location, or become a regional manager who is provided with a free company car that is wrapped around the restaurant’s logo. “We have people who started as dishwashers and are now managers running a restaurant,” Maynard says.

Since Famous Toastery is open from 7 a.m. to 3 p.m. daily, it offers the work-life balance that many bars and late-night eateries cannot. “It’s one place where you can work in the restaurant industry and be home by 3:30 p.m.,” Maynard says. Managers also give staff off two days in a row so they can recharge.

Having employees that stay for many years encourages customers to return. “When customers walk in, staff knows their name, anticipates what they order, and even knows the name of the family’s dog. Breakfast is a personal meal, and it’s shared by the staff,” Maynard says. 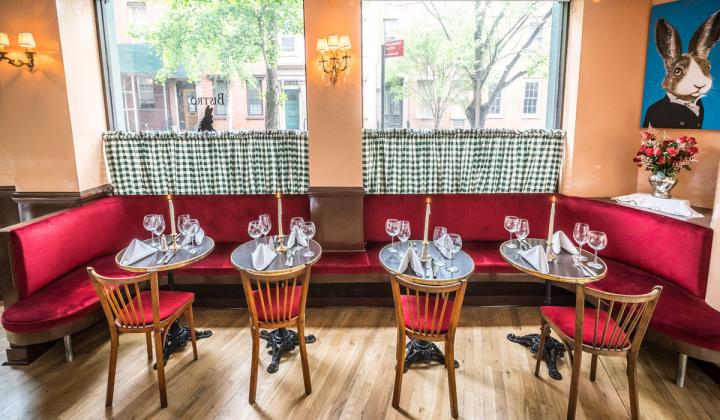 Harold Moore, the chef/owner of Bistro Pierre Lapin, has encountered a slew of millennial employees that leave for several factors, including better working conditions and pursuing other interests.

Retaining millennials is no easy task

Retaining the growing number of millennials that work in restaurant can be complex and tricky, says Harold Moore, the chef/owner of Bistro Pierre Lapin, a French restaurant located in Greenwich Village in New York City. “It’s very hard to keep millennials motivated in this era of instant information. They need to be stimulated almost constantly,” he says.

Yet, ironically, most tasks executed in the restaurant are repetitive. How many new ways can a sous chef cut a string bean?

Moore has encountered a slew of millennial employees that leave for several factors, including better working conditions, pursuing other interests, extended vacations, easier schedules, and in his words, “the list goes on.”

What works most effectively in retaining millennials is managers’ being as flexible as possible with their schedules, teaching them new tasks, and “feeding them, both food and knowledge,” he says. He has even created new job titles such as junior sous chef and shift leader.

Makris recommends these strategies to keep employees happy: Onboarding when they start followed by regular weekly training to update skills. Offering value-added items such as supplemental health insurance to cover sick days. Always remember to recognize employees for their efforts.