“One of my favorite menu items at Toups South is the Smoked Foie Gras Terrine.”

I’m a fat boy at heart, so I believe in having a little sugar with my salt. I like a little crumbled salt on top of my chocolate torte. I don’t believe in all these rules that you have one or the other at a certain time. Why not start sweet and end salty?
August 2017 Isaac Toups

In 2012, Chef Toups and his wife, Amanda, opened Toups’ Meatery, featuring modern Cajun cuisine. In October, they opened Toups South in New Orleans’ Southern Food and Beverage Museum. Here, he’s “broadening out to all of the South, everything from East Texas barbecue to South Carolina she-crab.” 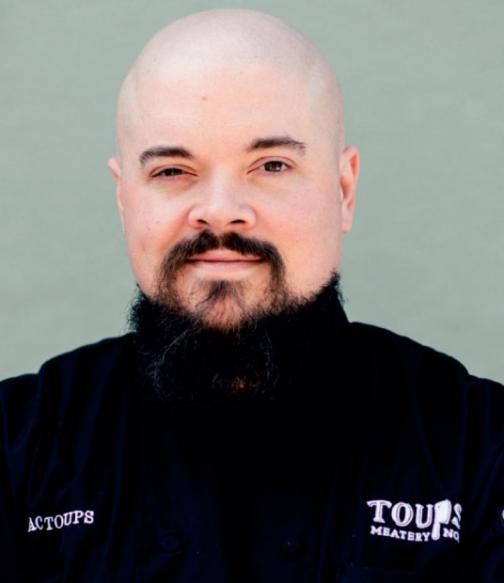 On Identity: Every Cajun is Southern, but not every Southerner is Cajun.
On Cracklins: There’s no wrong way to eat ’em.
Freakin’ Amazing: Dipping cracklins in Chicken Liver Mousse.
Diner Demand: We sell 1,000 pounds of cracklins a week.
Best Gift: Aaron Franklin’s original smoker from Franklin Barbecue in Austin, Texas.

Confusing cracklins and chicharróns—that’s  the big argument. Chicharróns are just puffed skin; where a cracklin, or Cajun gratton, is a skin-on pork belly that has been twice fried, very similar to pommes frites. Cracklins are rendered down until the skin dehydrates, but the fat stays juicy; then they are cooled down and refried again in hot peanut oil so the skin gets crispy, but the fat is still juicy.

I love the decadence and flavor of foie gras, but I’m not traditional. I’ll marinate foie gras in Japanese smoked whisky and use Aaron Franklin’s original smoker and give it a cold smoke. Then I reform it into a terrine, chill it, and serve it with fig jam. People say: “Smoking foie gras? That’s not traditional.” I say, “To heck with tradition, put it in your mouth!”

“Save the wetlands” is not something I say passively. I’m overtly passionate about it—they are my homeland. They quite literally protect New Orleans from being inundated with water and they sustain my livelihood. If they go away, we won’t have the land, the culture, or the seafood. We stand to lose it all.

There’s a plan touted by scientists and politicians—who some think are boring or liars—but I can relate to the fishermen. They sometimes don’t want to move their oyster beds or boats. But I’m Cajun; I’m one of them. I can say, “I get that you don’t want to move because your family has been harvesting oysters there for 100 years—but if you don’t move, no one will have anything.” We all have to change; we all have to move a little bit.