Chef Sylva Senat plans to relay his newfound celebrity into a mentorship role with young black chefs in the industry.

Chef Sylva Senat's run on "Top Chef" has made him a role model to aspiring culinary students of all backgrounds.
February 2017 Danny Klein

Chef Sylva Senat’s 7-year-old daughter, Yuki, was over it.

“She complained to my wife that daddy is always on television. Then she goes to her room,” Chef Senat says with a laugh, adding that she did, at least, last three good episodes.

On February 2, Chef Senat, the last rookie standing, was eliminated in the 10th week of Bravo’s hit series “Top Chef.”

Yuki’s reaction brought to light a certain reality for Chef Senat. Unlike his appearance on Food Network’s “Chopped,” this stint in the limelight wasn’t going to be a brief one.

As Chef Senat continues to duck low during the show’s airing, he is charting a plan for the future. Along with some partners, “there’s a thousand ideas and we have this giant board, and we’re just throwing them on there,” he says.

His daughter’s reaction, even in its levity, made Chef Senat consider how he got here. Of course, the $125,000 prize played a lead role in his joining “Top Chef.” As did the ultimate boost fame would offer Chef Senat’s budding career, which includes a consulting company, the Dos Tacos concept, and soon-to-open Maison 208 in Philadelphia. 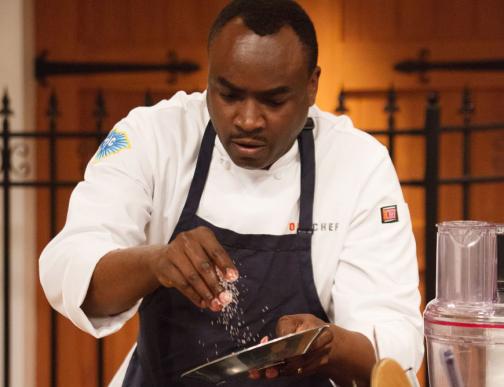 But there was something else at play as well, something that dips deep into his personal story. When Chef Senat was a student at John Dewey High School in Brooklyn, he met Richard Grausman, a cookbook author who, in 1990, piloted a French cooking program in 12 New York City classrooms. That evolved into the nonprofit Careers Through Culinary Arts Program—the same organization that walked through Chef Senat’s classroom door that afternoon.

The program helps underserved students gain the skills, experience, and contacts to enter the foodservice industry. That’s exactly what it did for Chef Senat.

Another less publicized reason he joined the show speaks to this sentiment and, specifically, how it relates to the plight of black chefs throughout the restaurant industry. In 2014, according to the Bureau of Labor Statistics, 15 percent of the 430,000 chefs in the U.S. were African-American. The State of the Industry Diversity Report also showed that black chefs account for 16 percent of restaurant employees, but only 7 percent of managers.

The problem being: When the corporate ladder has no top rung in sight, it can be impossible to start climbing. This is something Chef Senat hopes his newfound celebrity can help remedy.

“There have been times, where as a black chef you sit back and you look at it like, ‘Is Marcus Samuelsson the only one that I have to look up to at this current time?’” Chef Senat says. “I know there were the greats before him, and he knows that, too, but other than Marcus Samuelsson, who else is out there? And I don’t know if it’s PR or merchandising or whatever it is, and I know there are tons of great black chefs out there, but we don’t know of them. And we would just like to know more of them, I think.”

Chef Senat, who hails from Port-au-Prince, Haiti, has kept sight of this challenge throughout his career.

Looking to land a scholarship for college, he began an externship at the now-shuttered Sign of The Dove, a Manhattan fine-dining icon for more than three decades. Chef Senat would ride the subway from the first stop in Brooklyn all the way to 63rd street in the big city.

“It was just everything that those old, great classic restaurants that you imagine had. … For me, it was that world physically being explored and I just wanted to learn everything about it,” Chef Senat says.

Eventually, he was able to secure funding for half of the tuition needed to attend The Culinary Institute of America, but it wasn’t enough.

“My father was like no son of mine is going to be a cook. I had to basically show him or explain to him that it’s not a cook, it’s a chef. Restaurants, there’s money in it,” he says. “And that argument from a 19-year-old to your dad, it doesn’t go your way.”

“This industry, in general, is pretty hard. But as black chefs it’s just that we kind of get stuck when it comes to the hierarchy in the kitchen.” — Chef Sylva Senat.

Chef Senat stayed at the restaurant until it closed in 1998. As doors started to open, his father’s advice reinforced the challenge ahead. Grausman introduced him to Samuelsson, the luminary who led Aquavit at age 23 and would go on to open Red Rooster in Harlem, and Chef Senat began a three-year run at Aquavit.

“For me, as a black chef—I was a black cook at the time—I was one, if not two, in every kitchen that I worked in. I said to myself that I won’t work in a restaurant that [is rated less than] three stars,” he says. “I just wanted to be taken seriously for this craft. And it’s not like the lower-star restaurants didn’t matter, it’s just at the time that I wanted people to see that I was serious about this craft and I wanted to learn from the best. So therefore my resume would resonate that.”

And this dictated his career plan as well. If, after three years, Chef Senat felt like he couldn’t climb any higher, he left. He next went to Jean-Georges’ restaurant at Trump Hotel. He became the sous chef in three years and left again. After serving as co-chef de cuisine at Jean-Georges’ 66 Leonard Street and Mercer Kitchen, he headed to Stephen Starr’s celebrated Buddakan in New York.

During his time there, Chef Senat entered a three-day competition put on by renowned Chef Daniel Boulud. He won, sending him on a four-month journey to be trained at Institut Paul-Bocuse in France. Future stops included Buddakan in Philadelphia and chef duties at fine-dining Tashan. Since then, Chef Senat has been in the business of opening his own restaurants and forging ahead with his brand.

“This industry, in general, is pretty hard. But as black chefs it’s just that we kind of get stuck when it comes to the hierarchy in the kitchen,” he says. “There are not a lot of black chef owners or executive chefs. You tend to just end at chef de cuisine and I think you have to struggle and you have to fight to get more than that.”

Chef Senat currently mentors C-CAP students whenever he can. He says the program does a great job opening a lifeline where members can feel like they have a college adviser at the ready, and someone who can point you in the right direction before you get lost and can’t turn around.

“I just want more and more young black chefs in this industry,” he says. “You have to just keep keeping at it, you know? There are a lot of young black chefs out there but you have to be extraordinary enough where you’re noticed and you’re given the credit that’s due.”

"In my kitchens," he continues. "I don’t want to turn down or turn away a 17-year-old. No matter of color or gender. When I see that spark of fascination and that glimmer of them wanting to learn and wanting to be a part of this industry, I just kind of go into teacher mode. And I definitely want to give back. I want to be a role model to whomever I can."