Kish's first restaurant is all about inspiration.
January 2019 Juliet Izon

Chef Kristen Kish’s favorite dish at her restaurant Arlo Grey is, at first glance, a perfectly executed, elevated plate of pasta. Made with malfaldini, a skinny, elongated, and crimped pasta that resembles the sleek cousin of lasagna, it’s served with an umami-rich sauce of mushrooms, pearl onions, and a shower of Parmesan cheese shavings. Of course, a fluency in Italian food wouldn’t be surprising for Kish, who trained under legendary Boston chef (and pasta maker extraordinaire) Barbara Lynch. But the inspiration for this dish actually came from an even earlier formative experience, her mother’s—literal—out-of-the-box cooking. “My mom used to make beef stroganoff Hamburger Helper,” Kish recalls of her childhood dinners. “This dish kind of satisfies that need, but also, it’s completely homemade using classic French techniques.” 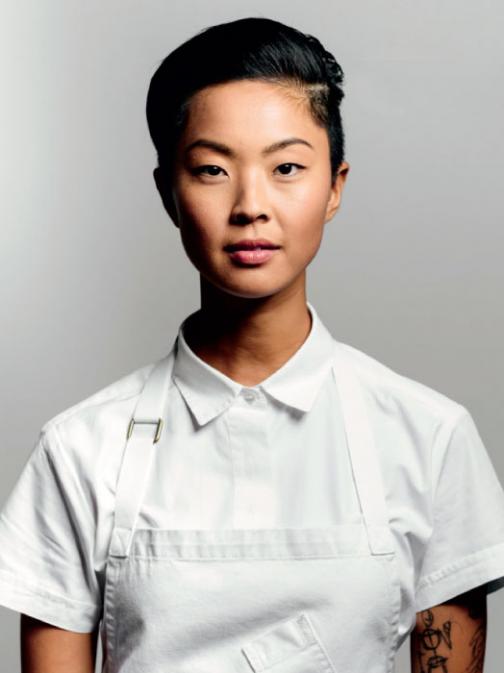 Favorite movie snack: Skittles or Twizzlers.
Go-to breakfast: Coffee.
Kitchen tool you can’t live without: My knives, spoons, and tweezers.
Who is your favorite person to cook for? Anyone that I love and care about.
Favorite ingredient to cook with right now: That’s hard. There are so many different ingredients that make up the entirety of a dish that it’s really difficult to just say one, because one needs the other.

Perhaps the greatest hallmark of Kish’s cuisine, then, is her ability to meld two (or more) seemingly disparate cuisines into one cohesive and delicious whole. At Arlo Grey, which opened this June inside The LINE Austin hotel in Texas, influences from her Midwest childhood and her professional experience cooking French and Italian food are all on display, sometimes interweaving in surprising ways. Take, for example, the dessert titled “lunch box chocolate cake”: a chocolate-covered orb served with a side of crunchy potato chips. “Growing up, my dad would pack me a lunch, and my sandwich would always get smooshed from the ice pack,” Kish explains. Rather than eat the smashed sandwich, she combined her lunch’s other offerings for a salty-savory treat: a Hostess cupcake and a bag of potato chips.

Finding common ground isn’t just a skill that Kish uses in her cuisine: it is also necessary in her business relationships, like choosing to open her first solo restaurant in a hotel as opposed to on her own. “Obviously, if you’re a chef and you choose to go into a restaurant partnership with a hotel brand, the partnership has to be fitting for what you envision,” she says. “I think for me, it’s definitely far more fitting [than being on my own]. It came with a ton of creative minds, creative space, resources, and a brand that was already built. It made sense. When I compare the two—and I’ve thought about it a lot—there are not many negatives.”

Of course, Kish was far from an unknown quantity for the LINE team. Since winning Season 10 of Top Chef in 2013, she’s been one of the country’s most high-profile chefs, co-hosting 36 Hours on the Travel Channel and penning her first cookbook, Kristen Kish Cooking: Recipes and Techniques, last year. But it took several years of working outside the kitchen (she left Lynch’s celebrated Menton in 2014), before Kish was ready to resume her place behind the burners.

And while any restaurant takes time to get into its groove, Kish is pleased with the first few months of service: “Opening a restaurant and conveying your message through food and service, it takes time. And it takes time to cultivate the flow,” she says. “It’s definitely been a lot of learning experiences and a lot of growth, but a lot of really proud moments as well.”

The chef also had the added load of moving to a new city and learning its food culture, just months before Arlo Grey opened. But after living in Austin for the better part of a year, the chef is quite enamored of the city’s self-proclaimed “weird” vibe. “I love the food scene because it’s so eclectic and it’s so different,” she says. “Texas has a lot of things to offer, everything from the small, urban farms and their beautiful greens, to the beef.” And while Kish is embracing many Texan ingredients—all of the restaurant’s beef comes from the Lone Star State—don’t expect to find every local specialty on the menu. “The one thing that I don’t do is barbecue,” she says. “There are so many people that do it far better than I can.”

You won’t find anything on Kish’s menu in which she is not fluent. Her restaurant is not just her place of business; it is her life story writ large. Arlo Grey, in fact, is the chef’s favorite baby name. “It’s what I would have named my first child, had I wanted children,” she says. “[But] a restaurant is very similar to having a child, it needs love, attention, babysitting, and discipline: all the things you’d describe of a newborn baby. And for me, a restaurant is my love and my baby.” It’s no surprise then, that the restaurants that have become Kish’s favorites share a similar, personal sensibility. “The places that I really gravitate toward are the ones that showcase the story of a person, as opposed to anything else,” she says. “Food is love, food is very personal, and any chef that can give me a story is something that I really love.”

And, like any good parent, Kish isn’t pressuring Arlo Grey into any prescribed path. “I don’t carry the goals of being ‘the best of’ or being on this list and having that review,” she says. “I go off of our [restaurant] family being supported. Are we learning? Are we growing? Are we constantly shifting? Are we doing things to the best of our ability and learning from our mistakes? Are we celebrating the successes?” Kish, of course, also hopes this is apparent to guests. “We put an immense amount of time, care, and effort into everything we’re doing,” she says. “So, I hope it’s translated and appreciated.”