A boutique hotel in Boston is the perfect forum when a chef serves as envoy for the marriage of Cuban and Korean cuisine.
October 2017 Amelia Levin

Call it a mashup or the new fusion or what you will, but the blending of Latin, Asian, and other cuisines continues to take shape on restaurant menus across the nation.

Some say this is simply modern American food, as increasingly people of all different backgrounds and cultures come together. One such culinary pair is Executive Chef Tatiana Pairot Rosana, a first-generation Cuban-American, and her wife, Alexis, who is Korean and whose background and family recipes inspired many of the dishes at the Outlook Kitchen + Bar at The Envoy Hotel in Boston. 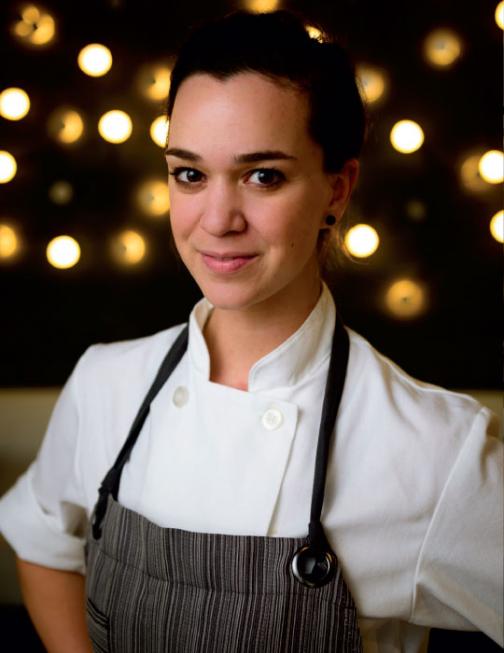 But rather than re-creating a melting pot situation where flavors meld so much they become watered down, chefs like Rosana have sought to pinpoint distinct flavors and ingredients from Cuban and Korean cuisine that naturally pair together to create new takes on old classics.

“The menu here was always progressive American, and it changes every six months, but the changes in the last six months were new ones I introduced,” says Rosana, who has served in her role for two years and  thanks The Envoy Hotel for giving her the freedom to cook the dishes she loves to eat. “My philosophy on cooking is to make people feel something, so I try to tap into emotions. When creating the latest menu, it was just natural for me to want to incorporate flavors from my childhood and my wife’s childhood because we were so familiar with them and many of the ingredients in both cuisines are very similar.”

Some of those common ingredients include things like garlic, cilantro, black pepper, citrus, and pork.

For Korean-inspired pork bao, Chef Rosana braises the pork shoulder in a Cuban mojo recipe from her grandfather with citrus, orange, garlic, and black pepper. She stuffs the pork into homemade buns and tops them with a light barbecue sauce from Alexis’ family.

For a popular seafood dish, Chef Rosana played on a traditional Cuban dish of shrimp cooked in a spicy tomato sauce, but swapped chunks of tomato for a tomato water. And she used gochugaru, a Korean dried chili flake spice, instead of fresh red pepper flakes. “The dish is so reminiscent of fish I grew up on, but it is lighter and there’s that touch of Korean flavor,” she says.

She’s also seasoned her white bean purée and a common Cuban bean dish with other Korean seasonings like gochujang, which are those same Korean dried chili flakes but ground into a paste. One that’s become a hot commodity among chefs as of late.

Working under the umbrella of a hotel makes it easy for Rosana to source all sorts of ingredients used both in Cuban and Korean cuisines, but she’ll also track down her specialty food purveyor or make trips to the local Korean grocery store to fill in any gaps.

To learn more about Korean cooking, Rosana spent hours studying classic recipes and cooking techniques as well as looking to her wife, also a chef, for inspiration. She is often trying different soups, stews, and flavors to create new taste memories and be able to integrate them into her Cuban cooking.

At the Mandarin Oriental, where Rosana spent four years prior to joining The Envoy Hotel, she was somewhat restricted by the hotel’s brand and concept in terms of introducing more of her Cuban heritage—now at the boutique hotel, she’s lucky to have a younger clientele looking to try new dishes. And it’s working: She’s had nothing but positive feedback from her guests.

“I like to try to make dishes familiar enough so people recognize the flavors, but they are not strictly Korean or Cuban,” Rosana says. “There might be one or two different flavors that keep them coming back. My favorite thing is when someone comes up and says, ‘I’ve eaten pulled pork for years, and I’ve never tasted it quite like that.’”

And that’s the mark for a modern American chef.