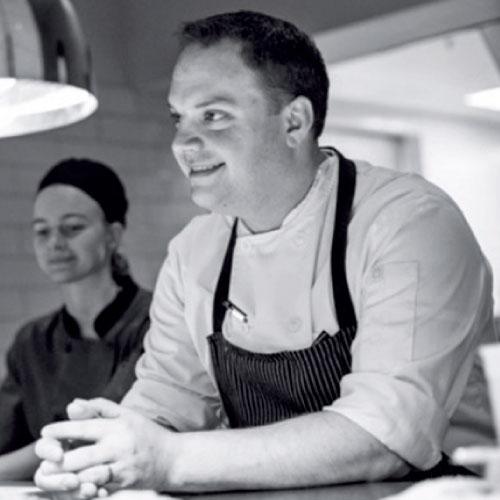 This was the second time I competed in the culinary Olympics [the Internationale Kochkunst Ausstellung Culinary Exhibition in Erfurt, Germany, where he led the American Culinary Federation’s Team USA to a fourth-place ranking], but it was my fourth international competition as I also did the World Cup in Luxembourg in 2010 and 2014.

For the years I was competing, there was no life balance. I was given an ultimatum: Choose between your job and the team; and I chose the competition. Was it a good thing? I don’t know. I left this great country club job, but I just needed to go and win—to finish this for myself. People were like, “Dude, you’re crazy.” But I didn’t care; I was that determined and that obsessed.

And I’m obsessed with my career, but competitions make you overly obsessed to where that’s all you think about. You have to be somewhat mad to want do to this.

What else did I bring back from the Olympics? Restraint and patience.

Like our foie gras dish at Elaia is a mousse of foie gras with vanilla poached pineapple and marinated grapes, grape coulee, celery salad, five spice crisp—so the dish has a little more technique in it, but the delivery is very simple. Instead of putting 5,000 little dots and having 50 micro-leaves on the plate, you’ve got to think: “How much sauce do I want to eat with the foie gras? How’s it all going to be balanced? How is it going taste when it’s all put together?” That’s what I meant about showing restraint, instead of throwing everything in your arsenal at the plate.

I’m probably hanging up the competing apron. In the end, you get a handful of medals and paper. Does it hold any weight? Sure it does; it was one helluva ride. I’m very grateful for everything it did for me. But there comes a time, when there has to be more balance.