After five years as a cocktail-only spot, Alley Twenty Six’s owner Shannon Healy took advantage of the sudden availability of the space next door to his downtown Durham, North Carolina bar and built a kitchen. “Usually restaurants build a cocktail program around the food, not the other way around,” says Carrie Schleiffer, a Gramercy Tavern alum and veteran gastropub chef who was recruited to head up the kitchen and creation of the food menu that officially launched in February 2017.

But the facilities, however new, weren’t the biggest. And even though Schleiffer had worked with small workspaces at Durham-based Bar Virgile—another gastro-cocktail bar—and the now-closed G2B Restaurant and Brewery, taking over Alley Twenty Six’s kitchen took some creativity. To make use of the tiny space, many elements are mobile, including the grinder that sits on a cart with wheels for easy in-and-out access. 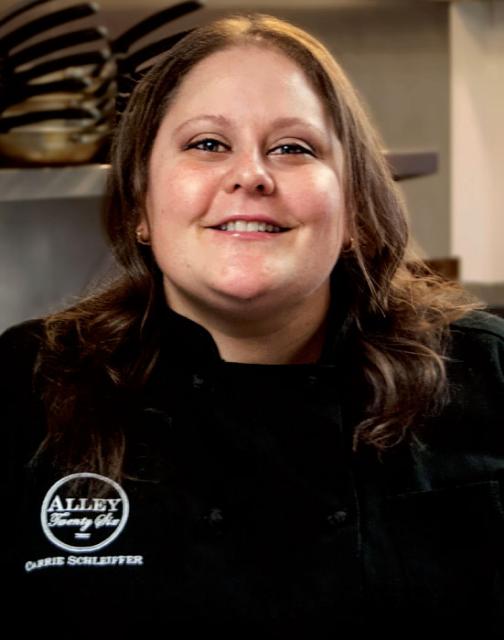 “During the day we do all of our prep and then transform the kitchen at night for service,” Schleiffer says. Filling out the rest of the kitchen are a couple of stand-up refrigerators, a small flat top for the burgers, a six-burner range, and two convection ovens. There’s no room to make cured meats, so Schleiffer took the fresh pâté route, something she can easily whip up without the need for extra cooler space. She brings salumi and cheese in from local artisans, but most everything served up in the inviting dining/bar space is made in-house.

Rather than focus on one particular cuisine, Schleiffer chose a mashup of different global influences and dish sizes with an elevated bar food approach to fit with the $11 to $16 cocktail menu. The dishes—which rotate and change frequently—range from bar snacks like maple bacon pecans, terra chips, and scotch eggs, to small plates like house-made chicken liver mousse and Hawaiian-style poke, to meal-sized dishes like burgers and ragouts. For a twist on a New Orleans specialty, Schleiffer serves fried oysters with a spiced cornmeal batter and spicy remoulade sauce. The salmon poke has a Japanese influence, with fresh ginger, pickled red onions, pickled cucumbers, soy sauce, sesame oil, a garnish of tobiko, Sriracha aioli drizzle, and crispy wontons for scooping. And for a Maine- and Boston-inspired roll, Schleiffer has swapped lobster for butter-poached shrimp mixed with mayo served on a toasted brioche bun.

No surprise, the burger remains one of the most popular dishes on the menu. “We grind our meat in house and serve the eight-ounce burger with black truffled cheddar, a bourbon bacon jam, a chipotle aioli I made in-house, and fresh arugula,” Schleiffer says. “We wanted to have something like a bacon cheddar burger on the menu but to take it up a notch.”

On weekdays, the kitchen opens at 5:30 p.m. and stays open until 11 p.m., with cold food served until 2 a.m. On weekends when there’s extra help, customers can order from the full menu throughout the night. “With the exception of one or two items, our menu is constantly rotating and evolving, because we are a bar, but we are also a neighborhood place. We want people to be able to come in multiple times a week and not have to eat the same thing,” she says.

Of course, the food menu at Alley Twenty Six is paired with the restaurant’s beloved cocktail list; the printed menu suggests specific drinks with different foods—like lamb loin chops with quinoa, toasted cashew, spiced yogurt, kale and pomegranate paired with the Respect Your Elderberries cocktail of Conniption American Dry Gin, local elderberry syrup, bitters, and absinthe—and Schleiffer works closely with the bartenders to create dishes and provide ingredients for the drinks. “Just like we serve seasonal food from the kitchen, our bar focuses on seasonal ingredients and flavors using homemade syrups, cola, and sodas,” she says. “Most recently I helped make a sweet potato syrup for a wintery drink.”

Being able to serve food has transformed Alley Twenty Six into more than just a bar. “There are not a ton of places in our area that serve food until 2 a.m., so having that option has been really great for us,” Schleiffer says. “We just try to have things that are easy and accessible for us but also fun and interesting. Durham is growing at a rapid pace so it’s fun to offer different things to help us stand out from the crowd, especially later at night.”