The Chai Pani Restaurant Group founder shares how he’s expanded across concepts and cuisines to conquer both the Atlanta and Asheville markets.
December 2018 Juliet Izon

For restaurateur Meherwan Irani, the saying, “Necessity is the mother of invention,” was never more true in his life than as a newly immigrated grad student in Columbia, South Carolina, in the early 1990s. “The only Indian food option was a typical lunchtime buffet in a strip mall,” Irani recalls. “So that’s when I started cooking myself, in my dorm. Of course, my first attempts were laughable.”

But it was soon apparent that Irani had an innate aptitude for food, and he continued to hone his home cooking skills over the next decade, while still working full time in real estate development. “Then, 2008 rolls around,” he says. “And for the first time it occurred to me that, ‘You know, maybe I could get off this roller coaster—where my livelihood is in somebody else’s control—and figure this food thing out for myself.’ ” What that meant, he wasn’t sure, but he committed himself to the career change. As it happened, the idea for his first concept came to him nearly out of the blue. “The idea for Chai Pani appeared fully formed in my head,” he says. “And I knew exactly what I was going to do.” 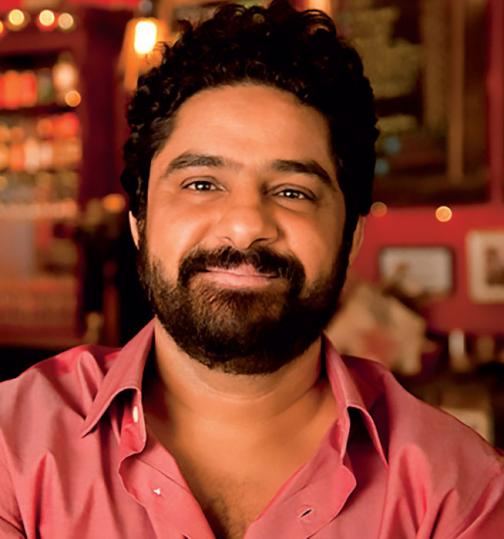 Favorite movie snack: Jerky.
Go-to breakfast: Literally eggs on anything.
Kitchen tool you can’t live without: A mortar and pestle.
Favorite person to cook for: Our team; they’re like a family.
Favorite ingredient right now: Rosemary. I’m finding more and more ways to mix it in with Indian flavors.

It wasn’t long before interested investors came knocking, hoping to replicate Chai Pani’s success in other markets. Irani opted to open the second location in Decatur, Georgia, in 2012, choosing it both for its similarity to Asheville and because his vice president of operations, Isaac Clay, has a brother, Joey Beard, who lived there and was able to do much of the groundwork. “It just boils down to relationships,” Irani says of how he successfully opens new concepts. “It was friends and family coming together to pull this off.”

But of course, Irani’s associates had to believe in his vision, and the chef’s ability to brand his restaurants with a compelling story is certainly a reason his concepts are so well-received. After all, how many restaurateurs pivot from Indian street food to Eastern Carolina-style barbecue? But for Irani and his business partner at Buxton Hall Barbecue, Elliott Moss, it was as simple as applying the same successful formula used at Chai Pani to a different type of cuisine. “It’s so competitive, it’s not enough just to make good food,” Irani says of the restaurant industry landscape. “Everybody’s making amazing food right now. So, how do you differentiate your story from the other person’s story? Everybody’s story is unique to them, and they should tell it.”

And like Chai Pani is drawn on Irani’s childhood memories, Buxton Hall is rooted firmly in Moss’ Southern upbringing. The duo even road tripped through the Carolinas for inspiration, stopping at all of Moss’ favorite haunts. “I had a sense of the culture, the people and the feeling of the South, but going out there and learning the story of barbecue and Elliott’s story—I went and spent time with his family—I really got a sense of, ‘Yeah, there’s a story here to tell,’” Irani says.

The result is, unsurprisingly, delicious. The restaurant’s specialty, of course, is whole-hog barbecue that’s been cooked for 18 hours and then coated in the Eastern Carolina hallmark of a vinegar-pepper sauce. It’s served with the holy trio of creamy slaw, pickles, and cornbread. But diners can also nibble on elevated takes of fried green tomatoes (accompanied by hog fat aioli and goat cheese) or a double pimento cheeseburger, served on an onion brioche bun. And like Chai Pani, the branding and the story of the restaurant is obvious from the moment one steps inside the homey space. “You need a chef that has a vision—who’s really specific about what he wants to do—and then find a way to let everybody know,” Irani says. “When you walk into Buxton Hall, you know you’re in a barbecue restaurant.”

Irani’s other concepts, from the “electric Bollywood” whimsy of cocktail bar MG Road Bar & Lounge in Asheville to the Indo-Persian kebabs at Botiwalla in Atlanta, are similarly confident in their visions. The latter, with its fast-casual menu of grilled meats and flatbreads, is poised to be Irani’s breakout star. “There’s always going to be room for a sit-down meal somewhere, but I think more and more people are liking that space in between fast food and sit-down dining,” he says of Botiwalla’s relaxed atmosphere. “I developed that concept specifically for growth,” he says. “We’re looking to open eight to 10 in the next five years.”

The chef, recipient of three James Beard award nominations for Best Chef in the Southeast, is never one to rest on his laurels. Aside from managing his fleet of restaurants, he’s also in the process of expanding his spice company, Spicewalla, from restaurant business to direct-to-consumer use. “I’m a serial entrepreneur,” he says. “If there are ever opportunities for concepts that tell fun stories, I’m all over it.”