The Pioneer of Peruvian Cuisine

Highlighting the flavors of his home country in dishes inspired by health and history, Chef Emmanuel Piqueras is a master of this hot weather
June 2018 Amelia Levin

In fact, Piqueras is one of America’s pioneers of Peruvian food. He served as Peru’s culinary ambassador to the U.S. and Canada in 2005 through Peru’s commission for promotion in exports and tourism, Promperú. He was executive chef at Andina in Portland, Oregon and the now-closed Mixtura in Seattle. When Piqueras helmed the kitchen at Limon Rotisserie in the Mission District of San Francisco, he quickly garnered a cult following that would regularly flock to his addictive rotisserie chicken—which he brines for two days, then marinates in a puréed mixture of Peruvian chilies, garlic, onions, oregano, cumin, and other spices for three more days, and then spit-roasts for hours until succulent.

In 2008, Piqueras opened Panca in New York City’s West Village, where he occasionally returns to oversee operations. It was also in New York where Piqueras co-produced and hosted “Sabor & Fusión,” a popular Peruvian cooking show co-produced by Canal Sur Perú and Latinova Group. 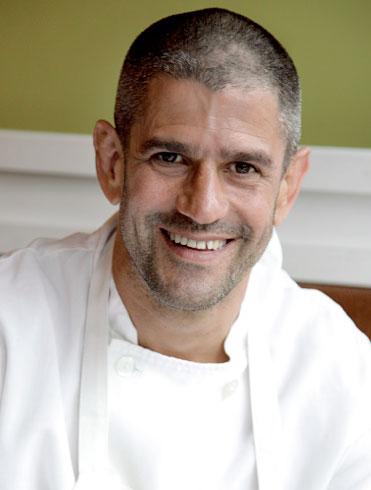 Nowadays, Piqueras spends most of his time with his family in San Diego, where he focuses on Peruvian food and flavors at Pisco Rotisserie & Cevicheria in the historic Liberty Station neighborhood and Carlsbad, just north of San Diego. The former was opened last July with restaurateur Sami Ladeki, with the latter following just six months later. “Peruvian cuisine is still relatively new to San Diego, but we have been very busy and are still enjoying the honeymoon phase,” Piqueras says. “The first restaurant did so well here, that’s why we opened the second location. We want to prove that Peruvian restaurants can be just as successful in Southern California as they are in other parts of the state and country.”

At the center of Piqueras’ menu is the pillar of Peruvian cuisine, ceviche. Rather than over-marinating the seafood for hours, he lets the freshness of the local fish shine by adding citrus juices and chilies just a few minutes before service, almost like a Japanese-style sashimi. One of his most popular ceviches is the Martini de Tigre, a combination of raw calamari, shrimp, white fish, bay scallops, and octopus quick-marinated in a lightly spicy, creamy blend of pureed lime and citrus juices, cilantro stems, garlic, and Peruvian aji amarillo peppers.

“I consider myself more of a ceviche maker than a chef or cook,” Piqueras says. “When I make ceviche, I’m telling the history and story of Peruvian culture and its influences from different people like Spanish conquistadors and Italian fisherman, as well as my own history as a chef.”

One of Piqueras’ earliest food memories is fishing with his grandfather Manolo, who would take him every year on his birthday to a fish town south of Lima, Peru called Pucusana. “Right after fishing, we would eat ceviche at this small restaurant in town and then go to his home to fillet the fish we caught for our own ceviche.”

Beyond conveying memories of Peru and its history, a driving force behind Piqueras’ menu is health. “I believe we don’t just feed people, we cure people with our food,” he says. Piqueras’ 3-year-old son, Julián, is a source of inspiration for this marriage of Peruvian cuisine and culinary nutrition. “I have been cooking for him since he was 4 months old, and I have learned the value of real food packed with nutrients instead of empty calories—we truly are what we eat,” he says.

In between fueling up on bowls of acai smoothies and kale-studded Peruvian quinoa, Piqueras incorporates many other superfoods—from chia and sesame seeds to beets, bok choy, and avocados—into his dishes at the restaurant. “We use Peruvian purple potatoes in many dishes because they have 40 times more nutrients than russet or gold potatoes,” he says.

Luckily, Peruvian food and drink are already naturally “healthy” and light, making it perfect for summer menus. San Diego—with its mild weather and coastal feel—is the perfect backdrop, too, for Piqueras’ dishes. “When I’m in Southern California, I feel like I’m in Peru,” he says. “It’s the perfect place to cook this cuisine, because we have access to incredible fish and produce from local farmers, some who even grow similar chilies found in Peru.”

Piqueras has also long been dedicated to telling the “melting pot” story of Peruvian cuisine’s diverse influences from Japanese, Chinese, Spanish, and French immigrants through his just as diverse dishes.

For a classic Chinese-influenced dish, he cooks a fried rice arroz chaufa on a high-pressure wok with slow-roasted pork, Peruvian chilies, cashews, a spicy-sweet sauce with soy, garlic, hoisin, and a fried, sunny-side-up egg. He’s also swapped the rice for red quinoa and added bok choy, kale, and extra peppers for a healthier version.

Everything’s washed down with pisco—of course—the national spirit of Peru, from punches made with pineapple and orange juice to classic sours made with fresh-squeezed lime juice, egg whites, and bitters. There’s even a prickly pear pisco for a just-as-refreshing twist that pairs well with the spiciness of the aji peppers throughout the dishes. It’s a summertime treat, sure, but one that seems to be working for Piqueras and his San Diego guests year-round.