Under chef Eddie, Santina’s menu became entirely gluten-free from small plates like the Squash Carpaccio to entrées such as the Eggplant Parmigiana.

In what she described as a “science project,” chef Ashley Eddie transformed Santina’s menu to be entirely gluten free, without most guests being none the wiser.
August 2019 Juliet Izon

In New York City, any mention of Santina is likely to solicit foodie adulation, particularly regarding its beloved chickpea pancakes. And in this case, the hype is warranted. Cecina—a savory Italian pancake made from chickpea flour—has become one of the city’s most unique and satisfying appetizers. The crispy, golden pastry arrives in a cast-iron skillet, with the guest’s choice of hearty toppings such as the spicy Calabrian tuna tartare or avocado served with tomato and almond pesto. Many diners follow this spread with one of the restaurant’s hearty, coastal Italian dishes, like lobster fettuccine made with spicy arrabiata sauce or chitarra with lamb sausage, mussels, and zucchini.

But for as intimately familiar guests are with Santina, few realize the menu is entirely gluten-free. After all, it seems impossible that the perfectly al dente rigatoni could be made without wheat or that the pillowy ciabatta-like sandwich bread could be created out of tapioca starch and rice flour. But such is the magic of executive chef Ashley Eddie, who took over the kitchen in June 2018 and has overseen its transition to an entirely gluten-free menu this year. 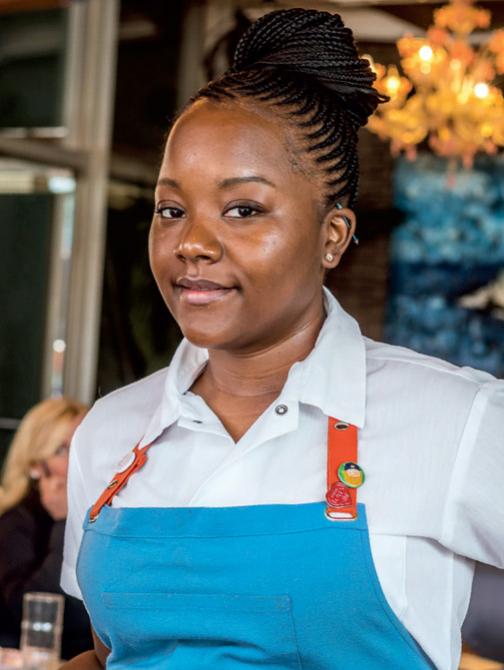 Kitchen tool you can’t live without: I have two, a chef’s knife and a Vitamix.
Favorite person to cook for: My mom, sister, and grandma.
Favorite ingredient to cook with right now: I love a lot of spice and citrus.
The last thing you read: The Silent Patient by Alex Michaelides.
Favorite way to destress outside of the kitchen: Spa days when I can get them

As for the response from diners? Well, it’s been rather underwhelming, but in a good way. “I don’t think people have noticed,” Eddie says. “But I get a lot of positive feedback, so we’re happy.” The only nod to it on the menu, in fact, is a small note in the bottom corner, which reads, “We are a gluten-free restaurant.”

For Eddie and her team at Santina, the switch to gluten-free wasn’t loudly trumpeted because for the restaurant, it wasn’t a ploy to lure in new customers or capitalize on current diet fads. “It’s not a trend for us; it’s just the way we do it,” she says. “And because we can do it so well, I don’t know if we necessarily need to advertise it. You come in and have this beautiful bowl of pasta, or you have a sandwich and get this nice, fluffy roll, and you don’t even think about it.”

The transition to gluten-free was made easier by the fact that almost all of the menu was already wheat-free except the pasta and sandwich bread (those adored chickpea pancakes, are naturally gluten-free, of course). And the restaurant, which is part of the much-lauded Major Food Group, was able to use sister restaurant Carbone’s pasta-making equipment when formulating its own recipes.

Creating breads and pastas without the use of what is generally considered the essential ingredient is almost like alchemy. “It can be hard to make good bread the normal way,” Eddie says. “Taking on something that’s already like a science project, you have to be on point with every single thing you do.” For Eddie and her chefs, that meant getting granular: baking with dry yeast versus fresh yeast, determining the best proofing location for breads, and sampling virtually every wheat-free flour available. The science project ended up being a fulfilling one for the team—and quite an accomplishment.

Diners would be hard-pressed to taste the difference between Santina’s gluten-free dishes and their traditional counterparts. The capellini pasta, for example, is a thin, delicate noodle, which can be difficult to master even with standard ingredients. Eddie’s version is perfect, with a toothsome bite that still retains its shape even in a sauce with juicy cherry tomatoes and chunks of sweet blue crab. The lunch menu features a trio of sandwiches, including a caprese grilled cheese and, recently, a hearty swordfish sandwich with pepper-onion slaw. They’re served on large rolls, with a tender crumb that’s just as satisfying as their wheat-based counterparts.

Perhaps because Santina has always been a destination for gluten-free eaters, even before the menu change, Eddie has noticed that the kitchen gets more than the average number of allergy notifications. “We get lists from people sometimes: nightshades, this nut but not that nut, parsley,” she says. “And we just try to be very accommodating. It can be a challenge trying to give diners that same experience, but I think we’ve learned to do it.” A basil pesto, for example, can be whipped up without the almonds for anyone with a nut allergy.

The accommodating atmosphere also extends to the kitchen itself, which Eddie has tried to remold as a space that’s supportive and team-oriented. “I’ve worked in kitchens where you don’t say anything; you just come in, start working, and ignore each other. It’s competitive,” she says.

In contrast, Eddie has now been at the Meatpacking District restaurant for years and worked nearly every station. It’s a background that makes her well-equipped to handle any obstacle—food or staff—that gets thrown at her. “I try to create an environment where we’re all helpful toward each other, we’re friendly, and we look out for each other,” she adds.